* Mariya Sajjad is an illustrious alumna of University College of London, United Kingdom with a degree of Masters in Art & Design Education 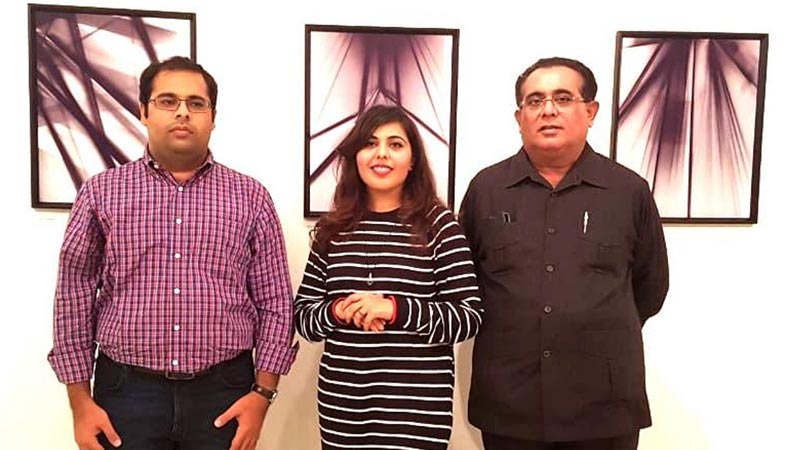 The city of Lahore is dotted with art galleries and two or three exhibitions are always running concurrently; however, sometimes these stand out for the nature of works they exhibit that are always altruistically oriented.

One such show by Mariya Sajjad on ‘darkroom photography’ has opened at Alhamra Art Gallery, Mall Road Lahore on November 4th 2019. Unlike most art exhibitions, this one aims not only at sales but at informing the art enthusiasts and public at large about dark room photography.

Mariya Sajjad is an illustrious alumna of University College of London, United Kingdom with a degree of Masters in Art & Design Education. Her area(s) of interest is in teaching pedagogies and reflective practices in the discipline of art and design. Therefore, she intends to inform her own artist performance from photography as means for learning and teaching in ongoing exhibition at Alhamra.

In her exhibited work labelled as Light Conundrum under dark photography theme, she has taken inspiration from an American academic, Daniel Reisberg who is currently associated with Reed College, Portland, Oregon. Reisberg core specialty is cognitive psychology and he focuses on imagery, memory and judgment, particularly in relation to emotion.

Mariya Sajjad, while developing her work of photography in dark room, engaged herself in looking at the manipulation and interplay of intrinsic and extrinsic characteristics of material substances with varying opacities and light intensities. It distinguishes between “visual perceptions”, as image of an object achieved ‘when’ and ‘as’ it is seen; “visual imagery” as the mental production of an object in its absence; and “spatial imagery”, as the production of mental representation of an object by tactile means. Thus, inspiration and outcome of images as “light conundrum” compel Mariya Sajjad to continue to explore dark room photography in the light of Reisberg notion.

Her exhibition has triggered to explore the phenomenon of visual and mental imaginary i.e. to what extent visual mental image is actually an image? This question has been debated in art circles for decades. One particular characteristic of an image in perception is that it can be examined more or less carefully, and additional information can be derived over time. For instances, if shown the uppercase letter A, people can readily verify that a horizontal line is present. Furthermore, they also can authenticate that there is an enclosed shape and that it is a triangle. They may not have noticed the triangle until asked about it but can easily “look more carefully” at the shape and classify that part appropriately.

In her exhibited work labelled Light Conundrum under a dark photography theme, she has taken inspiration from American academic Daniel Reisberg who is currently associated with Reed College, Portland, Oregon. Reisberg’s core specialty is cognitive psychology and he focuses on imagery, memory and judgement, particularly in relation to emotion

One way to address this issue is to compare the ease of accessing two types of properties in perception and imagery: those that are likely, “at first glance,” to be represented explicitly in memory; and those that, like the triangle in the A, are likely to be only implicit and to be accessible only after more careful scrutiny. That is, we conjecture that some visual features are encoded in memory explicitly by default, whereas others are represented only implicitly and must be inferred or derived from the explicitly encoded information.

Thus, an explicit visual property is noticed immediately, stored in memory as such, and subsequently can be accessed simply by looking it up in memory; in contrast, an implicit property must be derived by reorganizing what has been indoctrinated explicitly.

Even in perception, an internal representation is created as soon as a shape is registered after getting guided information, and this representation makes only some information explicit and immediately accessible.

Distinguish faculty members and students from PIFD, BNU, College of Home Economics graced the inauguration ceremony with their worthy presence on November 4th and later it was opened for general public. This rare and refreshing exhibition will continue till November 08th.

It is pertinent to mention the personal credentials of the artist. Attaining early education from Dera Ghazi Khan, a remote district of south Punjab, Mariya Sajjad is an art educator currently serving as visiting faculty member at Pakistan Institute of Fashion Design, Lahore. She has previously been associated with School of Visual Art & Design at Beaconhouse National University. She is also an active part of collaboration for a Teachers’ Training programme with Tareen Education Foundation which is significantly active in southern Punjab belt. Moreover, She presented her article titled, “Art & the City: Creating new spaces for (dis)engaging with extremism and radicalization: observation on the Pakistani society”, in the 4th International symposium on Teaching about extremism, Terror & Trauma at Concordia University, Montreal, 2018.

The writer is a freelancer. He can be reached at saudzafar5@gmail.com