* ‘Durj’ is loosely based on the events of cannibalism by two brothers, Farman and Arif, in Punjab 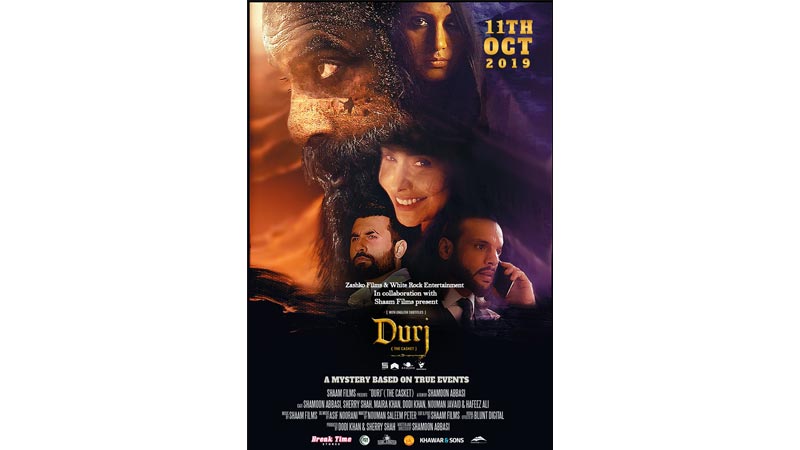 The ugliest version of ‘Beauty & the Beast’ ‘Durj’ directed by Shamoon Abbasi, finally made its way to theatres.

Disaster happens when true events becomes victim of fictionalize story, and cannibalism become the justification under the emblem of hunger.

The subject of the film was controversial, that is why it was banned in the first place but after some minor cuts, the censor board released it. Our hopes were high because something new endeavoured to emerge in the Pakistani industry after ‘Khuda Ke Liye’ and ‘Bol’, both directed by Shoaib Mansoor. But the film crushed our hopes.

Cast feature Shamoon Abbasi as Gul Baksh, cannibal, Sherry Shah as Laali and Maira Khan (psychiatrist) as Farah. Farah is looking for her husband Danyal, who disappeared mysteriously so she kidnaps Gul Baksh from high security prison to ask Danyal’s whereabouts because Danyal disappeared exactly from the same spot where Gul Baksh was recently arrested.

The subject of the film was controversial, that is why it was banned in the first place but after some minor cuts, the censor board released it. Our hopes were high because something new endeavoured to emerge in the Pakistani industry after ‘Khuda Ke Liye’ and ‘Bol’, both directed by Shoaib Mansoor

Soundtrack by Asif Noorani was good and haunting. Cinematography and locations of Balochistan were mesmerizing throughout. Acting of Shamoon and Sherry Shah must be appreciated. Shamoon’s acting was mix up of many characters like Alauddin Khilji (potrayed by Ranveer Singh), and different aspects of Joker, especially the sound he utter during conversations and his madness. Khilji’s and Gul Baksh’s scene of playing with fire were exactly the same.

Maira’s acting, as Farah, was totally irritating: audience rejoiced at her death. Screenplay was not good because two to three good dialogues aren’t enough to captivate audience for almost two hours. Additionally anyone can write few inspiring dialogues with the movie of almost two hours. Direction and story could have been better. Story was a complete failure because when you are working on actual events and as trivial plot as of cannibalism then the element of darkness must be implemented. The story was about two brothers but they converted it into bogus subject ‘love’. That’s where the insanity of story erupts. Both lead characters must have been played by male. When the connection and chemistry of Gul Baksh and Laali took place I heard the voice from my back, a friend saying to his friend “bhai ye kya dikhane laya hai, is kay Paise tu hee bhary ga”. As a ceniphile I felt that pain. After interval, no one was interested to bear it any further and my friends, Madni and Taj, were waiting for lights to be turned on.

Though some people think that ending was dark but it was satisfying. Satisfying in the way that the character which was irritating, dies. Durj would have been darker if at some point Gul Baksh had eaten Laali or Gul Baksh would have waited for a child to eat that was to be born. Or Danyal would have turned into cannibal then it would have justified the cannibalism as a sign of hunger. Contrary the message of Durj was justifying cannibalism to indigence. Hunger became central point without reason.

On the contrary, we must appreciate Shamoon Abbasi for bringing up the controversial subject but his execution on it was very poor. A heart-wrenching subject becomes ludicrous. Still, I would suggest you to go and experience it in cinemas because you can’t just expect a profound and powerful execution by films in Pakistan.