LAHORE: A thick blanket of toxic black smog engulfed the entire metropolitan of Lahore around 9pm Wednesday night, forcing many residents to either literally gasp for breath or complain about sore throats and watery eyes, murky smog cloaked the city of 11 million. 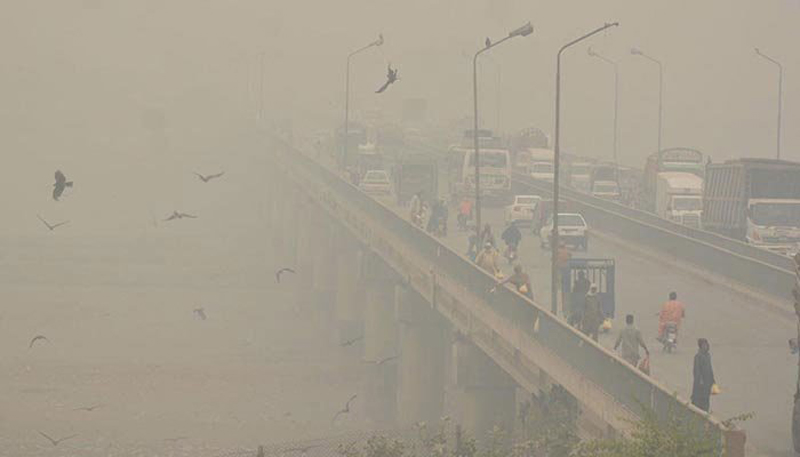 Parts of the city recorded an Air Quality Index (AQI) of 600-800, double the safety limits. In fact, Wednesday night was Lahore’s worst and most hazardous smog recording so far, this year.

Just spammed a bunch of people complaining about smog with this. We literally wrote you a draft! Please send this. Her email is in the tweet https://t.co/WQDopz8CQo

It’s the exact same situation in gulberg and the canal. There is smoke. My eyes are watering. And breathing is heavy. https://t.co/Uy2QOEdrod

There’s no stopping it. Thoughts with everyone who does not have the safety of masks and air-purifiers. I’m worried about so many people, there’s a strange dread and anxiety. #LahoreSmog#SaansLenayDo pic.twitter.com/oB09uzUF8D

To put this smog crisis in context:
If I, as an able-bodied & well-fed young adult sitting in one of Lhr’s safest areas, is struggling to cope with Lahore’s air, just imagine what the city’s poor, old, children, patients and homeless are going through rn.

Lahore is unbearable right now. The smog is impossible to escape.

We destroyed our water resources. Now our air is hazardous. We have turned elements of life into vehicles of death.