* To him, ‘Hunting is not killing animals mindlessly, but, it is a highly sophisticated, scientific and labourious, as well as, dangerous sport’ 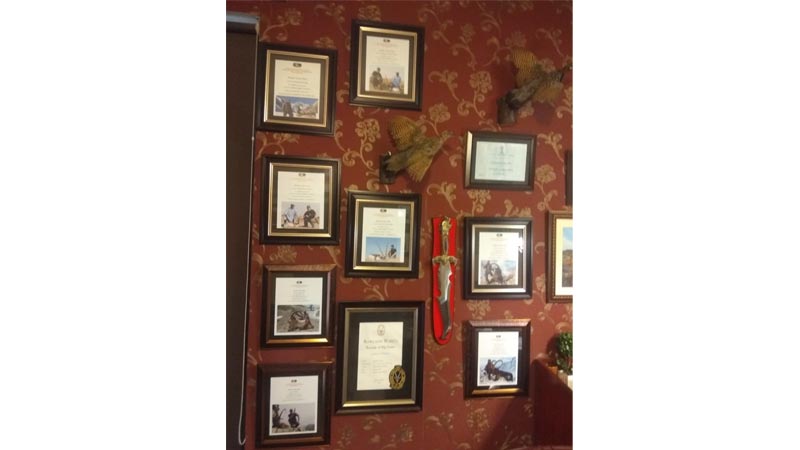 Hunting is his passion and obsession. The slightest instigation for the Big Game makes him completely restless and draws him towards the snow-capped highest mountain range in the world: The Himalayas, like a magnet pulls a nail towards it.

Hesham lives in Lahore and was Born into a highly respected Agriculturist family of Punjab in 1975, Hesham Usma Khan loves hunting and has been to almost every nook & corner of the country, especially the rugged mountain areas including the Himalayan chain. He remembers that he would go for target practice with his Grand Father Khan Tariq Ismail Khan, a Known and very Educated personality, and civil Servant. This affair with the Guns at a very early age got over him completely and as he grew older, he started to go out for hunting with his cousins, uncles and friends.

To him, “Hunting is not killing animals mindlessly, but, it is a highly sophisticated, scientific and laborious, as well as, dangerous sport.” Those who make faces over the stuffed animals and consider hunting the animals as a cruel activity must remember that humans have been killing animals since the dawn of the human civilization. The killing of animals is still going on as we “kill” Chicken, Goose, Goats, Lambs, and Cows etc. However, shooting the animals for shooting sake and going for hunting certain animals in the wilderness is another ball game altogether.

Moreover, Hesham commented, “I don’t go for the rare species of animals nor I unbalance the delicate order of the nature, because I go for Ibex, which is in abundance in our country but on very high altitudes and hazardous environments. However, I pay a lot of money in the form of licenses which not only befits the government but also helps the underdeveloped communities in our northern areas like Gilgit-Baltistan, etc.”

He revealed that the hefty sum of money which is being paid for licenses by him and other hunters 80% of it goes to the local communities, while 20% goes to the Wildlife Fund for the protection & upkeep of the animals. Can go on for hours and hours when it comes down to narrate his hunting experiences and the most favourite hunting expeditions .His body becomes stiff, his movements swift, his eyes start gleaming and words start pouring out in an uninterrupted flow. When describing how it was and how it feels while hunting way up there in the freezing zone under the shadows of the snow-capped mountain range of Himalaya, where your blood vessels start freezing due to the intense cold. He starts sharing it all with you in these word , keeping huis listener spell-bonded , speechless and absolutely flabbergasted, “It’s a different world out there, the city folks , comfortably stuck into their luxurious couches & Sofas near a fire place in winter Most of the Time it’s a “Cliff-Hanger’ kind of experience as the viewers must have experienced in the famous movie .However, the ground reality is entirely different from watching a movie in a secure environment and scaling the high -altitude mountain peaks in the most rugged, hostile and up there, at 3454.5 meters in a Freezing zone with temperature as low as -30 Celsius with the cold winds blowing all around, its simply Chilling to your bones. And, that’s where you get A Himalayan Ibex!

Hesham commented, ‘I don’t go for the rare species of animals nor I unbalance the delicate order of the nature, because I go for Ibex, which is in abundance in our country but on very high altitudes and hazardous environments. However, I pay a lot of money in the form of licenses which not only benefits the government but also helps the underdeveloped communities in our northern areas like Gilgit-Baltistan, etc’

He calls it “A Labour of Love”, and all those hardships faced by him were worth it. While describing the mesmerizing details of the final day when he finally got his reward by the grace of Allah on 1st January 2016 on the top of the mountain where he shot down the biggest The beaming Hesham Usama Khan got so excited that he stood up from his seat The twilling of days, the 24 hours long vigilance and lookout in the vast wilderness for a glimpse of that much sought after Himalayan Ibex, many sleepless nights in small tents at the foot of the Batura Glacier and the unforgettable final night at an altitude of over 3000 meters, spent in a shoebox like, it all paid off on the morning of the New Year’s First morning .And, it was all over in just 3 seconds, a single shot from the Sieyr Mannlicher 7mm Rem Management Riffle, from a distance of over a kilometre. And, the World Record Himalayan Ibex-Ranked No.1 was down on the cold stone floor of those snowcapped Rocky Mountains in just three seconds, while his fellow animals running for a cover right past him. 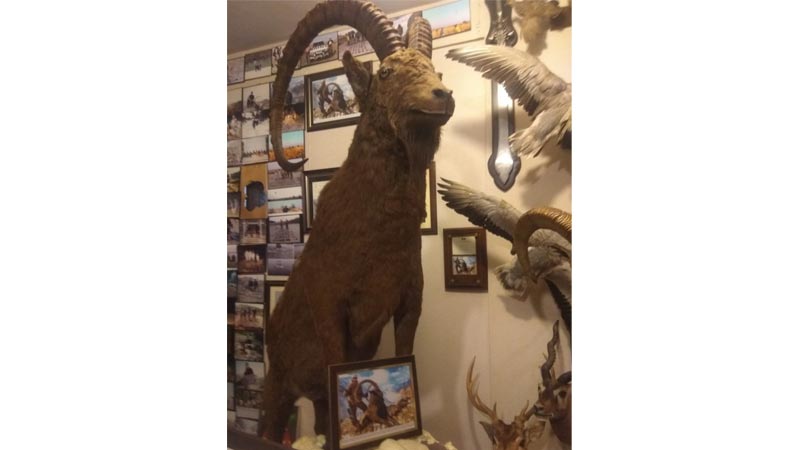 The meristic, unbreakable and unchallengeable World Record Himalayan Ibex. Trophy with horn measuring 53 inches having the privileged of the biggest horn size certified trophy ever hunted in the world by Hesham Usama Khan from Lahore (Pakistan) on 1st January 2016. The world class trophy was harvested in Passu, Hunza (Younz valley) near Batura Glacier at 3454.5meters altitude out fitted by Muhammad Shifa (Silk Route Expeditions).

This Trophy was appreciated on local, as well as International Forums, to name a few prominent worldwide awards are Safari Club International Gold Award, Rowland Ward’s Record of Big Games, Carlo Caldesi Award (Italian Chapter for all animal species worldwide) and Shikar Safari (for all animal species in Asia).Pakistan’s leading newspapers, hunting magazines and websites worldwide also published the news and appreciated Hesham Usma Khan to make Pakistan Proud. This great achievement spread a wave of celebration in the region which also highlighted the local communities ‘effort of animal conservation and the growth of sustainable development for local communities.

Before this greatest achievement so far till this day by Hesham Usma Khan, there are a lot of claims that the Himalayan Ibex 53 inches horn size world record has been broken, but no authenticated registration or certification was ever brought up as an evidence from any forum or recognised world’s organisation. Claims were made to get the spotlight but faded as they were bogus and couldn’t be certified by any local or International Organization.

Hesham is very humble and would boast about his unmatched achievements as a hunter. He is a strong believer and keeps reciting Sura’s and Darood even when he on the top of the hills in the freezing cold or just about to shoot down a target. He says” It’s my believe that Almighty has been kind to me that it has been 4 years and the world record , which I am holding , is still unbroken despite many Claims and rumours.

According to Hesham, “A good marksman can hunt from miles away. The Stamina of a hunter can help him to stalk and reach an animal for a close kill”. He further explained that “A good weapon and gadgets add value in hunting, but, a world record animal has to be there, otherwise it will not be a Record at all. If a World Record also there then it’s a sheering blessing of Allah, because it happens once in a blue moon”.