A Case of Exploding Mangoes is a comical farce 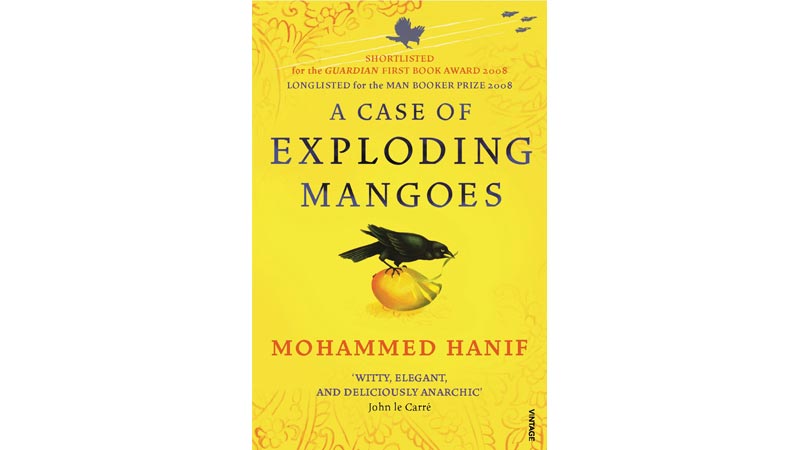 A Case of Exploding Mangoes by writer and journalist Mohammed Hanif is a comical account of the plane crash that killed president Ziaul Haq.

Muhammad Hanif was born in Okara, Pakistan. He graduated from Pakistan Air Force Academy as a Pilot officer but subsequently left to pursue a career in journalism. He is a graduate of the University of East Anglia’s creative writing programme. Currently he heads the BBC Urdu service and lives in London.

Mohammed Hanif is a humble and witty man who writes slapstick humour and potent satire. His novel A Case of Exploding Mangoes has now been translated into Urdu. The novel is being turned into a film. Irfan Khan is going to star in the movie based on the novel. Yes, you heard it right! The news is big! The movie will be directed by Hammad Khan.

The Guardian defined the novel as “woven in a language as explosive as the mangoes themselves, is wickedly cynical and reveals layers of outrageous and plausible corruption”.

The Washington Post concludes by saying “Hanif has his own story to tell, one that defies expectation at every turn.”

The narrator is Ali Shigri. Colonel Quli Shigri his father recently died. And it is concluded, he was killed by an ISI officer, Major Kiyani under Zia’s orders.

It is here that an underlying concern of the novel is highlighted as Ali says and I quote:

“The guilty commit the crime, the innocent are punished. That’s the world we live in.”

Whether Colonel Shigri was innocent or not is a question that comes into the readers mind. The suspense is built and the answer can only be found upon reading the novel!

As Zia jokes with the Saudi Prince and I quote:

“And if wishes were Aladdin’s carpet sinners like me would always be flying to Mecca.” The dialogue actually points to a sarcastic truth. The General who consults the Holy Book before taking any decision is the very man who goes against the moral conduct of life written in the Book killing the innocent, drinking booze and messing with women!

Interspersed between pieces of Ali’s narratives are glimpses into the lives of other key Pakistani and American political players. Arnold Raphel was the US Ambassador to Pakistan and his wife was Nancy. General Akhtar was the Chief of Pakistan’s Intelligence & General Zia himself.

Ali wanted revenge and vengeance for his father’s cold blooded murder. He wants to kill Zia. But his plan backfires as Obaid referred to as Baby O decides to crash the plane which Zia boards, accidentally landing Ali in a prison cell at Lahore Fort!

As Ali hears the screams of the prisoners and comes into contact with the Secretary General who’s been in solitary confinement, he discovers his own father to be responsible for creating the torture cell.

As Zia controls the media on what to print and what to not, he fails in one incidence where the news of him in being close physical contact with a famous foreign correspondent Joanne Herring is printed.

The picture destroys the faith of the First Lady in all men. How Zia criticized her all the time and I quote:

“If she wore make-up he accused her of aping high society westernized women. If she wore no make-up he said she looked like death, very unlike a first lady. He constantly lectured her that as the First Lady of an Islamic state she should be a role model for other women.”

“The Man of Truth, the Man of Faith, the man who lectured women on piety, the man who fired judges ad television news-castor who refused to take the dupatta on their heads…the man who made cinema owners blot out any bare legs or arms of actresses from the film posters, the same man was staring at those globes of white flesh with such single mindedness that it seemed as if his own mind had been born without a pair.”

The Guardian defined the novel as ‘woven in a language as explosive as the mangoes themselves, is wickedly cynical and reveals layers of outrageous and plausible corruption’

The above passages provide an insight into the paradoxical nature of the General. What he appears on the outside is not what he like on the inside. The 2 opposing forces in his nature conflict with one another ultimately leading to his doom!

As the General send a blind woman Zainab to death by stoning for being victim of a gang rape. According to sharia law she had committed adultery. For condemning her, Zainab calls down a curse upon Zia. The curse is picked by a sugar-obsessed crow.

As she sits in her cell feeding bread crumbs to the sparrows and crows alike. The crow hears the curse from someone who has fed him to his fill and then carries the curse to the one who has been cursed. Crows are gluttonous and wayward as their movements can never be predicted. As Zainab waits for her own journey to begin like the crow, she let the current carry her. Crows may not have a conscience but their memory lasts for 90 years.

Another truth that the novel points to is and I quote:

“There is no difference between a sweeper and a soldier. These are both forms of exploitative labour that the military industrial complex thrive on.” How the powerful exploit those lower in the hierarchy for their own gains is the reality and fact that the novel is portraying.

As the General tries to invert his fate and follows the advice his friend Ceausescu’s gives him and I quote:

“Believe only 10 percent of what your intelligence agencies tell you about public opinion. The key is that they should either love you or fear you: your decline starts the day they become indifferent to you.”

As the General takes the advice to his heart implementing it, the different conspiracy theories that come to his mind as he roams the streets disguised as a commoner are startling. He understood the meaning of true democracy!

“What is democracy? What is its essence? You draw strength from your people and you become even stronger ad that is exactly what Zia was doing at this moment.”

As he hears the opinion of the masses and I quote:

“Isn’t one Zia enough for this poor nation? Do we need crazies like you running around in the middle of the night pretending to be him.”

And so, the novel returns to the metaphor of the mangoes and the crows. The symbolism is apparent. The fate of the crow is the fate of the General. After several narrow escapes like the crow the General too finally succumbs to what fate has in store for him. After all nobody can be lucky so many times!

The mangoes point to the greed! They are a metaphor for the undying greed for power, for more and more. And so when the limit is crossed and power is infinite so it paves the way for the fall from the heights of happiness to the depths of misery!

As the crow after eating the mangoes can barely move its wings so his luck dies as well. The crow wonders why it left the sanctuary of the mango orchard. The encounter with the plane will be his “last stroke of luck.” “The crow hurtles through the engine, spins with the intake cycle and is sucked into a side duct; his tiny shriek is drowned out by the roar of the engine.”

And so here it ends, the era of the General, of Zia! Whether it was fair or unfair is a matter of personal opinion. Read the book and find out for yourself! Form your own opinion and your own verdict.