Stigmatization and unemployment among educated youth

I often have discussions with my wife about the possible solutions to my unemployment and the situation it has created for us. I have finally arrived at two solutions; either I should buy a pistol and start robbing people in the streets or I should shoot us both to end our misery.

My degree has become a social stigma for me. I live in a joint family system. I started facing stigmatization firstly by my family members and then the outside community. I face questions like, when will I get a job, why am I unemployed for so long, or is there any use of my education and degree.

Uneducated people like rikshaw and tonga drivers have started to ask me “Don’t you think I am better than you” and “why do you wander here and there all day long and do nothing?” and they are not wrong because they are at least earning a living for their family. I got asked these questions on a daily basis and now I have had enough of it. I have tried to isolate myself from society but that did not work. My parents also questioned me, and I started to feel like a burden on them.

This was a small part of Ahmed’s story who was sharing his unemployment experiences with me as I was working on a research paper on educated youth unemployment experiences. Ahmed has completed his electrical engineering degree from UET Peshawar in 2014 and since then he is in search of a job. This is not something Ahmed alone is facing. It has now become the story of most of the degree holders who are unemployed these days.

A country, whose major GDP source is from the agriculture sector and which has more than 60% population in its rural areas, has seen a major shift from farming towards education in the younger population. Youngsters who used to work in farming and were involved in small business and works are now degree holders. 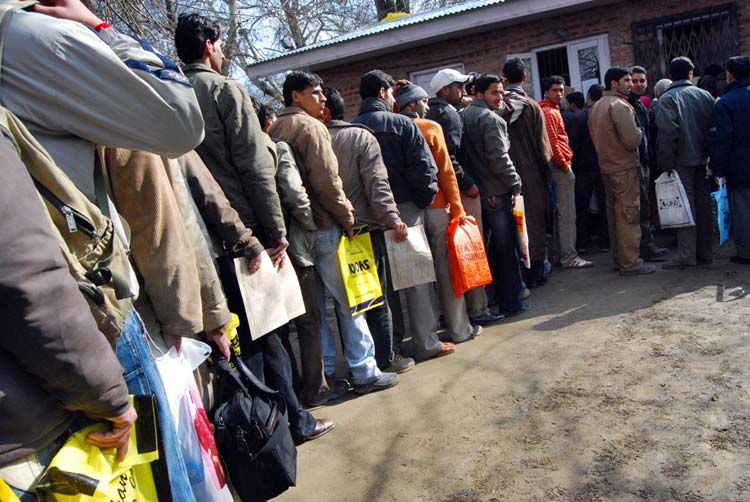 Every degree holder is in search of a job, and that too, for a government job. The sense of security attached to government jobs has resulted in a comparatively negative perception of private-sector jobs. However, the government sector cannot accommodate that huge bulk of the youth with higher degrees. This has resulted in a very disturbing situation for the younger population of this country. These unemployed individuals are questioned about their employment status on a routine basis by the people in their surroundings starting from their family, friends, relatives, and people in their neighborhood. They face negative comments from the people, they are even called by derogatory names such as loafer, berozgaar, etc. They are blamed for their unemployed as if it’s their fault.

Another major social consequence of the unemployment among degree holders is that of late marriages among them. In the recent past, the appropriate age for marriage was between 20 and 25 years. However, it is now expected from the educated youth to first get a job and then get a mate. This criterion is not yet applied to the uneducated and unemployed youth. An interesting scenario that I discovered in my research is that among two brothers, if one is educated and older in age and the other one is uneducated and younger in age, the parents usually decide to have the younger unemployed son married as he does not need to wait for a government job and the older one should wait until he gets a job.

Similarly, the impact of unemployment is seen stronger in rural areas where individuals interact with each other on a regular basis and everyone knows each other personally. An individual matter then becomes a matter of the whole community, thus contributing to a stronger impact on unemployed individuals.

The cost of negative responses from the family, friends, and community is resulting in anxiety, depression, and isolation and in some cases in suicide among the degree holders unemployed youth. In recent times we have seen that youngsters have committed suicides just because they were not getting a job and were under severe pressure from family and surrounding people. The degree itself is becoming a source of social stigma for the youth and the situation is expected to become worse in the near future as more and more youngsters are going for higher degrees and keeping in view the large cohort of the population of younger age.

I will not ask for any government intervention or policy measures about the unemployment situation as everyone knows very well what measures on government part are needed to be taken. My suggestion or rather request is to the parents, friends, relatives and the people who have an interaction with unemployed individuals in their surroundings. First, they should stop blaming youngsters for their unemployment and instead of becoming a reason for their depression and anxiety, they should provide them with mental and emotional support in crucial times of their unemployment.

Especially parents need to talk to their children even if they are married or grown enough but are unemployed, about what they are going through rather than stigmatizing them. Then, the overall society needs to understand that getting a degree does not mean that a person would get a government job and if they are not getting one, they do not necessarily become a burden on their family or society.

Please stop naming, blaming and shaming the educated unemployed youth. It might be very normal for you to blame someone for his joblessness on daily basis, calling him by derogatory names and inquiring about his employment status you cannot understand how badly it is affecting them and resulting in their isolation from society and towards stagnation and despair. Please if you cannot do something about their problems, at least stop stigmatizing them!!!

The writer is a Ph.D. Scholar at the department of Sociology Quaid-i-Azam University Islamabad.