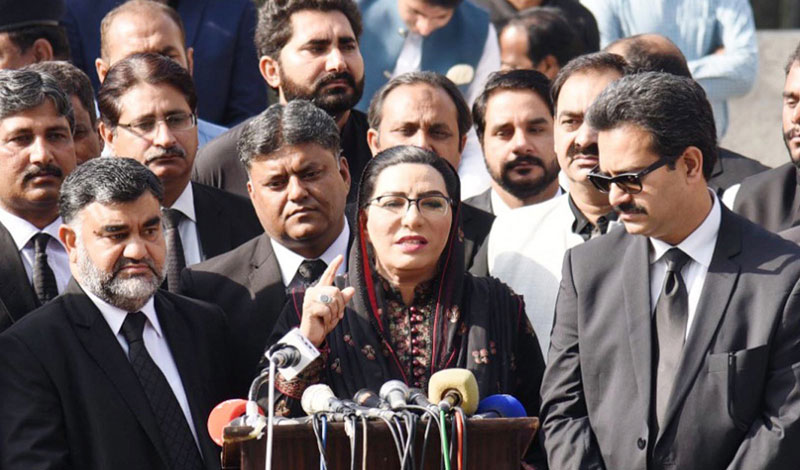 The Islamabad High Court (IHC) on Tuesday told Special Assistant to the Prime Minister on Information Firdous Ashiq Awan to submit a written apology to the court by Saturday.

The directives were issued by IHC Chief Justice Athar Minallah during the hearing of the contempt of court case against the special assistant. The IHC chief justice asked for a written reply after Firdous issued an unconditional apology to the court during the hearing.

Justice Minallah directed the special assistant’s lawyer to submit the written reply by Saturday and set November 11 as the date for the next hearing.

Firdous, through her lawyer, had requested the court for an exemption from her personal appearance during the hearing.

However, Justice Minallah rejected the request and added that her presence in the court is beneficial for her.

IHC CJ Athar Minallah also asked the special assistant whether she had visited the district court.

While talking about her visits to the district courts, Firdous said, “The conditions under which the lawyers are working and helping the petitioners is commendable.”

Justice Minallah also informed the special assistant that there was a terrorist incident in district court in the federal capital’s F-8 area.

Firdous was directed to visit the district courts, along with the bar representatives, in the last hearing on the instructions of the chief justice.

The IHC chief justice also told the special assistant that he held the hearings of those arrested during the PTI sit-in on Sunday on the request of senior bar representative Niazullah Niazi.

Justice Minallah remarked, “During the sit -in this court stopped [the government] from arrests.” To this, Firdous informed the court that she had joined the PTI after the sit-in.

To this, Firdous gave an unconditional apology to the court. She added that in her 20-year career she has never spoken about the courts. But the court asked for a written apology.

The IHC CJ also remarked that ministers said that a deal was struck to pressurise the courts.

The IHC on Friday had issued another show cause notice to Firdous in the contempt of court case against her.

She had first been issued a contempt notice for criticising the judiciary in her press conference last Wednesday. During Friday’s hearing, the court had accepted her apology but issued her a fresh contempt of court notice for making a statement regarding a pending criminal proceeding.