Army will continue to back national institutions: COAS 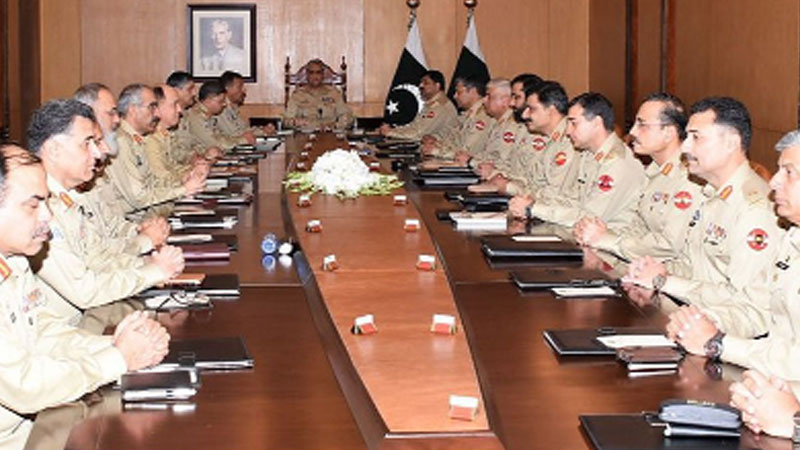 Chief of Army Staff General Qamar Javed Bajwa Monday reiterated that Pakistan Army will continue to support national institutions as and when asked as per constitution.

“Pakistan Army, as an organ of the state, will continue to support national institutions as and when asked as per constitution,” Gen Bajwa told a Corps Commanders’ Conference held here at the General Headquarters. “We have attained better internal security and stability through cohesive national efforts and sacrifices rendered by Pakistan Armed Forces and all national institutions and above all the nation,” he said. “We shall not let it reverse to suit any vested agenda at any cost,” he asserted, according to a statement issued by the Inter-Services Public Relations (ISPR) after the meeting.

“While Pakistan Armed Forces, with support of national institutions and the nation, are fully prepared and committed to thwart all threats including on Eastern Border/LOC, continued cohesion of all national stakeholders on key national issues is essential to defeat inimical forces,” the army chief underlined.

The military’s assurance of support to the state institutions comes at a time when JUI-F chief Maulana Fazlur Rehman, along with other opposition parties, is encamped in the federal capital demanding resignation of Prime Minister Imran Khan.

The cleric, while addressing his supporters on Friday, had called upon the ‘state institutions’ to stay impartial and stop supporting the Imran Khan-led government.

Reacting to the Maulana’s statement, ISPR Director General Major General Asif Ghafoor had said the Pakistani military was an impartial state institution, which always supported democratically elected governments in accordance with the constitution. He had also warned that nobody would be allowed to create chaos and instability in the country.