In Vietnam’s ‘Billionaire Village’, migrant cash can buy a palace 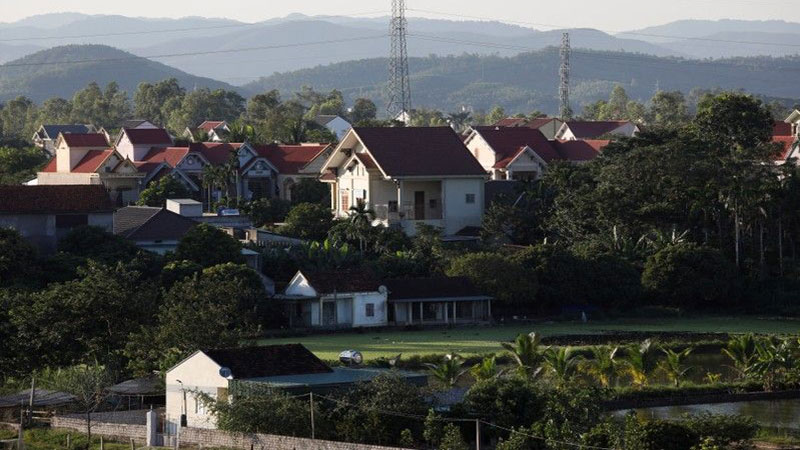 Vietnam’s “Billionaire Village” doesn’t sound like a place people would want to leave, but at least three of the 39 victims found in the back of a lorry in Britain last week set off from there in search of their fortunes.

A billion dong may only be around $43,000, but in the rural, northern-central Vietnamese town of Do Thanh, the money goes a long way, and even farmers live in palatial mansions, paid for with money sent back by family members working abroad.

“70-80% of the villas here have been built with remittances,” said Nguyen Van Ha, chairman of the rural, rice-farming commune in Nghe An province.

“If you work in Vietnam earning dong, it would take a long time to build a big house like this,” Ha said, gesturing to the large, multi-storey villas flanking the town hall.

In Do Thanh, even the majestic, renaissance-style church towering over the plush, neighbouring villas was built with remittance money donated by the Catholic community.

Many other victims are believed to come from outside the town, in the surrounding district of Yen Thanh. In the 1980s, Do Thanh used to be one of the district’s poorest villages, according to state media. One resident, 19-year-old Bui Thi Nhung, is thought by her family to be among the dead. She left a trail of messages on her social media account documenting her journey through Europe in the days before she boarded the fated vehicle.

Deputy Foreign Minister Nguyen Quoc Cuong told Reuters on Tuesday the nationality of the victims had not been officially confirmed but that Vietnam and Britain were “trying to speed up identification of the bodies”.

The grisly discovery last week on an industrial estate near London, a magnet for Vietnamese migrants, has shone a spotlight on people smugglers bringing the poor of Asia, Africa and the Middle East on perilous journeys to the West.

But even though the cost of getting to Europe can run into thousands of dollars for migrants ready to pay for a so-called “VIP” service, they believe they can make enough money to justify the risk.

“We know that many residents of this district are living in Britain, but we have no idea what they do there to earn all this money to send back home,” Ha said.

Overseas workers sent nearly $16 billion in remittances to Vietnam in 2018, more than double the Southeast Asian country’s trade surplus for the same period, according to World Bank data that showed remittances had risen 130% over the last decade.

In Nghe An and neighbouring Ha Tinh province, official policy supports the legal export of labour.

Nghe An province alone rakes in some $255 million annually from its overseas citizens, according to state media.

“The remittance figures might be higher than reported as money transferred through unofficial ways, such as cash or as physical consumer goods, is not counted,” said Nguyen Tri Hieu, a Hanoi-based economist and former government adviser.

Many of the same networks which smuggle people also smuggle cash, in return for commission.

About 70 percent of Vietnamese trafficking cases in Britain between 2009 and 2016 were related to labour exploitation, with migrants lured into jobs growing cannabis illegally and working in nail salons, Britain said last year.

But many find legal work too, including in Europe, the United States and closer to home in Japan, Taiwan and neighbouring Laos.

In Nghe An, which borders Laos, GDP per capita stands at $1,636, well below Vietnam’s national average of $2,540. “I didn’t have enough money to go abroad so I went to Saigon instead,” said Bui Van Diep, a welder, using the old name for Ho Chi Minh City.

He lives in a small shack in Do Thanh. His cousin, Bui Chung lives in a large, gleaming villa next door – with enough space leftover to park his jet black BMW. Bui Chung left Do Thanh for Britain in 2007, and when he returned home he built his house and started a steel trading business.

“I went from Vietnam to France legally, but from France to the UK illegally inside a container truck,” said Chung. “I chose to go to the UK because the salary is very good and so many people from Do Thanh had already lived there.” Chung worked in a cannabis farm in Britain, and at a Vietnamese-run nail salon where he said he earned around 500 pounds ($640) a week.

“The Vietnamese community living there help newcomers to find jobs,” Chung said. “That’s why many people around here are willing to even sell their land to raise enough money to go.” Now, he believes he made a huge mistake returning home. “I’ve lost a lot of money doing business here. People don’t trust each other,” he said. “I might go back to the UK”.