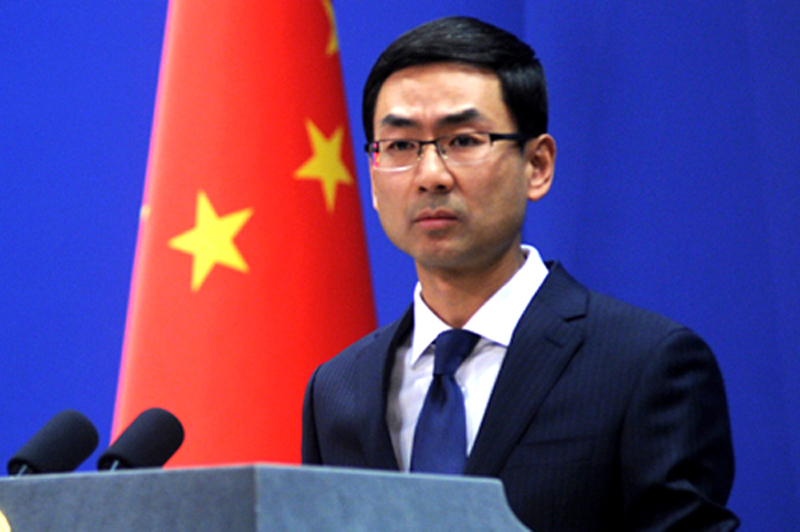 ISLAMABAD: China on Thursday deplored and firmly opposed India’s formation of Jammu and Kashmir and Ladakh union territories as illegal, invalid and ineffective and said this move would not change the fact.

“India unilaterally changed its domestic laws and administrative divisions challenging China’s sovereignty. This is unlawful and void and this is not effective in any way and will not change the fact that the area is under Chinese actual control.” Chinese Foreign Ministry’s Spokesperson Geng Shuang said during his regular briefing held here.

He said that the Indian government officially announced the establishment of
so-called Jammu and Kashmir and Ladakh union territories which included some of China’s territory into its administrative jurisdiction. “China deplores and firmly opposes that.”

The spokesperson urged the Indian side to earnestly respect the Chinese territorial sovereignty, abide by bilateral treaties and uphold peace and tranquility in the border areas and create favourable conditions for the proper settlement of boundary questions.

On his government’s stance on Kashmir, he said, “China’s position on the Kashmir issue is consistent and clear. This is a dispute left from history and it should be properly and peacefully resolved based on the United Nations charter, the relevant UNSC resolutions and other bilateral treaties.

He said the relevant side should resolve the dispute through dialogue and consultations and uphold regional peace and stability.

To a question that the Chinese side was opposed to blacklist Pakistan by FATF, he said that the FATF was an important platform for anti-money laundering and fighting terrorist financing activities.

Geng Shuang said that the aim of FATF is to better help all countries fight the illegal activities of money laundering and terrorist financing or the abuse of international financial system, adding “It’s aim is not to sanction or punish any country.”
China, he said, supported Pakistan improving its domestic anti-terrorist financing system, adding, “We will work with all parties of FATF to provide constructive support and assistance to Pakistan.”

While commenting on President Xi Jinping’s recent visit to India, he said that regarding President Xi and Indian Prime Minister Modi’s meeting in Chennai, the two sides had released statements and press releases.

Both the sides exchanged views on the global, regional, long term and strategy issues in a friendly atmosphere and agreed to develop closer partnerships. They also discussed cooperation in various areas in the next stage, he said and added, “I believe this includes cooperation in people-to-people exchanges.”

He said that cooperation between China and India grew fast in the past years. And both countries had a mechanism for people-to-people exchange.