Dengue, a widespread mosquito-borne infection in human beings, first appeared in Pakistan in 1994, and hit Karachi in 2005 when 500 cases were reported along with 13 deaths. Later, it reached the other parts of the country, including Lahore and Rawalpindi. The biggest number of cases reported was 22,500 along with more than 350 deaths. The then governments though tried to get control over it, this year it has broken the past record. 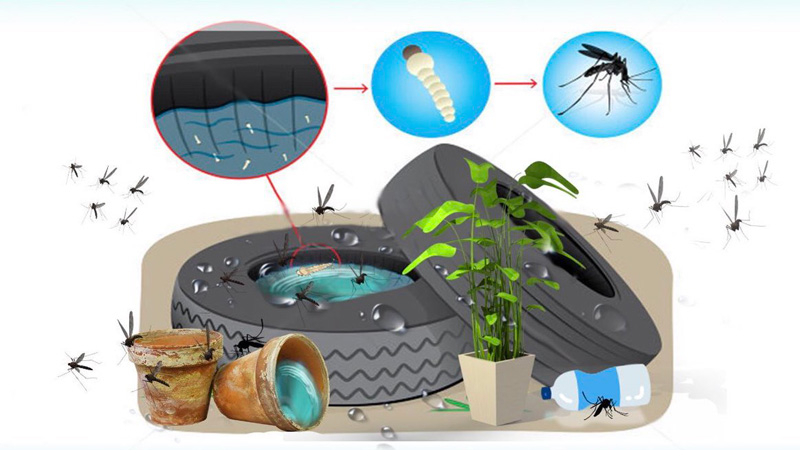 According to official estimates, over 26,000 people have been affected due to dengue, including 400 deaths during this summer.

For prevention and control, our governments have been using different insecticides since dengue’s breakout. In the beginning, DDT, a synthetic insecticide that was introduced by the US in 1874 and banned in 1972, was used to control the spread of dengue in Pakistan. Other insecticides that were used and are in the use this year include: Pyrethriods, Deltamethrin, Alpha Cypermethrin and Lambda-cyhalothrin. These insecticides have a very hazardous impact not only on human health but also on environment.

Initially, the use of DDT was limited to one dose, but when mosquitoes formed resistance against DDT, the dose was doubled. Such an excessive use of DDT caused serious problems in the nervous system, liver and kidneys, besides birth defects, cancer and injury to reproductive organs. Similarly, environmental impacts include depletion of ozone layer, insect resistance and degradation of air quality. After these symptoms appeared, the government has banned this insecticide and has introduced a new one, namely Deltamethrin.

Deltamethrin is also applied on the same pattern. It badly contaminates the air and enters the body through inhalation. After inhaling a significant amount of Deltamethrin, people can suffer from headache, nausea, vomiting, abdominal pain, skin allergy and asthma. On the other hand, it is highly toxic to aquatic life because of its insolubility in water. Its concentration in water decreases the level of oxygen in water.

After the mosquitoes formed resistance against deltamethrin, the government started using Alpha-cypermethrin and Lambda-cyhalothrin. According to the World Health Organisation, Alpha-cypermethrin is also highly toxic to aquatic organisms and animals. High dose of this insecticide can cause severe irritation in eyes, sensory nerves ending in the skin of pigs and irritation in rabbits’ skin. Similarly, the use of Lambda-cyhalothrin also causes diseases like nausea, cough, sneezing, vomiting, abdominal pain and headache.

The use of insecticide is not a solution to kill dengue vector. There is a need to opt for environment-friendly methods to control this epidemic. In future, we should adopt basic hygiene principles, biological control and insect growth regulator to get rid of dengue and other such vector borne diseases.

The use of insecticide is not a solution to kill dengue vector. There is a need to opt for environment-friendly methods to control this epidemic

Preventive measure is the first basis and an important method to control all vector borne illnesses. Exclusions and restrictions are the first choice of defence against vectors. Physical, virtual or procedural barrier and practices that deny what the mosquitoes are looking for. Preventive measures mainly include sanitation of the surroundings, storage practices, waste management, and lastly, the effective barriers in our houses. We must adopt the basic Integrated Pest Management to control the mosquito population to a threshold level. All these measures can keep us safe from all vector borne outbreaks.

Second best option to control mosquito spread is biological control. Larvae and pupa of dengue vector (Aedesaegypti & Aedesalbopictus) can be killed before they become an adult. As the larvae of dengue vector reside in open water bodies and in large water containers, we can place Larvivorous fish in habitats of larvae. Larvivorous fish will eat larvae and effectively prevent mosquito development. This method is very effective in small water impoundments, rice paddies and wells.

Among Larvivorous, Gambusia is the most commonly used fish in the world. It is also known as the mosquito fish. It was introduced in the1990s when Egypt, Iran and Sudan imported it from Italy and the USSR. In the 1990s, the Larvivorous fish was used by Afghanistan, Cyprus, Djibouti, Egypt, Yemen, Iran and Iraq in wells, streams, pools, lakes as well as in rice fields.

Insect growth regulator is a chemical compound that kills the mosquito or any other insect on initial stages of growth. They basically disrupt growth and reproduction of insects. The most commonly used insect regulators are diflubenzuron, methoprene and endotoxins. Insect growth regulators preserve in water for shorter period of time. Slow release formulation is a more effective solution to this problem.

Another promising technique to control dengue transmission is Wolbachiapipients. In this method, mosquitoes are infected with bacteria, which shorten their life span. A question arises as to how a shorter life period can help control dengue transmission. The answer is a mosquito can infect a healthy person within eight to twelve days of its lifespan when it was infected with dengue virus. Generally, it takes two to three weeks to infect a person in its lifespan. So if its life is made shorter, it has less chance to transmit dengue. That’s why scientists are now trying to reduce mosquitoes’ lifespan instead of its eradication.

As dengue spread is becoming worse in the country, it is the core responsibility of the government to launch awareness campaigns at community level and make special arrangements at district and tehsil headquarter hospitals for the cure of dengue. Government should also take steps related to environmental modification and manipulation. Water should be managed through filling of stagnant pools, ditches, removal of water bodies and artificial containers like tin, cans, bottles and tyres.

The writer works at the Sustainable Development Policy Institute