No compromise on respect of vote: Fazl 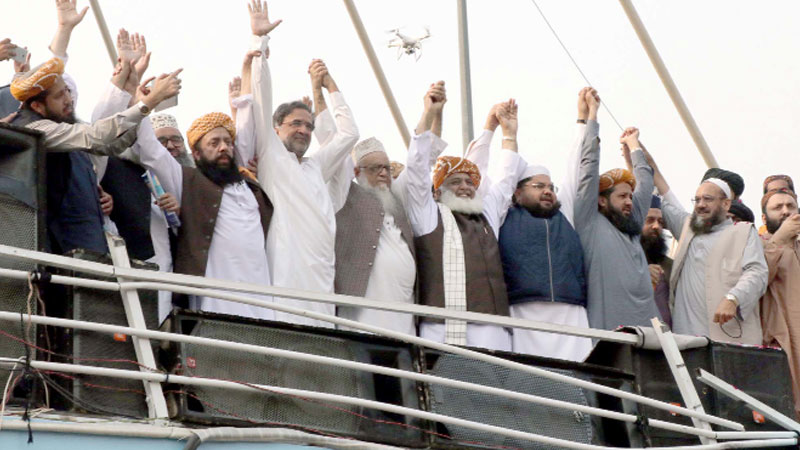 Jamiat Ulema-e-Islam-Fazl (JUI-F) chief Wednesday asserted that people’s vote will have to be respected as no compromise can be made on the matter.

“The people’s vote will now be respected … there will be no compromise on the matter,” he said while addressing the participants of the march in Kamoke on way to Islamabad. “The entire nation is now on the same page regarding the current government. They will have to hand over power back to the people,” he said. “They have destroyed the economy. When such devastation occurs, the country’s geography is forever changed,” he went on to say. “We wish to see a stable economy. Our economic ship is sinking. We must fight for the nation’s security,” he added.

Earlier, addressing thousands of participants of Azadi March at Minar-e-Pakistan, the JUI-F chief once again termed the current government of Pakistan Tehreek-e-Insaf (PTI) ‘illegitimate’ and ‘incompetent’. “We have very clear opinion from the day one that this government was formed through a rigged election in which the mandate of people was stolen and we want to get back the people’s mandate,” he said. “The drama with politicians in the name of accountability must stop now,” he added.

The JUI-F chief said the whole nation should get united to fight a war for the sovereignty of the country. “Respected teachers of this country are on the roads while traders are observing strike throughout Pakistan,” he said, adding that the government has failed to provide employment to the youth. “This Azadi March is the voice of every oppressed citizen and it has become a national movement now,” he said.

Fazl said he will put demands before the government after reaching Islamabad. “This movement will become more aggressive if the rulers didn’t consider the voice of the nation. We never used the word of sit-in as it is a movement that will continue,” he said.

The JUI-F chief said the JUI-F has carried out 15 million marches so far and the party’s workers have rightly proved that they are peaceful citizens of Pakistan. He also praised the services of Nawaz Sharif for Pakistan and democracy and also prayed for his speedy recovery.

Although, the number of workers from other political parties, including PML-N and PPP, were not impressive in Lahore gatherings, the JUI-F chief paid his gratitude for both of them for welcoming the participants of the march.

Earlier, the caravan of JUI-F received a huge welcome at Thokar Niaz Beg after reaching Lahore the late night. The participants spent the whole night at Minar-e-Pakistan while Fazl went to the residence of a local JUI-F leader before coming back in the morning. Senator Sajid Mir of Markazi Jamiat Ahle Hadith, Qamar Zaman Kaira of PPP and local leadership of PML-N was also present on the occasion.

The march had the representation of people from across the country as participants had reached Lahore from Quetta, Karachi, Kashmore, Multan, DG Khan and RY Khan. Although other political parties have pledged to participate in the march, but the participation of both PML-N and PPP was not impressive. The Azadi March left for Islamabad via GT Road. The participants will spend night in Gujar Khan before leaving for the federal capital Thursday morning. The local leadership of PML-N and PPP has established welcome camps along the route of the march.

The JUI-F has banned its women party members from participating in the Azadi March. Senator Maulana Abdul Ghafoor Haideri said other parties may call in their female members if they wish. “There is no restriction on them.”

He said woman journalists wishing to cover the march are allowed to do so. He denied knowledge of a female reporter in Karachi being prevented from reporting the event.

Meanwhile, the federal government has finalised its preparations to handle the Azadi March as it summoned Pakistan Army troops for protection of sensitive areas, while Islamabad Police and Pakistan Rangers will act as first and second line of defence.

The decision was taken at a high-level meeting held at the Ministry of Interior. Representatives from Pakistan Army, Pakistan Rangers, police and civil administration attended the meeting. The meeting discussed plans A, B, C and D to deal with any untoward situation. It was decided that no protester will be allowed to enter the Red Zone and several layers of security will be deployed to ensure it. Islamabad Inspector General of Police (IGP) and Pakistan Rangers director general gave separate briefings over their strategy to deal with those who violate security cordons. A detailed briefing was also given on police and reserve police provision.

Aerial monitoring of the route of the rally and the space allocated for the public gathering will be conducted. The meeting resolved that the administration would cooperate with those abiding by the agreement while the violators will be taken to task effectively.

Meanwhile, all private schools in the federal capital will remain closed on Thursday. The Private Schools Association (PSA) president stated that the decision to reopen schools will be taken in light of the developing situation.