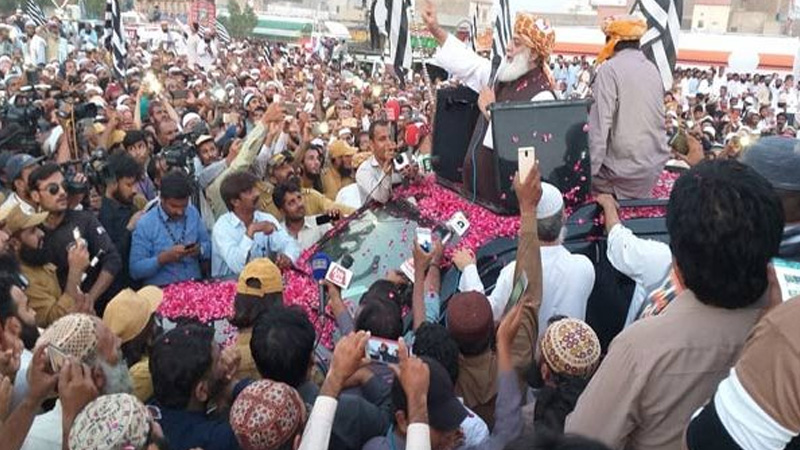 The Punjab chapter of PPP has decided to give warm welcome to the Azadi March being led by JUI-F chief Maulana Fazlur Rehman as a large number of crowd is heading towards Punjab.

The Jiyalas and workers of PPP will receive the participants of the march once it enters in the Punjab as the party has given directions to the workers in this regard. PPP Central Punjab General Secretary Ch Manzoor said that our workers will establish 12 camps on the routes of Azadi March once it enters in the territory of Punjab. These 12 camps will be established from Sahiwal to Islamabad-the final destination of the march.

“Our chairman Bilawal Bhutto has directed us to give warm welcome to the participants of the march that commenced from Karachi the other day,” said Ch Manzoor. He was of the view that Bilawal has instructed the Jiyalas to come on the roads in large numbers to welcome the march being led by Maulana Fazal himself. These camps will be established at GT Road Sahiwal, Okara Bypass, Pattoki Bypass, Thokar Niaz Beg Lahore, GT Road Shahdara, Ferozewala Imamia Colony, Gujranwala City, The Chenab River Gujrat, The Jhelum River, GT Road Gujjar Khan, GT Road Rawat and Faizabad Rawalpindi. All these camps will be established on the routes of the march where party banners are being reached by the local leadership.

It is pertinent to mention here that the participation of Bilawal Bhutto is not clear yet as he will decide according to the political situation once the march reaches Islamabad. However, the PPP has asked its workers to give welcome to the march. The party has also supported the march once it started from Karachi where the PPP is in the power. The Azadi March enjoyed the support of the PPP government throughout the Sindh in different areas including Karachi, Haiderabad, Sakhar, Larkana and Badin. The Azadi March will reach Lahore today as it has entered in Punjab through the border of Sindh from where it will head towards the federal capital. The Punjab government has released a huge amount of Rs 100 million to the Punjab Police to deal with the Azadi March. The police demanded the amount from the government to bear the expense of food, logistics and fuel of official vehicles deputed for the march.

Meanwhile, a meeting of PML-N’s core committee was also held in Model Town with Shehbaz Sharif in the chair to discuss the Azadi March. Senior leadership including Kh Asif, Ahsan Iqbal, Maryam Aurangzeb, Amir Muqam and others attended the meeting. Shehbaz Sharif has already said that his party will participate in the March as per the directions of Nawaz Sharif. The meeting also discussed the health condition of elder Sharif who is under treatment at Services Hospital Lahore.