The reluctant and ambiguous riddle of the UN Resolutions of Kashmir issue about the plebiscite is yet to be sorted out to see any meaningful and understandable way out. Unfortunately, these under-consideration resolutions, related to the buzzing issue, has been overlooked from the very day when tormenter India did succeed in lobbying round the world, especially with the western imperialist. No doubt, India has a strong hawkish regional vis-à-vis international role, which we have observed during some major recent developments like the cancellation of the Asian regional forum summit alongside her participation in the OIC. Furthermore, having so-called Asian Tiger’s dreams, India used to monopolise so many mega multilateral projects and the list goes on. 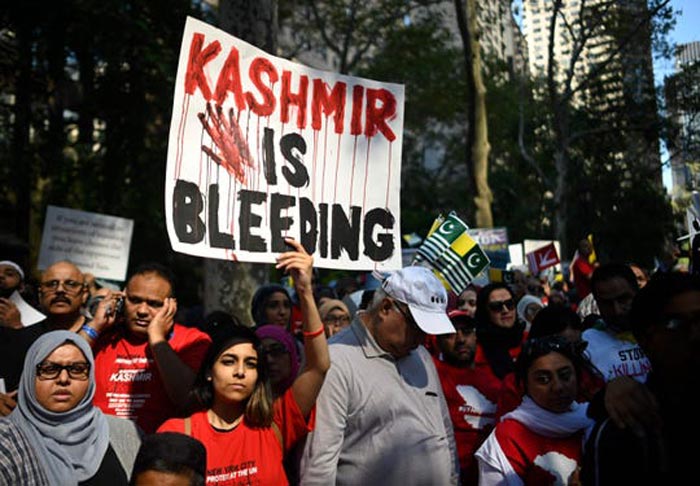 Counter to this, Pakistan should have shrewd and pro-active diplomatic ladders to develop world masses opinion for either amicable or unprecedented split second. For the sake of enabling such manoeuver, a possible strategy will be non-alignment and avoiding block politics and availing possible vested interests from the world community with no-compromise policy.

Prime Minister Imran Khan, being representative of the state, has showcased the bone of contention in a very effective diplomatic way while highlighting the real racist face of Rahsriya Sewag Sang that is involved in the ethnic cleansing of minorities especially of the Muslims of India. Modi has threatened the reflection of the so-called largest democracy by violating the norms and values have been set in the charter of international platforms. Instead of being a signatory of worldwide human right institutions, including UDHR etc., more than that a self desired UN resolution regarding self-determination of Kashmiris from the very day pretend and dealt as void.

Although the crossroad has complex and uncertain loopholes that is all due to the demanding stance of each stakeholder, which is a core stumbling block to the conflict resolution. Win-win positions between the two arch-rivals make it from difficult to the worst situation ever, that’s why a key stakeholder always had been cornered, owing to Kashmiri leader’s reluctant side by side non-tilted position on the said buzzing issue. A catch-22 situation is becoming not only an ego of each but also pushes the region and the world to the dagger-drawn. Probably, this nuclear flash-point is looking for any miracle that finally will ease the agony and suffocation of brokenhearted and upbeat people of Kashmir. Indeed, the flexibility from each stakeholder is inevitable rather the bullying roles like Prime Minister of India. Hope sustains life. Likewise, a vital awaiting conflict between two nuclear powers is keenly waiting for any saviours (Messiah) who will contain any gigantic blunder along with healing this linger soreness of oppressed Kashmiri brethren.