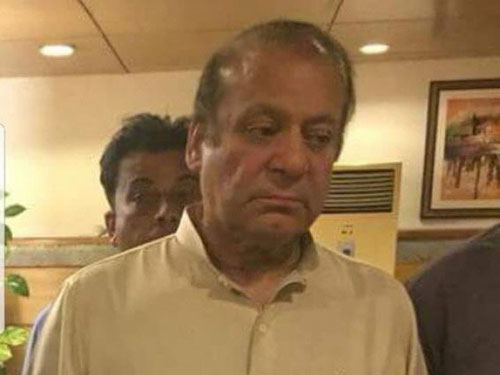 Punjab Health Minister Dr Yasmeen Rashid held a press conference in the afternoon during which she revealed that Nawaz Sharif had also experienced angina pain the night of October 24. “Cardiologists were on hand at that time and they conducted some tests. According to an enzymes test, he had experienced a minor heart attack that night,” she said, adding that owing to timely treatment, the echocardiography done the following day showed no signs of any sort of damage to the heart whatsoever. She said that his ECG reports since have been ‘comparable’.

The health minister further said that Saturday’s blood pressure and fasting blood sugar tests show that both indicators are controlled as compared to fluctuations in the past few days. She said that Nawaz’s platelets, which had experienced a drastic drop and owing to which he had been admitted to the hospital, are now at 45,000 per microliter. She said that of the platelet composition, 35 per cent are ‘young platelets which indicates that his bone marrow is functioning well’.

While speaking to reporters at the hospital, Dr Ayaz said Sharif’s platelet count is now rising. He is administered around 16 injections of intravenous immunoglobulin (IVIg) every day, the professor said.

Following the angina attack, Sharif is being given drugs for the thinning of his blood. He neither needed to be put on oxygen or ventilator nor was that done, Dr Ayaz said. “We are trying to improve Nawaz Sharif’s condition,” he added. Sharif’s daughter Maryam Nawaz is also under treatment at the same hospital. Dr Ayaz said another specialist is looking after her.