* 'Edward De Bono is a cult figure in developing tricks to sharpen the mind,' The Times quoted 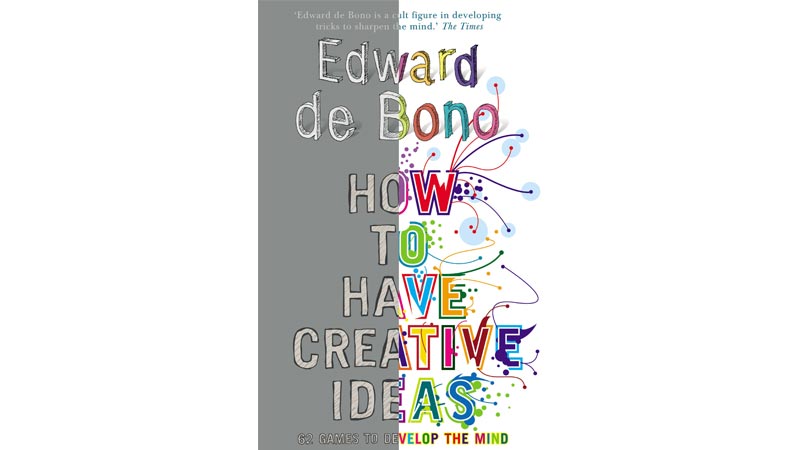 How to Have Creative Ideas by physician and psychologist Edward De Bono is a self-help book that takes the reader through 62 exercises of developing the mind.

“Edward doesn’t just think. He is a one-man global industry, whose work is gospel in government, universities, schools, corporates and even prisons all over the world.” (Times 2)

“Edward De Bono is a cult figure in developing tricks to sharpen the mind,” The Times quoted.

Singer and songwriter Peter Gabriel said, “Edward Bono is a toolmaker. His tools have been fashioned for thinking, to make more of the mind.”

“Creativity is a skill that can be learned, developed and applied.” Inhibition kills creativity and being inhibited will make one more creative.

Take the example of an ordinary man walking down the road. A group of people seize him and tie him up with a rope. A violin is produced from within him. The possible outcome is that if the rope is cut the man will play the violin. How true is that? It’s utter nonsense. Cutting the rope doesn’t make the man a violinist.

Lateral thinking is serious and systematic creativity. “It is not being different for the sake of being different.” And so, creativity is a mental skill, not just a matter of talent or inspiration.

“The brain is designed to be non-creative. It is designed to form stable patterns for dealing with a stable universe.” If the brain were creative life would be impossible! Take for example with 11 pieces of clothing to choose from every-day, there are 39,916,800 ways of getting dressed.

Creativity comes with practice. It is not a mystery. It is a logical behaviour of a certain type on information system. The human brain is a self-organizing information system. It creates patterns. And all of these patterns are asymmetric. This is the basis of humour and creativity. Reason and humour are different. Humour is the most significant behaviour of the human brain and reason works backward.

In the English language the word creates means to bring into being or existence. It is associated with bringing to life something of value. There is of course an element of ‘newness’ because repetition kills the essence of creativity!

The creativity of the art includes ‘aesthetic judgement.’ The artist judges that something is right. However, the artist rarely comes up with novel ideas.

Singer and songwriter Peter Gabriel said, ‘Edward Bono is a toolmaker. His tools have been fashioned for thinking, to make more of the mind’

An example of how creativity works is as follows:

Take the word NASA. It stands for North American Space Agency. However, coming up with different abbreviations for the same acronym such as

The new explanation is more powerful if its in sync with existing knowledge or even prejudice about the organization.

What is the significance of possibility?

Take the case of China. 2000 years ago, China was far ahead than the West in term of science and technology. However, China eliminated the concept of possibility and hence its progress came to a halt.

The same thing is happening today in the world. With the advancement in IT, people are beginning to think that all they need is to collect data and analyse it. There is a huge need to interpret the data in a creative manner for progress to take place. Whilst the human brain always moves towards certainty and is afraid to take risks. The risk taking is important to enable creativity to flourish!

So, how to use this book is to go through the games and exercises systematically and in a disciplined way.

“There is no magic fountain you need to drink from in order to become creative.”

Take the case of a crossword or Sudoku. You get a sense of achievement when you succeed. And when you compare your results with that of others it encourages you to do better each time. It helps you ‘train your mind.’

“Use the given problems and situations even if you find them difficult.”

With creativity there is no one right answer! The emphasis is on the creativity of ‘what can be’ rather than on the educational emphasis of ‘what is?’

Just as with the physical fitness where one has to be regular, consistent and disciplined, the same holds for creativity.

All the exercises are based around the Random Word. A random word is there for no reason at all. The words are all nouns because they are easier to use. Its basic purpose is stimulation. It stimulates the brain by bringing forth new as well as cliched ideas associated with the word. It is a provocation.

All of the 62 exercises are based around the concept of the Random Word.

It is not like a puzzle for which you find the answer. You don’t have to find out how the story ends? The book is like a gym for creative thinking habits and skills.

Get your hands on the book and practice the exercises to master the art of creativity!