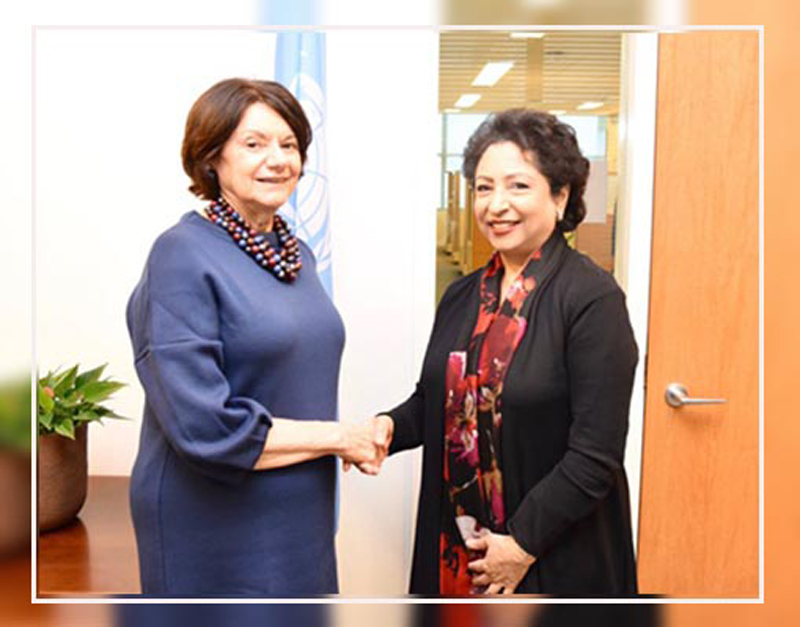 UNITED NATIONS: A senior Pakistani diplomat has told a top UN official that India’s “false and malevolent” claims of having destroyed three alleged camps across the Line of Control (LoC) in the disputed Kashmir region were given the lie when Pakistan took Islamabad-based foreign diplomats to the LoC on Monday.

“This is patent falsehood,” Ambassador Maleeha Lodhi said of the Indian claims at a meeting with the Under-Secretary-General for Political Affairs, Rosemary DiCarlo, during which the UN official was also updated on the grave situation in Indian Occupied Kashmir that poses a threat to regional peace and security, according to official sources.

The Pakistani envoy, according to the sources, said that the Indian High Commission in Islamabad was also formally invited to join the trip, but they did not take up the offer, sensing that their claims would be exposed.

Briefing Rosemary DiCarlo, Ambassador Lodhi said that India’s illegal annexation of the state of occupied Kashmir on August 5 had triggered multiple crises in the region and urged the UN to play its part for a peaceful settlement of the decades-old Kashmir dispute.

By unilaterally abolishing Jammu and Kashmir’s special status, India had created a political and human rights crisis in the disputed territory, a crisis with Pakistan, which is a party to the dispute, and a humanitarian crisis which is growing as the lockdown, now its third month, continues, with no end in sight, the Pakistani envoy said. In this regard, she highlighted the acute suffering of the people amid shortages of food and essential supplies; without information about the well-being of family and friends; day after day of total darkness, with the abiding fear of the unknown.

Ambassador Lodhi cited media reports of widespread torture and arbitrary arrests; of thousands being picked up from their homes in the dead of the night, without any trace, as well as the abduction of over 13,000 Kashmiris, including children.

She told the UN official that the situation on the ground was brewing into a full-fledged humanitarian crisis, the true extent of which will only be known once the “draconian” restrictions were lifted.

Ambassador Lodhi dismissed India’s claims of normalcy having returned to occupied Kashmir, as “yet another Indian fallacy”, saying it has been debunked by the international media and human rights organizations.

The near-total shutdown of businesses, schools and civilian activity had forced authorities in occupied Kashmir to take out full-page ads in local newspapers, urging people to open their shops and send their children to schools, machinations that have been roundly rejected by the Kashmiri people, she pointed out.

Pakistan remained “gravely” concerned about what would happen once restrictions are lifted, she said, adding that the anger and resentment was expected to express itself in a popular eruption.

She also brought to the attention of Under-Secretary-General DiCarlo about Amnesty International’s campaign, “Put Humanity First”, demanding India to lift the communications lockdown and let the Kashmiris speak.

Meanwhile, Ambassador Lodhi is attending a round of farewell dinners and lunches hosted in her honour by her counterparts from a number of countries. She is due to end her UN assignment on October 31.

The International Association of Permanent Representatives to the UN, headed by Hungary, also held a lunch for her at which she was presented with a “Tray of Appreciation.”