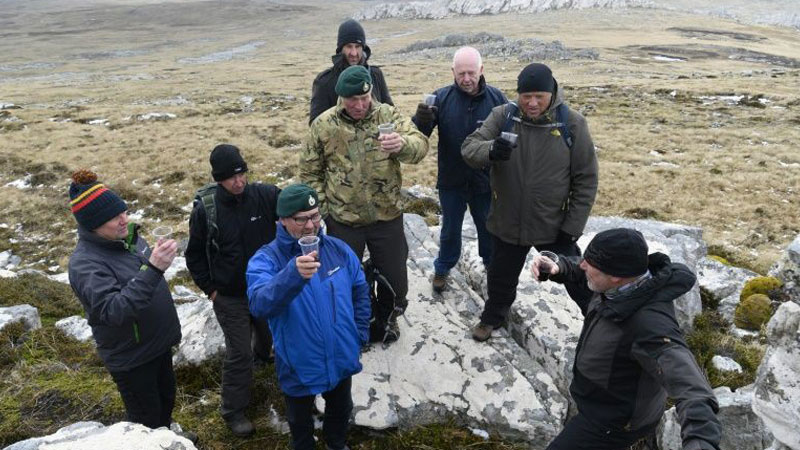 With rain, sleet and snow stinging their faces, a group of British veterans clambered up a rocky hill, retracing the hard yards they trudged nearly four decades ago during the Falklands War.

The ex-Royal Marines returned to visit the scene of fighting in the Falklands Islands, a remote British territory in the south Atlantic that was invaded by Argentina in April 1982.

For 74 days, the 3,400 inhabitants of the islands — in British hands since 1833 — lived under occupation before British troops came to the rescue.

Almost four decades on, the locals have not forgotten the debt they owe.

“The welcome’s been fantastic: we were sat in the pub the other day watching the England rugby match, and one of the locals came up and invited us to a 40th birthday party,” said Stuart Mann, a 55-year-old formerly of 42 Commando.

He was part of “L Company” that attacked a heavily guarded Argentine post on Mount Harriet on the night of 11-12 June, 1982.

The battle lasted about five hours before the Argentine troops surrendered.

Two other strategic peaks just outside the Falklands capital Stanley were taken that night, and two days later, the war was over.

“The weather was a lot like this that night,” said Nick Fry, 55, as gusts of wind almost blew him off balance.

Like Mann, he was just 18 at the time of the battle and vividly remembers the whole company was suffering from dysentery.

Under bleak skies, the marines retraced the routes taken by their own unit and that of another, “K company.”

On the second day, they stopped to pay their respects at the memorial to the only marine killed that night: Lawrence “Lofty” Watts.

“It took several hours, total darkness. I can only describe it as total pandemonium. We did what we had to do, and fortunately the majority of people made it to the top.”

Mann’s daughter organized the trip as a birthday present.

“Very proud of what we did. We acknowledge it was a great achievement,” said fellow veteran Michael Rogers.

The veterans were taken back up the mountain by Martin Elstow, a 59-year-old former marine who now lives on the Falklands and works as a commercial helicopter pilot, while also taking tour groups on visits to the battlegrounds.

He was part of a marines attachment on HMS Broadsword that came under heavy fire from Argentine Skyhawk and Dagger fighter jets.

He’s gleaned most of his battleground knowledge from the veterans he’s guided on the mountains, including Nick Vaux, the 42 Commando commanding officer — later promoted to major general — who masterminded a strategy to attack Mount Harriet from an unexpected direction.

Coming back to the site of battle gives some veterans the chance to get a better understanding of what happened that night.

“We had such tunnel vision about what was going on that we had no concept of anything around us,” said Fry.

Their battle took place in darkness, but in the light of day they were all surprised to see the distance they had covered to reach Mount Harriet’s summit 37 years earlier.

The locals ensure they understand how important their efforts were.

“It’s a great honour for a Falkland islander to meet a veteran,” said Sally Heathman, a communications and media assistant for the Falkland Islands Government.

In 2009, an accommodation center called Liberty Lodge was opened to offer visiting veterans a free place to stay, as well as the use of a vehicle.

“We’ll always try and thank them, so if we meet them in the pub it’s: do you want a drink, or a feed, or something,” added Heathman, 25.

There are many reminders around town of how bitter Falkland islanders feel about the invasion by Argentina, which still claims the islands it calls the Malvinas.

In the men’s toilets at the Victory bar, a picture of the Argentine military dictator who ordered the invasion, Leopoldo Galtieri, hangs on the wall surrounded by a toilet seat. A message reads: “Rot in Hell.”

Meanwhile, the British prime minister who ordered the military expedition to retake the islands, the late Margaret Thatcher, is honoured with a bust outside the legislative assembly.