The pirarucu: the giant prized fish of the Amazon 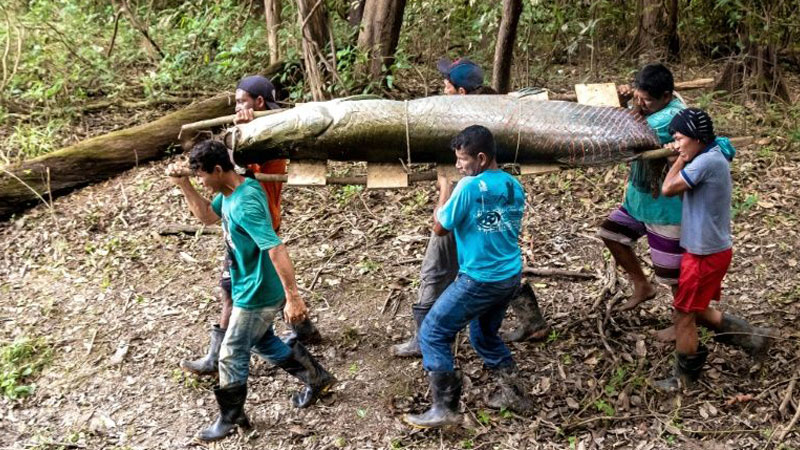 Its white flesh is tender and tasty, it can measure up to three meters long and weigh more than 200 kilograms: meet the pirarucu, one of the world’s largest freshwater fish, and native to the Amazon.

The enormous animal, once threatened with extinction, is now on dinner plates in Rio de Janeiro’s fanciest restaurants, thanks to a number of chefs who have championed the delicacy, and the indigenous communities who ensure its continued survival.

“Without them, there would be nothing left,” says Frederic Monnier, the head chef at the city’s hip Brasserie Rosario.

“What they’re doing for the Amazon is priceless,” adds Jessica Trindade, the Brazilian chef at Chez Claude, an institution in the city’s restaurant scene.

Chef Marcelo Barcellos uses pirarucu in his moqueca, a fish stew swimming in palm oil and seasoned with coriander that is a signature Brazilian dish originating in the northeastern state of Bahia.

Served with a toasted manioc flour mixture and nuts that come straight from the Amazon basin, the moqueca delights foodies’ taste buds and eyes, as the white fish contrasts with the yellow flour and green spices.

The taste is akin to that of other saltwater whitefish like pollock or cod.

Barcellos, the executive chef and owner of the restaurant Barsa, is one of several Rio chefs who have happily added pirarucu to his menu.

But not that long ago, before pirarucu made it to the top tables in the Marvelous City, Arapaima gigas — or Amazonian cod, as it is sometimes called — almost vanished from menus.

It was brought back from the brink of extinction thanks to the establishment at a nature preserve of a sustainable fishing program with strict quotas.

Pirarucu can only be fished from July to November, the non-mating season.

The Taste of the Amazon project has helped do that. Recently, nine chefs traveled to northern Brazil to observe how the Paumari tribe has established sustainable practices for harvesting pirarucu.

Through their contact with the indigenous fishermen, the chefs learned which parts of the fish are the best. That knowledge ended up on their menus.

“It’s an excellent product, with a fabulous flavor, without that earthy taste that some freshwater fish have,” Trindade says.

For Ricardo Lapeyre of the Michelin-starred Laguiole Lab, the experience surpassed his expectations.

He figured he would take the trip just to learn a bit more about how to cook the fish, and bring some new ingredients back to his kitchen.

In the end, he is on board the pirarucu train, and is one of its biggest fans.

“It’s a superior fish — the quality is largely superior to what we get from fish farms,” he said.

“I became aware of the importance of the forest and the support given to projects that benefit local populations.”

Adevaldo Dias, an official at ASPROC, the cooperative that manages the sustainable fishing of the pirarucu, was pleasantly surprised with how keen the chefs were to take part in the project.

“I was struck by their commitment, their understanding of how this fish is good for the Amazon, and the need to pay fishermen properly,” Dias explained.

The sustainable fishing project for the pirarucu was put in place 20 years ago.

Thanks to ASPROC, the fishermen are paid seven reais (about $1.75) per kilo (2.2 pounds), against the four reais they could count on by selling in local markets.

But restaurants pay a whopping 48 reais a kilo, because of transportation costs. The dish is then sold for about 70 reais ($17).

Leonardo Kurihara — the coordinator of Operation Native Amazon (OPAN), which is overseeing the Taste of the Amazon initiative — chefs are vital because “they are at the other end of the chain, presenting the product to the consumer.”

Felipe Rossoni, also at OPAN, explains that the initiative has cleared the way for new markets for the pirarucu. “Sustainable fishing helps preserve the environment, and reinforces the autonomy and clear identity of traditional communities,” Rossoni said.