Flavoursome food with a garnish of humour 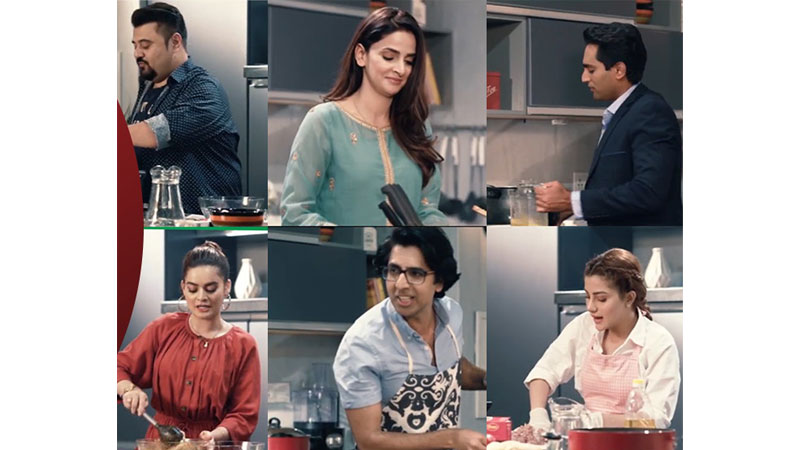 Sitting on your couch and watching your favourite celebrities indulge a cook-off challenge has been made a reality by the famous food brand in the form of Shan Kitchen.

Its kick start with the eccentric Khalid Malik and the beautiful Sohai Ali Abro in the first episode was one not to be missed and left the audience wanting more. Shortly after we saw the next teaser starring Danish Ali and Minal Khan. Everyone was super excited to find out what was coming their way in the next episode.

A ticking clock and so many ingredients on the counter to finish their respective dishes, the tension levels are at an all-time high. The constant teasing and antics between Danish Ali and Minal Khan brought about the real laughter and kept the audience glued to the screen.

The start of Episode 2 was a hilarious one where we saw comedian and host Danish Ali pouring the entire jug of oil in the cooking pot cracking a joke stating, “Isme bohat tail hai, itna tou PSO ke paas bhi nhi hai”. This surely proved his statement made earlier of how he rarely ever cooks whereas actress Minal Khan was oozing with confidence and went along making her dish effortlessly without any worries. The chemistry and competitiveness between the two celebrity chefs brought about the element of zing that we Pakistanis possess. Danish at his witty best, made us chuckle throughout, whereas Minal being her confident self-gave him a tough time, irrespective of providing assistance to his competitor. We knew then and there who the winner would be but we chose to dig in a little further.

Post the antics and constant banter between the two competitors, we learned that both Danish was making White Qorma whereas Minal was making Chicken Karahi.

We were wondering what the naïve and clueless Danish was going to dish out. Danish from the start was having ample loads of fun as he constantly tried to distract Minal from getting her dish ready on time. He was “massaging” the chicken with a spatula, showing the marinated chicken to Minal and kept on trying to get her off track to get any sort of lead on his dish.

Minal on the other hand was composed throughout acted like a true professional as she prepared her Qorma…okay, she may have gotten a bit sidelined when the live chicken was brought to the counter! I mean, what in God’s name was happening in this kitchen? Absolutely hilarious. Following this we saw a bit of heat in the kitchen where Danish poured in some random ingredient in Minal’s bowl and in retaliation we saw her doing the same. Yikes!

The start of Episode 2 was a hilarious one where we saw comedian and host Danish Ali pouring and entire jug of oil in the cooking pot cracking a joke stating, ‘Isme bohat tail hai, itna tou PSO ke paas bhi nhi hai’. This surely proved his statement made earlier of how he rarely ever cooks whereas actress Minal Khan was oozing with confidence and went along making her dish effortlessly without any worries

To make the proceedings more interesting, Shan planted two mystery boxes in front of the two chefs. The mystery boxes contained 5 ingredients of which both the chefs had to choose one, to include in their dishes.

This changed the entire ball game of the episode. Minal got peas from Danish and she chose butter for him dropping a cheesy line on how she’s buttering up with this chosen ingredient. Both the choices were completely random and this was making us bite our nails to find out how the two would utilize it. As time began to run out and the alarm for the final ten minutes went off, we saw a state of frenzy in the kitchen. Both the celebrities rushed to put the final touches on their dishes. The dishes were ready and presented by the two contenders. Safe to say we knew which one looked and tasted good as well. Sorry, Danish but the real winner is Minal for this one!

The whole episode had a fun vibe and kept us waiting on the final results. Both of the competitors tried to put pressure on each other, by playing mind games. Though, let’s be honest, the pouring of a random ingredient in each other’s dishes was something we didn’t expect at all!

Shan Kitchen’s episodes are getting us hyped for the next immediately and has provided us with hysterical laughs, moments of competitiveness and got us salivating on the completion of the dish. Shan proves itself once again on how dedicated it is to show delectable food as Pakistan’s real identity. We are eager to find out who the next two celeb chefs will be!