People in Sindh deprived of basis facilities due to corruption: PM 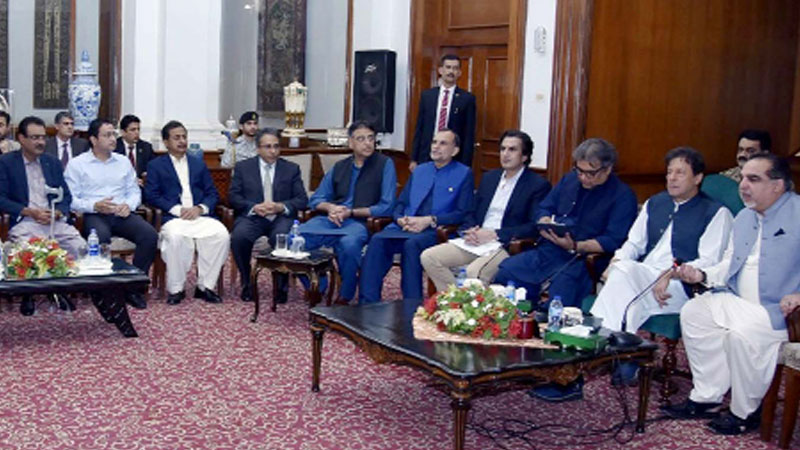 Prime Minister Imran Khan on Monday regretted that the people of Sindh province are deprived of the basic facilities of life, including safe drinking water, health and education, due to corruption.

The prime minister told a meeting of members of Sindh Assembly belonging to the Pakistan Tehreek-e-Insaf here at the Governor House that the federal government is cognizant of Karachi’s civic problems, particularly relating to transport and waste management, and is ready to play its role as per available resources.

Calling Karachi the country’s economic hub, the prime minister regretted that the previous governments ignored the problems of the metropolitan and its people. He said the PTI government inherited the heaviest burden of fiscal debt, for which, he said, steps are being taken to improve the financial situation. He said the local government system will help Karachi overcome its problems.

Earlier, the MPAs apprised the prime minister of the ongoing development work as well as problems being faced by the people in their constituencies. The prime minister directed the federal ministers to enhance liaison with the PTI’s members of provincial assembly.

Minister for Planning Khushro Bakhtiar made a detailed presentation with regard to the federal government-funded development programme for Karachi. He particularly referred to K-4 water project for Karachi, assuring that the mega water supply scheme will be implemented at every cost.

Separately, at a briefing given by Sindh Infrastructure Development Company Limited (SIDCL) over the progress made on the ongoing federal government projects in the mega city, Prime Minister Imran Khan said the federal government is making all-out efforts to resolve the issues faced by the people in Karachi. He observed that the federal government has taken the responsibility of those works which had been the obligation of the provincial government to undertake. The prime minister also directed for expediting pace of work on the Karachi package projects.

Meanwhile, the prime minister assured a Grand Democratic Alliance (GDA) delegation that the federal government will extend the coverage of Ehsaas and Sehat Insaf programmes up to interior Sindh.

Talking to a Muttahida Qaumi Movement (MQM) delegation led by Federal Minister Dr Khalid Maqbool Siddiqui, Prime Minister Imran Khan said the federal government is aware of the basic challenges faced by the residents of Karachi and is fully committed to addressing those on a long-term basis. He said the country’s commercial hub cannot be ignored and the federal government will ensure that its potential is fully explored. The PTI government stands by its commitment and will help resolve the issues of water scarcity, inadequate waste management, poor transportation and others for good, he added.

The MQM delegation while sharing their reservations about certain issues linked to urban areas of the province with the prime minister sought implementation of Article 140-A of the constitution in Karachi. They demanded that the devolution of power as per Constitution must be implemented in its true spirit.