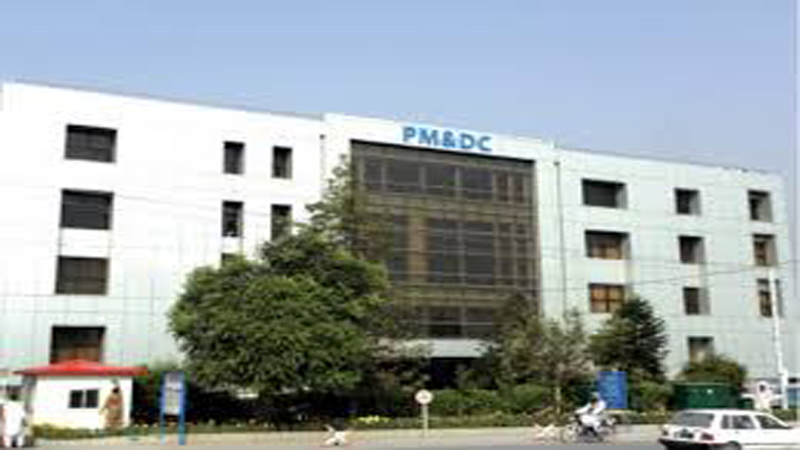 As many as 300 employees of the Pakistan Medical and Dental Council (PMDC) on Monday protested against their removal from job through a presidential ordinance.

The employees were irked by the surprising move, as the Ministry of National Health Services (NHS) through the Islamabad district administration and police took over the possession of the PMDC building and directed around 300 employees of the council that the office will remain shut for one week.

In first week of January this year, President Dr Alvi promulgated an ordinance titled ‘PMDC Ordinance 2019’ suggesting that a 17-member council would deal with the issues related to medical colleges, attached hospitals and health professionals. Under the ordinance the new formulated body would be called as Pakistan Medial Commission (PMC).

Large number of employees gathered in front of PMDC building and chanted slogans in favour of restoration of their jobs. The protestors said that it was very unethical as well as wondering that none of the authorities care about the employees and even occupied the building on holiday (Sunday).

They alleged that actually the ministry willing to replace their own people against while removing us that, they termed, illegal, adding that through this approach the registration of some private medical colleges, those are not up to the required standards, would be come into practice.

A protesting employee told Daily Times that PMDC the government is intending to nominate a selected group and impose them on the council to look into all affairs of the council. The official added that world Federation of Medical Education (WFME) and Foundation for Advancement of International Medical Education and Research (FAIMER) are also annoyed over such unjust measures by the government.

However, the NHS ministry said in a statement that the President (Dr Alvi) has signed a new ordinance titled ‘Pakistan Medical Commission Ordinance, 2019’ by virtue of which a new era will begin with reference to regulation and control of the medical profession by establishing uniform minimum standard of medical education and training and recognition of qualifications in medicine and dentistry.

“Implementation of new Ordinance requires dissolution of current PMDC. Government of Pakistan hence on Sunday directed the temporary shutting down of the offices of Council. This would ensure protection of the essential records and assets of PMDC. The offices will remain shut for one week. PMC shall be a body corporate consisting of (1) The Medical and Dental Council; (2) The National Medical and Dental Academic Board; and (3) The National Medical Authority, which will act as a Secretariat of the Commission,” it stated.

The government of Pakistan has acted immediately to protect the extremely important records relating to licensing and registration of all medical and dental practitioners in Pakistan as well as the records of medical and dental educational institutions in view of the approval of the new Pakistan Medical Commission Ordinance. The new medical commission is expected to start operations within a week.

When contacted, PMDC registrar retired Brig Dr Hafizuddin Ahmed Siddiqui said that it was very disappointing and a sheer violation of fundamental rights.

“Although it not decided finally by the employees, but we must go in court to fight for justice”, he suggested adding that good and bad people existed everywhere but ‘weigh all with same scale’ is sheer discrimination.

“I strongly condemn such autocracies”, he remarked.

Meanwhile, a large number of PMDC visitors belonging to various parts of the country also upset when they found the building sealed. “I come from Khyber Pakhtunkhwa to collect my registration certificate for which I already applied but surprised to see this move”, he said adding that I was not even unaware from this happening by the time I left home in morning. Similarly, dozens of such visitors despondent by the move and turned to their homes.