PM Imran, Pakistan part and parcel of each other: Firdous 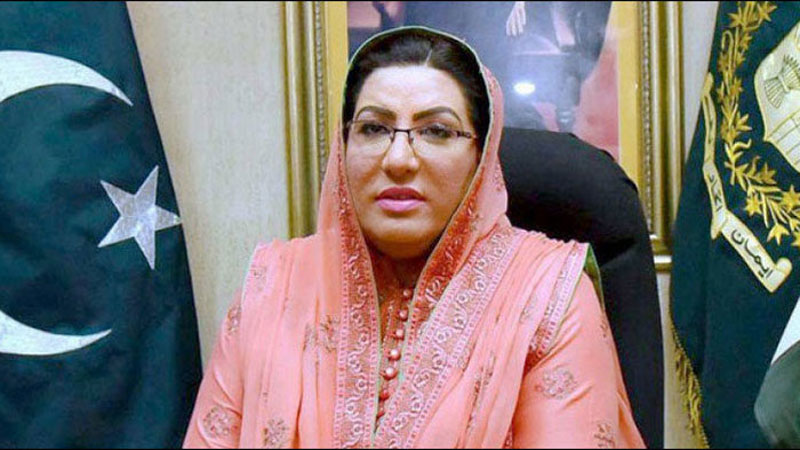 Special Assistant to the Prime Minister for Information and Broadcasting Dr Firdous Ashiq Awan Monday said Prime Minister Imran Khan and Pakistan were part and parcel of each other.

Imran Khan, she said, was not as much necessary for the Pakistan Tehreek-e-Insaf (PTI) politically as he was national necessity for the country in the current situation and challenges.

He was the only option for Pakistan as the two political parties, which took turns to rule the country for decades, had ruined the state institutions and economy, leaving the common man in sheer poverty, she said while addressing a press conference here.

Dr Firdous said after a long time, Pakistan had got an upright leader in the shape of Imran Khan, who had no personal agenda or vested interests but the commitment to serve the country and the nation. To a question, the special assistant said Maulana Fazlur Rehman was still in confusion whether to hold a public meeting or stage a sit-in and when he would disclose his agenda the government would announce its strategy accordingly.

The government, she said, would not obstruct the Jamiat Ulema-e-Islam’s peaceful protest, which was their constitutional right. However, she said, the general public had witnessed through media that a militia force was being trained and organized through massive financing. She asked what it meant that around 10,000 well-trained and equipped militia men would be part of the ‘Azadi March’. Whether they were coming to record their protest or to wage a war. The government would take action keeping in view the situation at that time and as per provisions of the Constitution and law, she added.

To another question, Dr Firdous said Maulana Fazlur Rehman remained the chairman of Kashmir Committee for 10 years but he did nothing for the cause of Kashmiris. “The PTI government under the able leadership of Prime Minister Imran Khan has very effectively fought the Kashmiris case all over the world,” she said, adding the prime minister internationalized the issue in his historic speech at the United Nations General Assembly. She said Fazl had double standards. He would be again pursuing his personal and political interests in the name of Kashmir cause on October 27 when the entire Pakistani nation would be expressing solidarity with their brethren in the occupied Kashmir facing curfew, tyranny and aggression at the hands of India. To a query, the special assistant said the present government was committed to make the students of religious seminaries a great asset of Pakistan. It had irked the Maulana as he could no longer use those youth to serve his personal political interests, she added. To another question, she said Maulana Fazlur Rehman had been levelling electoral rigging allegations for the last one year. Instead of approaching the appropriate forums like the Election Commission of Pakistan, election tribunals or courts, he was attempting to topple the government and seeking the prime minister’s resignation, which clearly manifested his intention and interests.

On the other hand, she said, the PTI had decided to stage a long march and sit-in after a yearlong struggle when their concerns regarding the election results of four constituencies were not addressed by all the relevant forums. The PTI’s sit-in was for the supremacy of Parliament, rule of law and against the menace of corruption, which was obviously aimed at for the betterment of the common man, she added. Dr Firdous said Pakistan People’s Party Chairman Bilawal Bhutto was still in perplexity that ‘how Bhutto died in Larkana’. He (Bhutto) was alive in Sindh where the people were dying of hunger and sheer poverty during the PPP’s bad governance coupled with miserable law and order.