Selectors pick two rookie speedsters for tour Down Under

* Rizwan replaces Sarfaraz as keeper, fast bowler Irfan is back 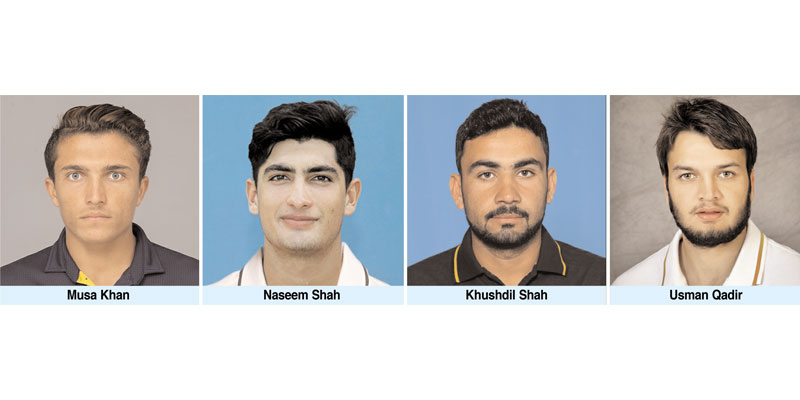 LAHORE: The Pakistan Cricket Board (PCB) selection committee, headed by former Test captain Misbahul Haq, on Monday picked two rookie pacers in 16-member national squads named for the upcoming tour of Australia. New Pakistan captain Azhar Ali will have an exciting pace attack at his disposal in the two-Test series. Sixteen-year-old Naseem Shah and Musa Khan, 17, will join another teenager Shaheen Shah Afridi in a potent pace attack which also includes Mohammad Abbas and Imran Khan. It is pertinent to mention that Imran has been recalled after playing his ninth and final Test in Sydney in January 2017. Brisbane hosts the first Test from November 21 and the second game is a day-nighter at Adelaide from November 29. Pakistan’s Twenty20 outfit will be captained by batsman Babar Azam. Pakistan will play three T20s against Australia prior to the Test series. The first will be held on November 3 in Sydney. The second T20 will be played in Canberra on November 5, while the third in Perth on November 8.

As announced by the PCB earlier, Sarfaraz Ahmed has not been included in either squad. Fast bowler Hasan Ali has been also left out because he is under a rehab programme after his back injury. Batsmen Umar Akmal and Ahmad Shahzad, who had been included in the T20 team for the series against Sri Lanka, have also been dropped. The chief selector also decided to keep veteran all-rounders Mohammad Hafeez and Shoaib Malik out of the squads, keeping in view the PCB’s youth policy. The exit from Twenty20 internationals means curtains for Malik who had already announced retirement from Tests and one-day internationals. Hafeez was part of Pakistan’s Twenty20 squad in South Africa earlier this year but was not played. At 39, he has little hope of competing in international cricket again.

The 19-year-old Musa from Islamabad has played seven first-class matches in which he has taken 17 wickets, while Lahore’s 16-year-old Naseem has also claimed 17 wickets in five first-class matches. In the four-day first-class Quaid-e-Azam Trophy 2019-20, Musa has picked up five wickets in four matches and Naseem has bagged nine wickets in three matches. Both fast-bowlers, regular features of the Pakistan junior sides, are regarded as the quickest on the domestic circuit, regularly touching 145kph on the speed gun, with tremendous potential and bright futures. The selection committee has also rewarded the high-performing players in domestic circuit. In the T20I side, they have included Bannu’s 24-year-old middle-order batsman Khushdil Shah and 26-year-old wrist spinner Usman Qadir of Lahore, who has played seven Big Bash League matches for Perth Scorchers. In the ongoing National T20 Cup, Khushdil has scored 93 runs for Khyber Pakhtunkhwa at an impressive strike-rate of over 160. Khushdil was the second highest run-getter in the Pakistan Cup 2019, scoring 316 runs at 105.33 with the help of two centuries while Usman has taken four wickets at an economy-rate of under seven.

“There is a need to play a different type of cricket, the balance of the squads is reflective of us having options to play aggressive, attacking cricket,” head coach and chief selector Misbah told media at a press conference. “Yes it’s a brave and bold decision to select the likes of Musa and Naseem, but we know that their fresh and attacking approach will give us something different. I am pretty sure these two lads will surprise a lot of people with their pace, controlled swing and ability to bowl long spells at a consistent speed.” Talking about Sarfaraz future, he said: “I think it is just the matter of regaining his form. As soon as his form is restored, I think the doors are open. There is no conspiracy or any such thing in the matter. It is a straight forward thing. I think it is a clear message for Sarfaraz and others as well.”

Misbah said that Pakistan’s Test batting was experienced, talented and pretty settled. “So, we have not tweaked it much, except including prolific Abid Ali in place of Fakhar Zaman and adding Iftikhar Ahmed, who can also bowl off-spin. We have a strong batting line that we expect to perform in the two Tests. For the T20Is, Mohammad Irfan has been rewarded for the form he has shown recently. Based on horses for courses and his form, the Australian conditions will present Irfan with the opportunity to excel. This selection has also been made while looking at next year’s ICC T20 World Cup, which will be played in Australia. If we can successfully manage his workload, then he can be a valuable asset for us in next global event. Similarly, Khushdil has been added as he is in-form and has displayed his power-hitting abilities, while Usman brings to the table his experience of playing in Australia. Usman also provides cover for Shadab Khan, who is on track for reclaiming his match form. Asif Ali has been retained due to his sparkling form in the National T20 Cup, while we have kept faith in Iftikhar who has all the ability and talent in the middle-order,” he added.