Soldier, six civilians martyred in worst of CFVs across LoC 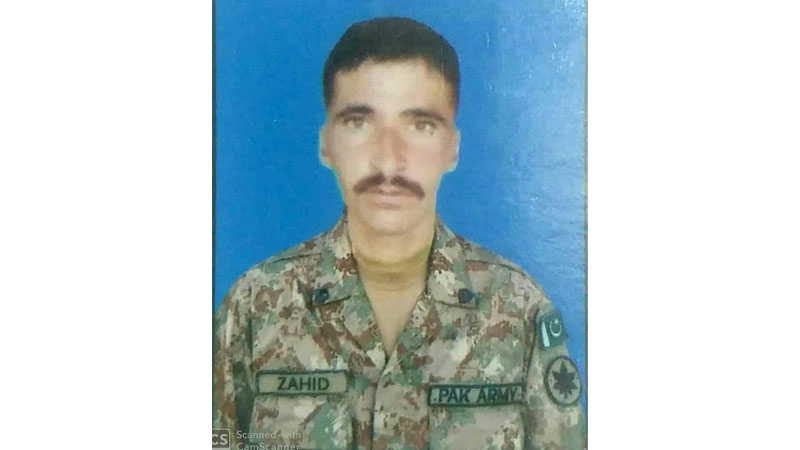 At least six civilians and a Pakistani soldier were martyred as Indian troops resorted to “indiscriminate and ruthless” shelling from across the Line of Control (LoC) in Azad Jammu and Kashmir (AJK), officials said on Sunday.

Officials said that nine other civilians were injured, adding that this was the highest death toll in 2019 in a single day of Indian shelling from across the dividing line.

The Inter-Services Public Relations (ISPR) notified through a tweet that one soldier had been martyred in the exchange of fire, while two others were injured.

The ISPR added that in response to unprovoked ceasefire violations by India in Jura, Shahkot and Nauseri sectors, nine Indian soldiers were killed while several others were injured and two Indian bunkers were destroyed.

A subsequent tweet by the ISPR director general said: “Indian Army shall always get befitting response to CFVs. Pakistan Army shall protect innocent civilians along LOC [and] inflict unbearable cost to Indian Army. Indian lies to justify their false claims [and] preparations for a false flag operation will continue to be exposed with truth.”

In a post shared on Twitter, he added, “This is the height of savagery. The world must not stay silent over it.”

The worst-hit areas were the Nauseri Sector of district Muzaffarabad and its adjoining Jura Sector of Neelum Valley.

“The shelling began before midnight and it was the heaviest [so far],” said Muzaffarabad Deputy Commissioner Badar Munir.

Residents who posted videos on social media said the Indians had fired tracer munitions as well.

Tracer ammunition are cannon calibre projectiles that are built with a small pyrotechnic charge in their base. Ignited by the burning powder, the pyrotechnic composition burns very brightly, making the projectile trajectory visible to the naked eye during daylight and very bright during night time firing.

Munir said one of the shells pierced through a house in Nosadda village, leaving two family members dead and as many injured. The deceased were identified as Haji Azam and his son Rafaqat and the injured were Rafaqat’s mother Roshan Jan, 55, and daughter Kainat, 4.

In the same village, Haji Sarfraz, son of Ghulam Rabbani, was killed and Nargis, 45, wife of Irshad, was injured, the deputy commissioner said.

Elsewhere in Nauseri Sector, Liaquat Khan, 35, from Swabi, and Faisal, 30, from Taxila were killed when a shell fell near their tent on a link road, he said. The two were working as labourers on Panjkot Road.

The DC said that Shabbir, 38, son of Yaqoob, and his mother Begum Jan, 60, were injured in Kanoor village of Nauseri Sector.

According to Munir, material losses in the area were still being ascertained. In Neelum Valley, Jura Sector in the lower belt was the worst-hit area, said Akhtar Ayub, a disaster management official based in district headquarters Athmuqam.

“It seemed that they (Indian troops) wanted to destroy everything,” said Raza Awan, a resident of Jura.

Faiz Talab, a police official in Athmuqam, told a private news channel that a resident of Loralai, identified as Zafar Khan, 45, was killed in Jura village and a woman and three young girls were injured in Islampura village.

He added that 43 shops, 53 houses, six vehicles and three motorcycles had been damaged by Indian shelling.

The Indian provocation comes as tensions remain high between India and Pakistan over the former’s move to revoke Indian-held Kashmir’s special autonomy on August 5. On October 15, at least three civilians had died and eight others injured in AJK after Indian troops resorted to similar indiscriminate shelling from across the LoC, officials had said.

Meanwhile, Indian Charge d’ Affaires Gaurav Ahluwalia was summoned to the Foreign Office by Director General (SA & SAARC) Dr Mohammad Faisal, who condemned “the unprovoked ceasefire violations by the Indian occupation forces along the LoC in Jura, Shahkot and Nausehri Sectors on October 18 and 20”.

According to a statement released by the Foreign Office, “due to the indiscriminate and unprovoked firing” by Indian troops, which included the use of heavy artillery, five innocent civilians of Village Nausadda and two non-resident civilian labourers were killed while six others sustained serious injuries.

The statement noted that civilian populated areas along the LoC and Working Boundary had been constantly targeted by Indian forces “with artillery fire, heavy calibre mortars, and automatic weapons”.

“The deliberate targeting of civilian populated areas is indeed deplorable and contrary to human dignity, international human rights and humanitarian laws,” it added.