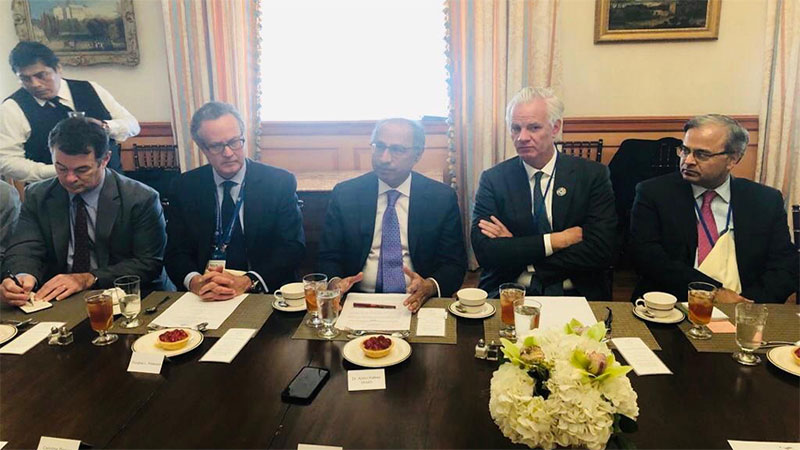 Hafeez Shaikh and his team, who are in Washington DC to attend the annual meetings of IMF/WB-2019, held a series of meeting with these heads and business leaders and informed them about the measures taken by the government to curtail the twin deficits and revive various sectors of economy through institutional reforms and collaborations with regional and international investment partners.

The delegation, which also included President State Bank of Pakistan Dr Reza Baqir and Secretary Finance Naveed Kamran Baloch, held an extensive meeting with President of Asian Development Bank (ADB) Takehiko Nakao to exchange views on the ongoing projects sponsored by the bank in Pakistan as well as planned portfolio, according to a press statement issued by the Ministry of Finance early Saturday.

Shaikh also met with Hartwig Schafer, vice president of South Asian Region (SAR), World Bank and his team, the statement said, adding that the meeting reviewed bank’s portfolio in Pakistan and exchanged views on further steps to strengthen cooperation between Pakistan and the Bank.

Later, Dr Shaikh and the delegation met with Jihad Azour, Director Middle East and Central Asia Department (MCD) at the International Monetary Fund. They discussed the implementation of the ongoing IMF program while on the occasion the IMF director appreciated the progress made towards economic stabilization as well as government commitment to the reform process.

The members of the delegation also participated in the G-24 Ministers and Governors Meeting on the sidelines of the annual meetings of IMF/WB-2019. Dr Shaikh also attended informal meeting of the SAARC finance ministers which focused on trade facilitation within the SAARC region. The delegation also participated in the Standard Chartered Global Investors Forum in which Dr Shaikh gave an overview of the economic situation in Pakistan and progress made with the implementation of the IMF program. He urged the participants to invest in Pakistan, the statement added.

Meanwhile, US-Pakistan Business Council hosted a luncheon roundtable in honour of Dr Abdul Hafeez Sheikh and members of Pakistan delegation at the US Chamber of Commerce. Talking to the participants, Dr Shaikh highlighted the government’s focus on improving the ease-of-doing-business and encouraged the US companies to expand their footprint in Pakistan. He mentioned that the economy is on its path to stabilization and the US businesses should benefit from investment opportunities available in the country.