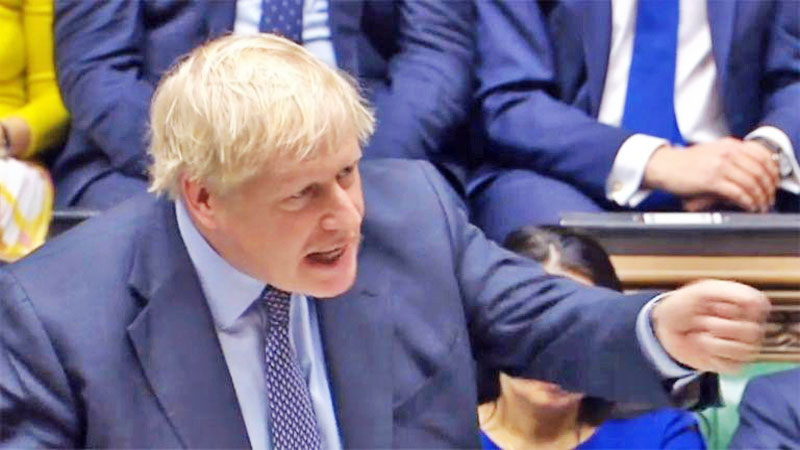 British MPs voted Saturday to force Prime Minister Boris Johnson to ask the European Union to delay Brexit yet again but he insisted Britain must leave on October 31.

In a day of high drama in the House of Commons, MPs declined to give their backing to the divorce agreement Johnson struck with the EU this week until accompanying legislation has been passed.

In doing so, MPs triggered a law requiring Johnson to write to EU leaders asking to delay Brexit to avoid a “no deal” departure in less than two weeks.

The result is a major blow to Johnson, who said he would rather be “dead in a ditch” than prolong the tortuous Brexit process that has left Britain in political turmoil since the 2016 EU referendum.

But in a typically defiant response, the Conservative leader refused, sparking outrage among opposition MPs — and fresh uncertainty about what happens next.

“I will not negotiate a delay with the EU and neither does the law compel me to do so,” he told MPs, who were sitting on a Saturday for the first time since the 1982 Falklands War.

He said he would tell EU leaders that “further delay would be bad for this country, bad for the European Union and bad for democracy”.

The Tory party went further, writing in a tweet: “The Prime Minister will not ask for a delay.”

Brussels urged Britain to explain its plan as soon as possible while Labour leader Jeremy Corbyn, whose party opposed the deal, said: “The prime minister must now comply with the law.”

Securing the deal at Thursday’s Brussels summit was a personal victory for Johnson, a figurehead in the 2016 Leave campaign who has vowed to deliver Brexit on October 31 come what may.

He has spent the last 48 hours frantically trying to persuade MPs to back it, and won support from many of the eurosceptic Conservative MPs who rejected a previous divorce agreement.

But parliament — like the frustrated public — is still bitterly divided over how and even if Britain should end four decades of integration with its closest neighbours.

Opposition parties and Johnson’s own Northern Irish allies rejected the text, and joined together to back an amendment brought by former Conservative minister Oliver Letwin.

This amendment made approval of the deal contingent on parliament passing legislation to ratify the text before Britain leaves the EU.

Johnson needed a clear vote in favour of the deal to avoid triggering a law passed against his will last month, requiring him to send a letter asking for a delay of three months to Brexit.

If he refuses, he is likely to face a court challenge forcing him to send it.

If EU leaders agree, he must accept, or if they offer an alternative date, he must also accept unless parliament intervenes.

Johnson earlier warned a third Brexit delay was “pointless”, adding: “Now is the time to get this thing done.”

He said he would introduce legislation next week to implement his Brexit deal, expressing hope that if it passes, Britain could still leave on October 31.

The first vote could come as soon as Tuesday.

Outside parliament, tens thousands of people marching to demand a new referendum that might reverse Brexit erupted into cheers at the result.

“The first referendum was jumping on a train without a destination. Now that we have a destination, we need to have a second referendum,” said Douglas Hill, 35, on the march with his Estonian wife.