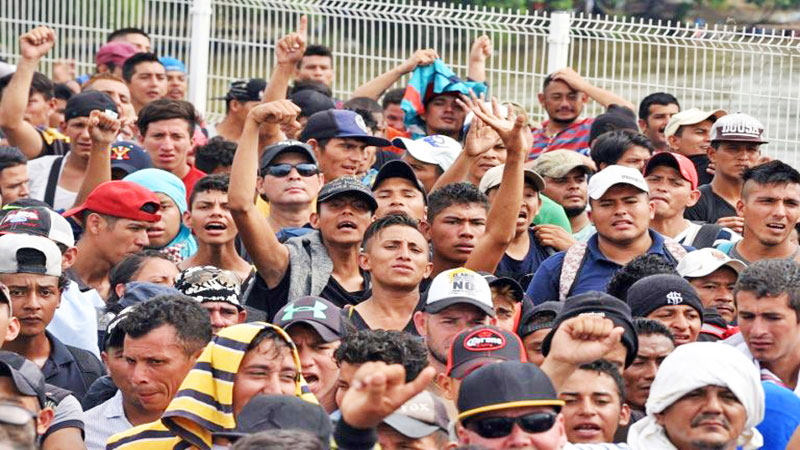 A year ago, thousands of Central American men, women and children chasing the American dream arrived in Mexico in a massive caravan that has left a lasting legacy — just not the one people generally thought it would.

Their arrival at the Guatemala-Mexico border on October 19, 2018, was a harbinger of the drama to come: defying the Mexican riot police sent to stop them, they forced their way through a series of barricades and flooded onto the border bridge, camping out until the authorities relented and let them cross.

Fleeing chronic poverty and brutal gang violence at home, they banded together in hopes of finding safety in numbers against the dangers of the journey, including criminal gangs that regularly extort, kidnap and kill migrants.

The images made an impact around the world: carrying their meager belongings on their backs, many migrants pressed small children to their chests or held them by the hand. They hitched rides when they could, but often just walked in a giant sea of humanity, many in plastic shoes or flip-flops.

Honduran migrant Lizeth Garcia, 23, says she has mixed feelings when she looks back on the trek, which she made with her husband, Mauricio, and their then-one-year-old son.

“People helped us a lot along the way, in Guatemala, in Mexico. I would ask for food for my baby, and they would always help,” she told AFP from Norfolk, Virginia, where she now works as a cleaner, wearing an ankle monitor while her asylum case works its way through court.

But there are bad memories, too.

“We slept in the street, for a really long time,” she said.

By the time they reached the border, her son had developed severe pneumonia and was vomiting blood. He had to be hospitalized.

“My baby almost died on me in Tijuana,” Mexico, she said.

Now, she and her husband are expecting their second child in two months’ time. If all goes according to plan, he will be born a US citizen.

Gearing up for crucial midterm elections in the United States that November, President Donald Trump immediately pounced, firing up his conservative base with the rhetoric that helped get him elected in 2016.

He sent nearly 6,000 troops to the border, calling the caravan an “invasion” and warning it was full of “gang members” and “criminals.”

It was not the first caravan of its kind. Activists have been organizing similar ones since 2010 to raise awareness of migrants’ plight.

But it was by far the biggest, swelling to as many as 7,000 people, according to the United Nations.

It inspired numerous other caravans, and seemed for a time as if it would change the face of migration in the Americas.

Arguably, it did — though not in the way many people expected.

“At the time, people were saying, ‘We’re seeing a change in the migrant experience,'” said Leticia Calderon, an expert on migration at Mexico’s Mora Institute.