ISTANBUL: Turkey will set up a dozen observation posts across northeast Syria, President Tayyip Erdogan said on Friday, insisting that a planned “safe zone” will extend much farther than US officials said was covered under a fragile ceasefire deal. 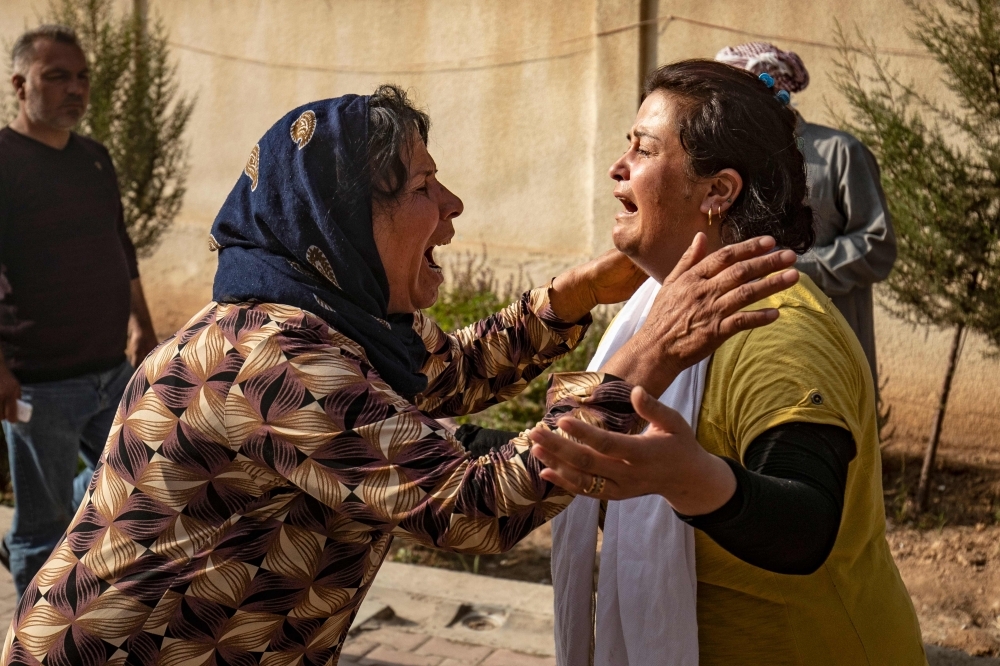 Less than 24 hours after he agreed the five-day truce to allow Kurdish forces time to pull back from Turkey’s crossborder assault, Erdogan underlined Ankara’s ambition to establish a presence along 300 miles of territory inside Syria.

On the border itself shelling could be heard near the Syrian town of Ras al Ain on Friday morning despite Thursday’s deal and a spokesman for the Kurdish-led forces said Turkey was violating the ceasefire, hitting civilian targets in the town.

But Reuters journalists at the border said the bombardment subsided around mid-morning and a US official said most of the fighting had stopped, although it would “take time for things to completely quiet down”.

US President Donald Trump said on Friday he had spoken with Erdogan who told him there had been some “minor” sniper and mortar fire in northeastern Syria despite the truce, but that it had been quickly eliminated.

“He very much wants the ceasefire, or pause, to work,” Trump said in a post on Twitter. “Likewise, the Kurds want it, and the ultimate solution, to happen.”

The United Nations Office for the Coordination of Humanitarian Affairs described the situation as “reportedly calm in most areas, with the exception of Ras al-Ain, where shelling and gunfire continued to be reported earlier today,” UN spokesman Stephane Dujarric said.

The truce, announced by US Vice President Mike Pence after talks in Ankara with Erdogan, sets out a five-day pause to let the Kurdish-led Syrian Democratic Forces (SDF) militia pull out of the Turkish “safe zone”.

The deal was aimed at easing a crisis that saw Trump order a hasty and unexpected US retreat, which his critics say amounted to abandoning loyal Kurdish allies that fought for years alongside US troops against Daesh.

Turkey’s offensive created a new humanitarian crisis in Syria with 200,000 civilians taking flight, according to Red Cross estimates. It also prompted a security alert over thousands of Daesh fighters held in Kurdish jails.

Trump has praised the deal with NATO-ally Turkey as one that would save lives. Turkey cast it as a victory in its campaign to control territory more than 30 km (around 20 miles) deep into Syria and drive out Kurdish fighters from the YPG, the SDF’s main Kurdish component. Ankara considers the YPG a terrorist group because of its links to Kurdish insurgents in southeast Turkey.

“As of now, the 120-hour period is on. In this 120-hour period, the terrorist organisation, the YPG, will leave the area we identified as a safe zone,” Erdogan told reporters after Friday prayers in Istanbul. The safe zone would be 32 km deep, and run “440 km from the very west to the east”, he said.

But the US special envoy for Syria, James Jeffrey, said the accord covered a smaller area where Turkish forces and their Syrian rebel allies were fighting, between the two border towns of Ras al Ain and Tel Abyad, just 120 km away.

Speaking to journalists later on Friday, Erdogan said Turkey plans to set up 12 observation posts in northeast Syria. A map of the region showed the planned posts stretching from the Iraq border in the east to the Euphrates river 300 miles to the west.

In Brussels on Friday night at NATO headquarters, US Secretary of State Mike Pompeo said, “we also saw some very positive activity — the beginning of a coordination that will be required so that there can in fact be a safe withdrawal of the YPG fighters that are inside the Turkish-controlled area that is covered by the agreement.”

NATO Secretary General Jens Stoltenberg emphasised that northern Syria was of concern and matters to all NATO allies.

“We all understand that we have a common enemy — Daesh,” Stoltenberg said. “We must not jeopardize the gains we have made in the fight against our common enemy Daesh.”

NATO defense ministers would address the issue when they meet next week, Stoltenberg said.

A US defense official, speaking on condition of anonymity, said the United States would continue aerial surveillance in northeastern Syria to monitor prisons holding Daesh militants.

With the United States pulling its entire 1,000-strong contingent from northern Syria, the extent of Turkey’s ambitions is likely to be determined by Russia and Iran, filling the vacuum created by the US retreat.

The government of Syrian President Bashar al-Assad, backed by Moscow and Tehran, has already taken up positions in territory formerly protected by Washington, invited by the Kurds.

Jeffrey acknowledged that Turkey was now negotiating with Moscow and Damascus over control of areas that Washington was vacating and were not covered by the US-Turkish truce pact.

“As you know we have a very convoluted situation now with Russian, Syrian army, Turkish, American, SDF and some Daesh elements all floating around in a very wild way,” Jeffrey said.

“Now, the Turks have their own discussions going on with the Russians and the Syrians in other areas of the northeast and in Manbij to the west of the Euphrates. Whether they incorporate that later into a Turkish-controlled safe zone, it was not discussed in any detail.”

The joint US-Turkish statement released after Thursday’s talks said Washington and Ankara would cooperate on handling Daesh fighters and family members held in prisons and camps — an important international concern.

Pence said US sanctions imposed on Tuesday would be lifted once the ceasefire became permanent.

In Washington, US senators who have criticized the Trump administration for failing to prevent the Turkish assault said they would press ahead with legislation to impose sanctions against Turkey.

Senate Majority Leader Mitch McConnell wrote in an op-ed in the Washington Post that the withdrawal of US forces from Syria was “a grave strategic mistake.”

The Turkish assault began after Trump moved US troops out of the way following an October 6 phone call with Erdogan.

Turkey says the “safe zone” would make room to settle up to 2 million Syrian war refugees – roughly half the number it is currently hosting — and would push back the YPG militia.