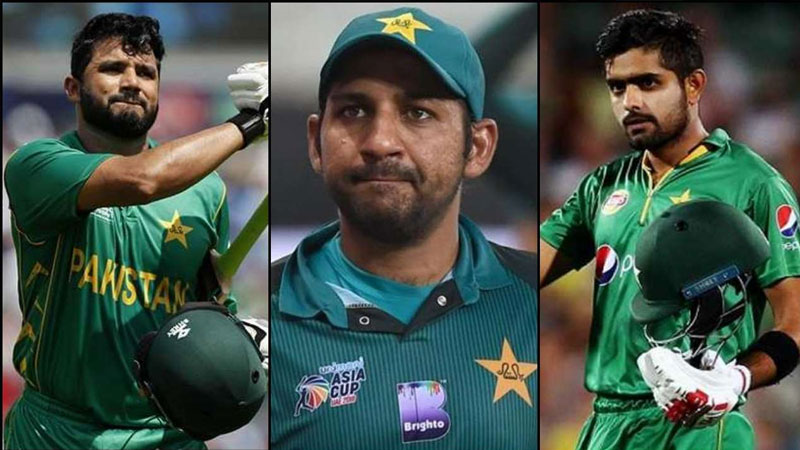 The Pakistan Cricket Board (PCB) on Friday sacked Sarfaraz Ahmed as Test and Twenty20 skipper due to “drop in overall form”, giving reins of the Test squad to Azhar Ali and putting Babar Azam in charge of the T20I team. Batsman Azhar will captain the national outfit in the upcoming Tests against Australia as well as the World Test Championship in the 2019-20 season. Similarly, batsman Azam will lead Pakistan in T20 matches against Australia and until the 2020 T20 World Cup. The decision comes weeks after Pakistan — the top-ranked T20 team — were whitewashed by an inexperienced Sri Lanka side in Lahore. Media reports regarding Sarfaraz’s removal from the position of skipper have been circulating since Pakistan’s dismal performance in the World Cup earlier this year. Pakistan under Sarfaraz failed to make the knockout stage in this year’s 50-overs World Cup and languish at seventh in ICC Test Rankings. To add to his woes, wicketkeeper-batsman Sarfaraz has also been dropped from both the teams following a run of poor form in the two formats. “It has been a difficult decision to drop Sarfaraz Ahmed, who has performed well as a player and a leader,” PCB Chairman Ehsan Mani said in a statement. “But, his loss in form and confidence is visible and, in the best interest of the team, it has been decided to leave him out and provide him the opportunity to reflect and regroup himself and try to reclaim his form away from international cricket,” Mani added.

It is pertinent to mention that Pakistan’s head coach-cum-chief selector Misbahul Haq was also reportedly unhappy with Sarfaraz’s captaincy and had already communicated his reservations to the PCB. Misbah had made it clear to the PCB that Sarfaraz should not continue as the captain of the national team. But it is the decision to remove him from captaincy in the shortest format that will hurt Sarfaraz the most. Although they suffered an embarrassing 3-0 defeat at home earlier this month at the hands of a Sri Lanka side without a number of their top players, Sarfaraz’s captaincy has led Pakistan to be the leading national side in the world in the format. Results this year have been poor, but their run since the disastrous showing at the 2016 World T20 –– after which Sarfaraz took over –– had been outstanding. At the same time, Sarfaraz’s form has been poor across all formats. He hasn’t made a Test century in five years and in his most recent Test assignments in South Africa, he made three ducks in six innings. Since the day he scored an unbeaten 61 to get Pakistan through to the 2017 Champions Trophy semi-final, Sarfaraz has led Pakistan in 44 ODIs, averaging less than 29 –– and that includes 18 games in which he has not batted or finished unbeaten for under 15. In a further 12, he’s managed fewer than 15 runs, and scored just three fifties. His productivity in T20Is has been much the same post-captaincy. Sarfaraz said it had been an honour to lead Pakistan at the highest level “I want to thank all my colleagues, coaches and selectors who have helped me in this journey. My good wishes are with Azhar, Azam and the Pakistan cricket team, and I hope they will continue to grow stronger and stronger,” Sarfaraz was quoted as saying in a press statement issued by the PCB.

Azhar is not a surprising choice, given his status as the team’s most reliable Test batsman, although there had been talk about Shan Masood as a potential option. Azhar, who quit as Pakistan ODI captain in 2017, will begin his stint with a two-Test series in Australia later this year. Seventh-ranked Pakistan will play fifth-ranked Australia in two Tests in Brisbane (November 21-25) and Adelaide (November 29-December 3) before hosting Sri Lanka and Bangladesh for two Tests apiece. Pakistan are also scheduled to play three T20Is each against Australia (November 3, 5 and 8) and Bangladesh before the curtain falls on their international domestic season in early February 2020. “There is no bigger honour than to captain the Pakistan national cricket team in the pinnacle format of the game,” said Azhar who will have former team mate Misbah as the head coach and chief selector.

“These are exciting times in Pakistan cricket with a new team management. As a captain, I feel comfortable that there will be a number of knowledgeable people in the hut who I can rely for advice and guidance. I am not only targeting wins, but also aim to provide opportunities to players to grow in stature and express themselves so that Pakistan cricket can resume its journey to the top,” he added. Azhar has been a mainstay of Pakistan’s batting line-up since making his debut against Australia at Lord’s in 2010. The 34-year-old is regarded as Misbah and Younis Khan’s prodigy and has scored 5,669 runs with 15 centuries and 31 half-centuries in 73 Tests. In the ongoing four-day first-class Quaid-e-Azam Trophy, Azhar is the second most successful batsman with 388 runs in four matches as his side Central Punjab leads the field with two wins.

Azam, who is the number one batsman in the T20 format, declared that being named captain of the side was the biggest thing that had happened to his career to date. “I feel it has been a natural progression for me and I am delighted that the PCB has put faith in my capabilities. Sarfaraz has led the side in the shortest format by example and it is my responsibility to take forward his accomplishments so that we remain a consistent, attractive and powerful side,” he stated. Azam, the No.1 ranked batsman in T20Is, has previously captained Pakistan in the ICC Under-19 Cricket World Cup 2012. He was vice-captain in the recently-concluded series against Sri Lanka and is presently captaining Central Punjab in the ongoing National T20 Cup.