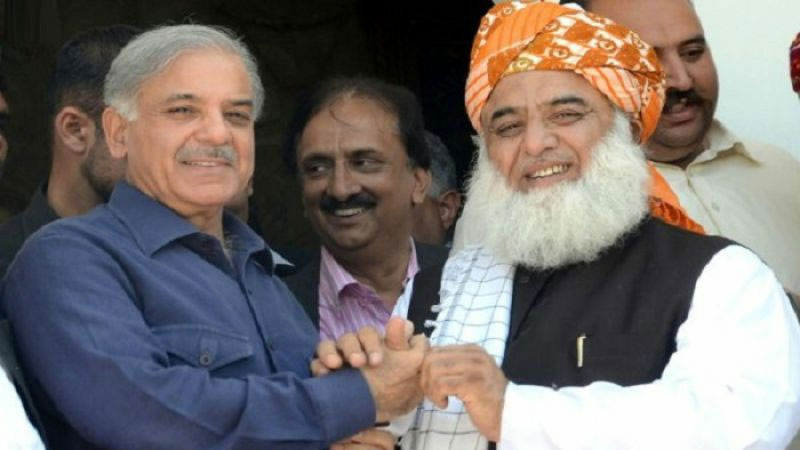 The narrative of Nawaz Sharif once again prevailed in the PML-N as party’s president and Opposition Leader in National Assembly Shehbaz Sharif Friday announced ‘full support’ to the Azadi March being held by JUI-F in Islamabad on October 31.

Addressing a joint press conference along with JUI-F chief Maulana Fazlur Rehman, the younger Sharif said they will expose the performance of the ‘selected’ government by holding a mammoth public gathering in the federal capital on October 31. “Imran Khan has miserably failed to deliver and therefore the whole nation from Karachi to Peshawar is committed to oust this government,” he told media in Model Town.

Earlier, a delegation of JUI-F led by Maulana Fazlur Rehman held a detailed meeting with PML-N President Shehbaz Sharif at his residence. Maulana Abdul Ghafoor Haideri and Senator Talha Mehmood of JUI-F and Ahsan Iqbal, Khurram Dastagir, Maryam Aurangzeb, Amir Muqam, Malik Pervaiz and Atta Ullah Tarar of PML-N were also present. According to Shehbaz, the PML-N has received guidelines from Nawaz Sharif regarding the march and his party will participate in the public gathering with ‘full preparation’. The PML-N will present its demands and the next line of action will also be announced in Islamabad, he added.

Shehbaz was of the view that despite the complete support of the institutions of the country, Imran Khan has miserably failed to deliver. “If any other government could have got such historic support from the institutions, Pakistan would have been on the path of progress,” he said. “This government must be ousted at the earliest and fresh elections should be called in the country,” he opined, adding that the PML-N will once again put the crippling economy back on the track in just six months if his party is given a chance through fresh elections.

Speaking on the occasion, Maulana Fazlur Rehman said the government is offering dialogue to him on one hand and also abusing the party leadership at the same time. “The criticism, verbal abuse and negotiations cannot go simultaneously,” he said, adding that the government must resign first to hold any negotiations. Fazl once again reiterated that the current government is ‘illegal, unconstitutional and incompetent’. He also paid his gratitude to Nawaz Sharif and Shehbaz Sharif for finally announcing the party’s support for the Azadi March. “The caravans of political workers will start leaving for Islamabad on October 27 from far-flung areas and people will enter the federal capital on October 31 in millions,” he said. The PML-N will participate in our march to further strengthen us, he concluded.