* Sirens blared across country at 3 pm; one minute silence observed
* Imran Khan says Modi is 'riding a tiger', finding no way to get off 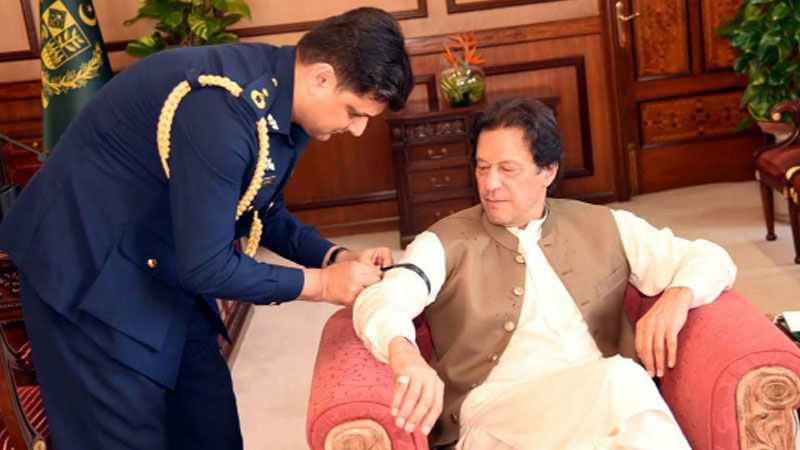 The prime minister tied the band on his right arm as a gesture of solidarity with eight million Kashmiris who are being denied basic human rights including access to food, medical and communication facilities. On the prime minister’s directives, the government officials and people from different walks of life also wore the similar black armbands to highlight the continued atrocities by Indian in the valley.

The prime minister in a tweet said Narendra Modi is ‘riding a tiger’, thus finding no way to get off, as he continues siege of Kashmiris with 900 thousand troops. Quoting a proverb ‘He who rides a tiger, is afraid to dismount’, the prime minister in a tweet on the 75th consecutive day of lockdown of Kashmir said Modi is fearful of a bloodbath after lifting of curfew. “As the world watches the worst violation of human rights in IOJK, Modi is now fearful, because he knows the moment the siege is lifted, there will be a bloodbath – which would be the only way to subdue the Kashmiri people,” said the prime minister. “Modi thought he could get his agenda of annexation by using 900k forces to silence Kashmiris, however, such a heavy deployment in IOJK, was meant to terrorize Kashmiris,” he said. “You don’t need 900k troops to fight terrorism; you need them to terrorize eight million Kashmiri people,” he said.

As per instructions of the prime minister, sirens were blared across the country at 3 pm where people assembled at their places and read the country’s national anthem as a symbol of unity for the Kashmir cause. As the sirens rang, Pakistanis stood up from their seats at offices, workplaces and homes, setting aside their all engagements to exhibit greater unity with Kashmiri brethren. One-minute silence was also observed. The activity ended with the playing of the national anthem. Pakistan has been holding regular protests and solidarity activities since India clamped curfew in occupied valley on August 5 this year, revoking articles 370 and 35-A and suspending special status of the Kashmir valley. A protest rally was also arranged in front of Parliament House to express solidarity with the Kashimris. The employees of the Senate and National Assembly enthusiastically participated in the rally.