* Mutt, Momo, Elle, Mother Dear and Father Dear are the lead characters of the novel which goes back and forth between the characters folding and unfolding their personalities 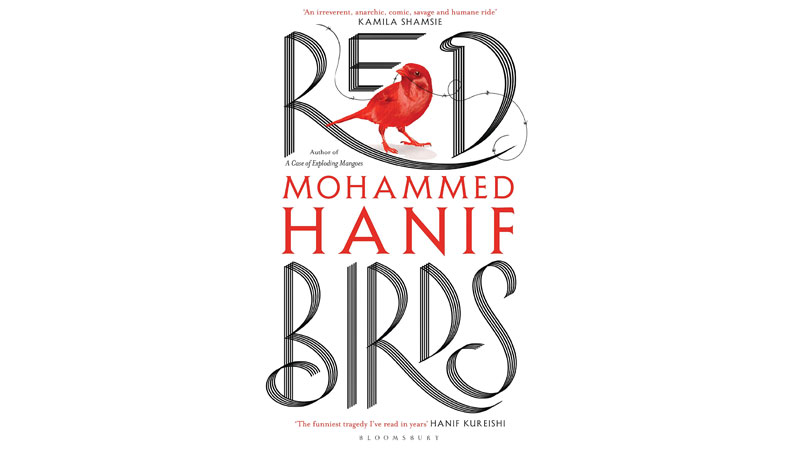 In the desert, unprepared for any situation that cannot be resolved with the After Eight mints in his survival kit.

Hallucinating palm trees and dehydrating is not Major Ellie’s idea of a good time, but he figures it’s less of a hassle than another marital spat back home. In a neighbouring refugee camp, Momo has his own problems; his money-making schemes aren’t working out as planned, his dog has ideas above his station and an academic researcher has shown up to study him for her thesis on the Teenage Muslim Mind. And then there’s the matter of his missing brother.

Mutt, Momo, Elle, Mother Dear and Father Dear are the lead characters of the novel which goes back and forth between the characters folding and unfolding their personalities!

Mohammad Hanif was born in Okara. He won many awards. His books The Case of Exploding Mangoes, Our Lady of Alice Bhatti and now Red Birds are remarkable pieces of fiction. Being a pilot, he has first-hand knowledge about planes and flying and perhaps this is where the inspiration is coming from!

Pakistani fiction changed its line of action after the 9/11 when the focus of the storylines shifted to conspiracy theories, migration, anti-migration, terrorism and so Mohsin Hamid came up with The Reluctant Fundamentalist just like other writers such as Kamila Shamsie with Burnt Shadows, Mohammad Hanif with the Red Birds and Hamid again with Exit West.

These novels concentrate on migration & the socio-political issues because of the people living on borders of the rich countries. These lead to homelessness and people being displaced because of wars, corrupt leaders as well as climate change such as global warming.

Pakistani fiction is not only indigenous anymore rather it has become international dealing with Spain, Japan, South America & Europe. Besides them there are young emerging writers who are showing a modern Pakistan whilst at the same time keeping the delicate balance of culture & local traditions.

Thus, in the world of post-colonial literature, Pakistani authours have globalized themselves shrouding in the English Language to be able to walk through the road to progress.

The concept of the modern/bold women emerged as the stereotypical image of the subservient and weak woman limited only to the domestic arena was overshadowed with the new progressive mindset!

These writers were in direct contact with the developed world and so were not slave to the patriarchal mindset. They were independent and intellectual women who strived to break the chain of imprisonment!

Red Birds by Mohammad Hanif, the author of The Case of Exploding Mangoes is a novel that speaks of the absurdity of war & impossibility of peace.

An American pilot lands in the desert. He is stranded in the midst of nowhere.

Panic shrouds him. That is when he remembers Desert Survival Rule No 1:t

‘Seen something nice? Forget it it’s a mirage.’

As Hanif explores the definition of home he says:

Home is something you will keep on going back to it & Hanif and Hanif beautifully captures the concept of ‘home’ through the parallel he makes and I quote:

‘Inside the cockpit looks familiar. It’s like being locked out of your own house.’

Coming to the differences between Father Dear and Mother and its cause is beacauseFather Dear sold Bro Ali and Mother Dear never forgave him for the act.The quote:

Thievery, robbery, murder are all these acts justified?

“When it comes to stealing they are artists”, speaks volumes about the act of thievery. Is it a physical act? Or a material act? Or is it an emotional or moral act? I am not going to spoil the suspense. So, read the book for yourself. Hanif points to another important fact. How to rid yourself of moral corruption? Education is the answer & I quote:

‘Education gonna solve all our problems.’

Mutt is a talking dog and Hanif is again revealing a significant fact how animals are more trustworthy and loyal than humans.

‘Mutt is dumb but reliable. He needs appreciation like we all do.’

‘Also, when you love someone you try to train them. The first step is you try to acclimatize them.’

First bro Ai disappears and now Mutt but Mutt always comes back. He is not a traitor.

“It was difficult to leave home but I decided to withdraw from the heartless household”, says Mutt.

Mutt is a sensitive and compassionate talking dog.

In a quickshift of scene Hanif is describing the aftermath of war!

‘But later after everything that could explode had exploded there would be calm.’

Mohammad Hanif was born in Okara. He won many awards. His books The Case of Exploding Mangoes, Our Lady of Alice Bhatti and now Red Birds are remarkable pieces of fiction. Being a pilot, he has first-hand knowledge about planes and flying and perhaps this is where the inspiration is coming from!

War may have left you physically & mentally impaired but more importantly it leaves a scar on your heart forever! A scar that cannot be erased. My rib hurt and I have a fractured bone but ‘What is really broken is my heart.’

“We used to have art for art’s sake. Now we have war for wars sake,” says Colonel Slatter.

“The desert fills the eyes. Your eyes become the desert…A bird. No, it isn’t a bird. You see a reflection the sand thinking it water you run toward it only to find out it is a mirage.”

Things appear and disappear in the desert and As I imagine Cath appear, suddenly she disappears! And I quote:

The undying love between a husband and a wife even after one spouse dies is eternal as when they return home they can see their partner resting on the sofa and watching tv! Now this is what you call a real mirage!

As Mother Dear in an argument with Father Dear says to quote:

“First they bomb our house, then they take way my son and now you are here to make us feel alright.”

Shifting the focus onto Major Ellie, he says:

“I am beyond fear.” He has been through such harsh circumstances that to imagine that something worse can happen is un-imaginable.

Going back to Mutt,

‘To smell is to survive’, says Mutt. When he can’t smell he feels he has lost his only talent.

As Mutt is traversing the desert he sees ‘red birds everywhere’ and it ‘worries’ him.

“I can usually smell the birds before I see them. Most birds smell like mischief…except crows who smell like other people’s dirty secrets them.”

“Red birds are real. The reason we don’t see them is because we don’t want to.Because if we see them we will remember.”

Hanif is trying to capture the poignancy of the situation. The red birds are symbolic of bloodshed and violence during war. The thousands of soldiers, women and children, brutally killed. The red birds stand for the oozing red blood of the martyrs in war.

“Desert forgave you. Sometimes desert forgives & makes friends. It’s immense but also lonely. It doesn’t always kill, sometimes it just makes someone lose his way because it needs some company.”

Women never lose their way in the desert perhaps because they have better navigation skills and they are not foolish to enter the desert without first mapping their route.

The above passage talks of the resilience and courage of these women who are physically and mentally stronger than men.

The focus shifts onto the Doctor in the Red Crescent Camp. The doctor will try to impreganate Mother Earth yet still rains don’t come perhaps more bombs. “But doctor can you hurry up and do what you are supposedto do. What are you saving those aspirins for?”

Another thematic concern of the novel is the progression from the past to the present and future. The past is gone. You live in the present, in the moment & you dream about the future.

“Closure means that after something bad has happened you accept that the thing had happened and you get on with your life.” A moment of comic relief comes when Hanif throws a political satire at the audience, making them squeal with laughter.

“If Pakistan screwed Afghanistan & USA was the midwife you’d get a country called family.”

“If I didn’t take out homes who would provide shelter. If I didn’t obliterate cities, how would you get to set up refugee camps? Where would all the worlds empathy go? Who would host exhibitions in the picture Galleries of Berlin. Who would have fund raising balls in London? Where would all the students in their gap years go? If I stop wearing the uniform and quit my job the worlds sympathy machine will grind to a halt. You don’t hold candle light vigils for those dying of old age and neglect. You need fire to ignite human imagination.” The above passage talks of how one thing leads to another. Everything happens for a purpose and to take the change in the stride is called evolution and progress!

Moving onto the spiritual aspect, Hanif points to how God is within us. We do not have to look here and there. He is present I our body, soul & mind.

“Look around he is here. Don’t look too hard. He is busy elsewhere.”

Mother Dear had dyed her hair red whilst Lady Flowerhead is dressed in grey. With the striking red it is difficult to blend in with the environment and the chances of survival become low. They are most likely to be bombed.

Relationships and friendships are important &Hanif brings out how essential it is to build relationships. It does not matter whether it is a local of foreigner you are in a relationship with what matters is that you respect each other’s culture, religion and belief of the person you are entering a relationship with. The novel discusses the theme of how you remember the past the most. Treasured memories or painful memories the past is grinded in our sub- conscious and that is what makes an authentic Individual.

“What are people if not the sum total of their memories?”

Whether Bro Ali returns or not is the million-dollar question! “He flutters his arms like an exhausted bird who has flown for days and is about to reach his destination.” Is he really the bird that takes flight and frees itself from the shackles of dictatorship?

Delve yourself in the novel to get answers to all your queries and questions! It’s a great book written with a unique stylistic technique.