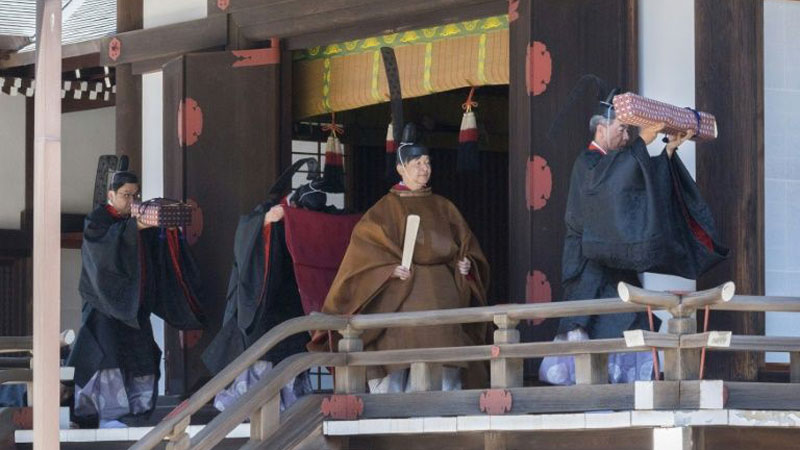 The ceremony proclaiming the enthronement of Japan’s Emperor Naruhito will be a tightly choreographed and solemn affair, steeped in tradition, that cements his ascension to the Chrysanthemum Throne.

Here are some details of the October 22 ceremony’s main elements:

After a private morning ceremony to “report” the day’s proceedings to his ancestors, Emperor Naruhito will prepare for the main event of the ceremony, in the Imperial Palace’s Pine Room.

The palace courtyard will be adorned with two rows of colourful banners under which will be lined up imperial guards, bearers of ceremonial objects, and gong and drum players.

Over two thousand guests will be present, most in seating around the courtyard that looks onto “Matsu-no-Ma” Pine Room, considered the palace’s most elegant hall.

Only a handful of people, including royalty and senior government officials, will be in the room itself.

The guests will have received strict guidelines on appropriate clothing for the event, including morning suit or formal kimono for men and dresses or kimonos for women.

The ceremony will start at 1:00 pm (0400 GMT) precisely, with the emperor entering the room from an adjacent hall, dressed in a brown-gold robe, along with attendants carrying the imperial regalia.

He will then literally ascend his throne, a tall black-and-gold octagonal structure with long purple curtains housing a simple chair, called the Takamikura.

Empress Masako will follow in a multi-layered robe that is so heavy it can be difficult to move, ascending her similarly elaborate throne, called the Michodai.

Once they are in place, the curtains will be ceremonially opened, revealing the royals inside.

No verbal instructions will be heard during the tightly choreographed ceremony, with only the sounds of drums and gongs signalling when movement will occur.

With the royals installed in their thrones, a drumbeat will give the signal for attendees, including envoys from more than 190 countries, to rise.

The emperor, also standing, will then make the official proclamation, likely to be along the lines of the declaration his father decades earlier: “I proclaim my enthronement to those at home and abroad.”

Prime Minister Shinzo Abe will then shout “banzai” (“long live the Emperor”) three times, raising his hands in salute with each exclamation.

Guests are expected to join the cheers but foreign invitees are not obliged, according to a government official.

The former emperor and empress will not be in the crowd, and nor will Naruhito and Masako’s only child 17-year-old Princess Aiko, because she is a minor.