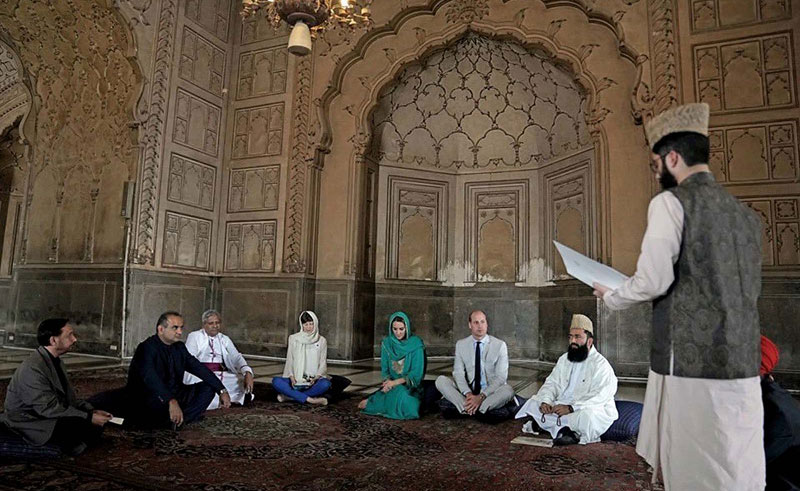 Duke and Duchess of Cambridge Prince William and Kate Middleton Thursday visited the Badshahi Masjid during their Lahore sojourn.

Badshahi Masjid Khateeb Maulana Abdul Khabeer Azad welcomed the royal guests upon their arrival and escorted them to different parts of the mosque. A 1800-foot-long red carpet was specially laid down to welcome the royal couple.

Art historian Faqir Syed Aizazuddin also accompanied the royal guests during their visit to the mosque and briefed them about the history of the grand building.

The chandeliers were lit up upon the arrival of Prince William and Kate Middleton, who visited different parts of the Mughal-era mosque and appreciated its architecture.

The Khateeb told Prince William about visits by his father Prince Charles (2006) and mother Princess Diana (1996) to the mosque. To which, the prince responded that his family has an old bond with the mosque and the Khabeer family.

Maulana Abdul Khabeer Azad presented the royal couple different gifts including a painting of the Badshahi Masjid, and traditional white shawls. Duchess of Cambridge Kate Middleton won the hearts of Muslims when she covered her head with the scarf in reverence to the Islamic culture and traditions.

Prince William also attended a meeting on interfaith harmony at the grand mosque, which was also attended by representatives of minorities including Pakistan Tehreek-e-Insaf (PTI) MNA Dr Ramesh Kumar, former MPA Ramesh Singh Arora and Bishop Sarfraz Peter. The meeting highlighted the importance of interfaith harmony in societies and the role of minorities in progress and development of the countries.

The Duke and Duchess of Cambrige Prince William and Kate Middleton appreciated the idea of interfaith harmony meeting at the grand mosque. From Badshahi Masjid, the royal couple left for Shaukat Khanum Memorial Cancer Hospital.

Later, the Duke and Duchess of Cambridge spent an activity-filled hour at the National Cricket Academy (NCA) on the invitation of Pakistan Cricket Board (PCB).

Prince William, who nurtures great love for cricket like the other royalty, played some cricket alongside his wife at the lawns of the NCA. National men and women cricketers including Azher Ali, Hassan Ali, Shaheen Shah Afridi, Sana Mir and Urooj Mumtaz took part in the match while some aspiring child cricketers were also present. National Bowling coach Waqar Younus performed umpiring duties. Prince William displayed his sporty side through excellent cricketing skills and hit Hasan Ali for a four and six during a short batting inning, while former Pakistan women cricket Captain Sana Mir bowled against Duchess of Cambridge Kate Middleton. Kate Middleton is an excellent hockey player who captained her high school hockey team.

Prince William chatted with cricketer Hassan Ali and others and discussed cricket at length. Duchess Kate Middleton also interacted with the women cricketers and impressed everyone with her qualities of head and heart. Prince William met child cricketers at the NCA, intermingled with them and spoke to them for quite some time.