Indian troops are in Kashmir to terrorize people, not to combat terrorism: PM Khan 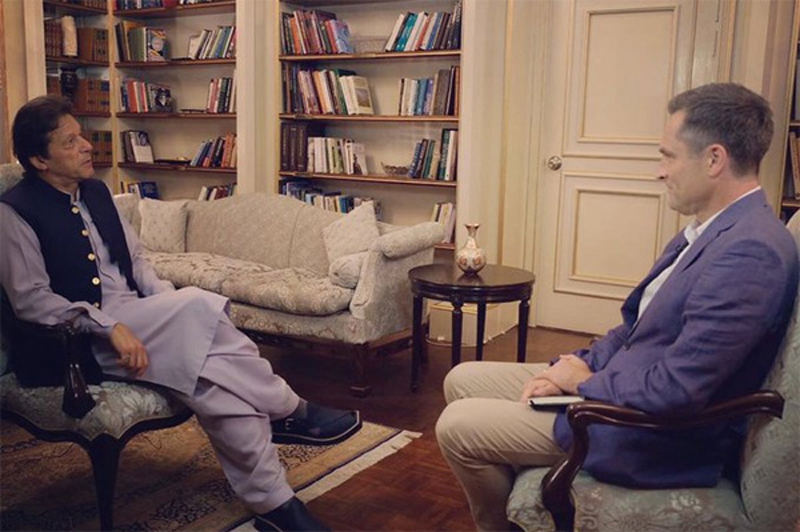 NEW YORK: India violated United Nations resolutions as well as bilateral agreements with Pakistan when it annexed occupied Kashmir more than two months ago and brought in thousands of additional Indian troops to clampdown on the disputed state, Prime Minister Imran Khan has said, and reiterated his call on the world body to intervene.

“These 900,000 troops are not there (occupied Kashmir) to stop terrorism; (they’re) there to terrorize the population,” he said while responding to questions during an exclusive interview with CNN on Tuesday, adding that this would have implications for Pakistan.

“That’s why we want the United Nations to act,” the prime minister told CNN’s correspondent Max Foster in Islamabad.

The people of Kashmir, he added, want to exercise their right of self-determination pledged to them by the United Nations.

Replying to a question, PM Khan said he had tried for one year to have talk with the Indian leadership until August 5 when New Delhi abolished the special status of Kashmir and put the disputed territory under lockdown and curfew with communications cut off.

Thousands of Kashmiris and their political leaders have remained under arrest since then.

“What’s the point in talking… where do you start talking now,” he added.
Asked about his efforts to ease tensions between Iran and Saudi Arabia, the prime minister said that US President Donald Trump had asked him to help defuse tensions by acting as a “go-between”.

“What I like about him is he does not believe in wars,” PM Khan said of the US President.

The prime minister met with Iranian President Hassan Rouhani in Tehran on Sunday, before traveling to Saudi Arabia on Tuesday, with the aim of facilitating talks between the two countries. He declined to give any details of his efforts, saying it was an “evolving situation.”

PM Khan said Trump had asked him last month to “try and be a go-between with Iran and the United States.”

The United States (US) blamed Iran for last month’s attacks on Saudi oil facilities and Trump imposed new sanctions on Tehran, two pillars of the Iranian economy — the country’s central bank and its sovereign wealth fund.

But Iran has categorically denied any responsibility. Yemen-based Houthi rebels, locked in an ongoing war for control of the country with Saudi Arabia and its allies, have said they are behind the attack.

US officials have refused to accept that claim, though they have not yet presented evidence that implicates Iran.

Meanwhile, the US has promised to send 1,800 more troops to Saudi Arabia to ensure its security.

In the interview with CNN, he said PM Khan warned against ratcheting up conflict between Saudi Arabia and Iran.

“If Saudi Arabia and Iran went to war, this would be a disaster,” he said.

He added that a priority in his discussions with the leaders of both countries was to create a ceasefire in Yemen.

PM Khan also discussed the current turmoil in Syria, where Turkey began an operation last week aimed at eliminating what Ankara calls a `terror corridor’ on its border.

The abrupt US repositioning of troops from the area has left Syrian Kurdish leaders looking for support from Syria’s government and from Russia, and drawn scathing criticism from US officials and military personnel.

“I agree that there should be the best effort to leave in an orderly fashion. But will there ever be a best way to leave, end a war? That’s why I don’t believe in starting wars,” PM Khan said.