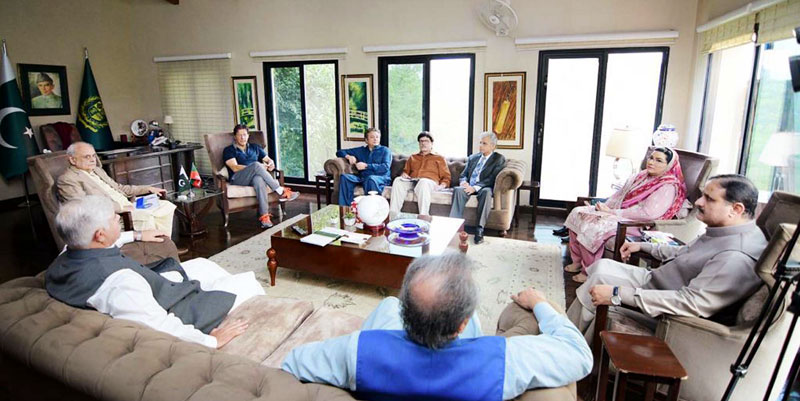 “We are a political party and fully capable and willing to deliver a political solution to the political matters,” Foreign Minister Shah Mahmood Qureshi told a press conference in Islamabad following a meeting of the PTI’s core committee, chaired by Prime Minister Imran Khan. He said a small political committee has been set up to get in touch with Maulana Fazlur Rehman. The four-member committee will be headed by Defence Minister Pervez Khattak, with party representatives from all four provinces its members.

“If anything the JUI-F chief says during the resultant talks has political weight, we are ready to listen to it and if a reasonable solution emerges, we will accord that priority,” the foreign minister said. He reiterated that a political solution to the conflict must be sought, explaining that Pakistan is currently fighting for the Kashmir cause on international forums and a unified stance must be presented in this regard.

The foreign minister, however, clarified that the government’s offer of dialogue was not out of any fear or pressure. “It is not that we have any fear, I must lay stress on this,” he said. “If someone thinks that with a dharna, governments can be sent packing then we have a 126-day experience in this […] we are not novices in the matter,” he said.

Qureshi said the government has decided in favour of political engagement while keeping some important factors in view. “October 27 is that despicable day on which Indian forces landed in Srinagar and captured Kashmir,” he said, highlighting the solemnity that must be accorded to the day. He said the government’s Kashmir Cell has, therefore, decided to observe the day with due respect and in solidarity with Kashmiris. “So we have to see whether we harm this larger purpose in pursuit of a narrower, local agenda,” he said. Qureshi said the other consideration is that the government has just surmounted a great economic challenge over the past 13 months and brought Pakistan back to stability. “When our government took over the helm of affairs, all the macroeconomic indicators were painting a very dire picture, whether it is the fiscal deficit, the current account deficit, the trade deficit, the investment levels, the unemployment figures, exports, imports, or debt servicing capabilities,” he said. “So just now we have begun to witness an economic turnaround, and at this time if there is even a hint of instability, it will adversely affect our economy,” he added.