NAB gets EBM’s approval to file reference against Anwar Majeed 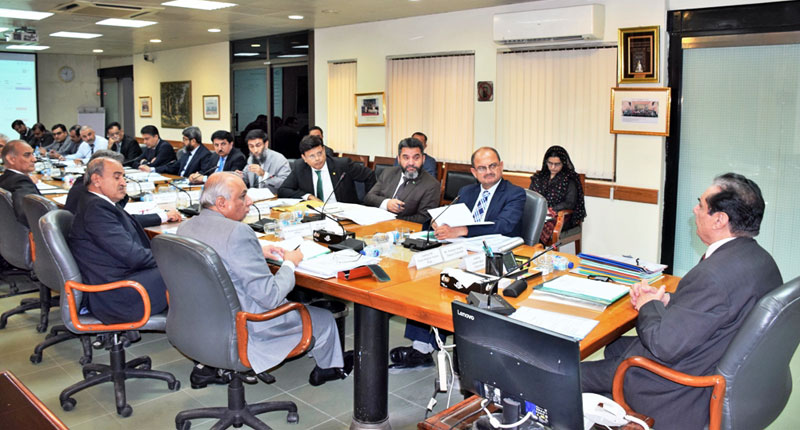 A meeting of the Executive Board of the National Accountability Bureau (NAB) chaired by Justice Javed Iqbal was held at the NAB headquarters, Islamabad.

It is a yearlong policy of the bureau to share the details of Executive Board Meeting (EBM) with the public. It does not target or hurt anyone. All Inquiries, Investigations initiated against suspects are not final as NAB only proceeds ahead against any suspect after knowing the side of the story of the suspects.

The EBM accorded approval to filing of three references. First reference would be filed against Khawaja Anwar Majeed and others. They were accused of allegedly involved in money laundering and corruption, causing losses of Rs 340 million to national exchequer.

Another reference will be filed against Syed Arif Khan, director and partner of Messers Kanal View and others for looting the people causing Rs 266 million losses to national exchequer. They have been accused of having assets beyond known sources of income.

The EBM accorded approval of conducting investigations against Nasar Ahmed Afzal, Sagheer Ahmed Afzal and others. In total the EBM approved conducting three inquiries including against officers and officials of Excise and Taxation department, owners, management and others of

The EBM accorded approval of attaching the inquiries against the officers, officials and management of Punjab Energy Holding company, Limited with the ongoing inquiry against appointment of officers in 56 companies. The EBM also approved referring the inquiry against Fazal Amin, Siraj Din and others to Anti-Narcotics Force. The same forum also okayed closing of inquiry against Saeed Ahmed Khan , Chairman OGRA and others , Abdul Wali Khan University Mardan due to lack of evidence.

The EBM authorized closing inquiries against officers/officials and others of Abdul Wali Khan University, INGOs including SDPI, FAFEN, FAO Rural Programme and others owing to absence of evidence.

He said World Economic Forum in its recent report has lauded NAB’s awareness, prevention and enforcement policy which is honour for the bureau.

Chairman said that the bureau was striving to recover the amount looted in Muzarba and Musharka scandals. As many as 44 suspects of the scam have so far been apprehended. He urged the concerned departments to strictly the mushroom growth of illegal housing societies. He urged the electronic and print media to check legality of housing society before launching its advertisement campaign as some housing societies allegedly exist only in papers and started workings without approval of regulator and involved on looting the public.

He urged regulators including LDA, CDA, RDA, BDA, PDA, MDA, ICT and Gwadar Development Authority and others to enlist approved housing societies at their websites and inform the people about illegal housing societies to save them from looting.