Talash could be the first feature film on malnutrition: Zeeshan Khan

* ‘I was closely affiliated with one of the biggest media houses in Pakistan,’ the director says 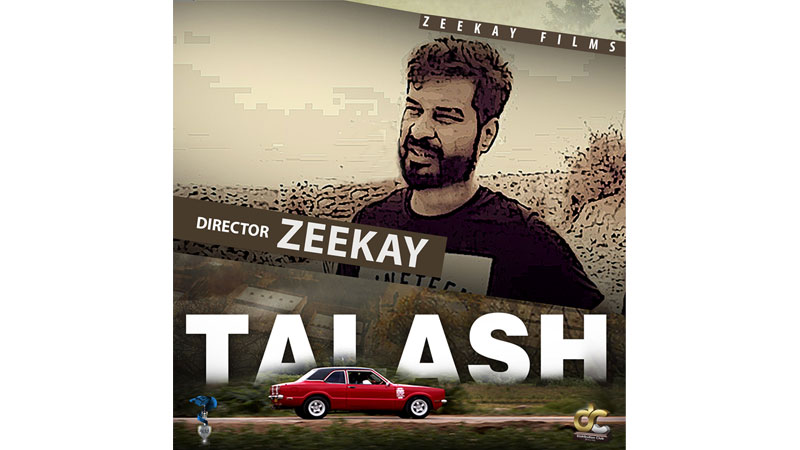 Director Zeeshan Khan, best known as Zeekay is ready for his big break as a director, this time for producing his debut feature film ‘Talash’, Pakistan’s first on malnutrition. In an exclusive interview, he talked about the film’s subject and his motivation behind it.

Tell us more about your production house Zeekay Films.

I was closely affiliated with one of the biggest media houses in Pakistan. I witnessed the growth of the satellite television industry for nearly a decade. Soon the idea of launching ZEEKAY FILMS with a few of my friends transpired. Our core strength is to translate research into content and so far, we have found success with it.

Your upcoming feature film ‘Talash’ is Pakistan’s first about malnutrition. Why have you specifically chosen this topic?

We were doing an awareness campaign with the health departments of Sindh and Balochistan on malnutrition for the years 2017 and 2018. Many international agencies and official figures found in Multi Indicator Cluster Survey of 2014 and the National Nutrition Survey of 2011 gathered extensive research on the topic. We realized that every second a child in Pakistan is malnourished. Further research also suggested that nearly 63% of our children have iron deficiency. These figures are alarming, to say the least. The statistics include the metropolitan, cosmopolitan and urban centres combined. We met with couples, families, healthcare providers and our elders and discovered that malnutrition is one of the greatest challenges we are facing today. Malnutrition is our unforeseen enemy, leading to a loss of billions of dollars in terms of human resources. For this reason, the topic caught our attention. There is a strong misconception that malnourishment is the direct result of droughts. It is simply untrue! Malnutrition is the misuse and absence of nutrition bestowed to us by Almighty Allah. What will our future hold if each child experiences stunted growth? Hence, we decided to take an initiative through film.

Do you feel the audience may not respond so well to a serious film subject considering their stronger inclination towards the dramedy genre?

Talash has a strong message to convey to the audience, that too along the lines of entertainment. It has all the essentials a film should have; romance, drama, tragedy and comedy. It is a commercial project. The movie also depicts a love triangle among medical college graduates.

‘We were doing an awareness campaign with the health departments of Sindh and Balochistan on malnutrition for the years 2017 and 2018. Many international agencies and official figures found in Multi Indicator Cluster Survey of 2014 and the National Nutrition Survey of 2011 gathered extensive research on the topic’

In what ways will ‘Talash’ mould our perception about filmmaking?

Talash is a mere starting point of what our films are capable of achieving for the society. We have the same kind of audience in theatres that watches television and listens to radio. We have previously produced drama serials on social issues and millions have responded well to them. The movie takes a new line of approach for our cinema. We, as filmmakers can contribute to our society by producing engaging films, not limited to what we have already seen in the recent past. Movies such as Khuda Kay Liye and Bol did well for our cinema so we must produce similar feature films without compromising on entertainment value.

Which part of the film was daunting to shoot?

The car chase sequence with a crashed camera was quite frightening to capture. I, on behalf of my team members can attest that we may be the first ones to record a scene with a crashed camera. In the trailer, we see are furbished 1971 Ford chasing a Toyota Tundra. This sequence caught us all off guard because the rigs required for the sequence were not available in Pakistan. Our actors also chose to do the stunt sequence themselves. Our cinematographer Ghayasuddin Siddiqui had risked his life on the main highways by holding the camera himself to capture some thrilling shots. We experienced ordeals during the shoot but the whole crew was incredibly motivated.

Is the movie created in a manner that subliminally helps the viewers understand better the subject for what it is?

I hope so! We tried to cover each area, from start until the finish. We base our film on preventive strategies, not the problem itself. Malnutrition and stunted growth are irreversible. If a child falls victim to either, it will sadly be a part of his or her life forever.

What other aspects have you probed?

After a long time, the viewers will get to see the landscape of Sindh. We have watched many movies produced in Punjab or the northern areas of Pakistan but we have gone out of our way to shoot in Sindh. The film shall also debunk a false myth that Sindh is not as lush as other parts of our country.

What makes ‘Talash’ so unique?

It is one of a kind feature film. We cannot compare it with other movies around the world. If you search formal nutrition, you will not find many documentaries, shorts or even full-length feature films on the subject. It could very much be the first one to emerge from our film industry. ‘Talash’ is special because it is Pakistan’s contribution to the world. We will send across a global message to a common problem.