* FO says Imran will confer with Saudi leadership in light of his talks during recent Iran visit
* PM admits relations between US and Iran are more complicated, but sounds optimistic about improvement in ties 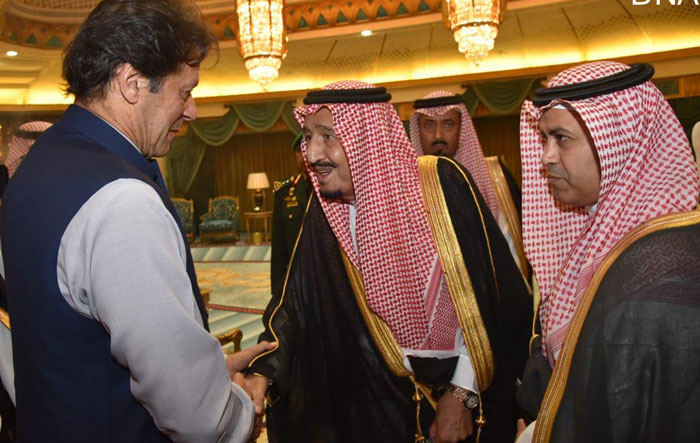 The two leaders discussed the ways and means to further strengthen bilateral cooperation. Prime Minister Khan stressed on the need to resolve differences and conflicts through political and diplomatic means for the sake of peace and stability in the region. He also briefed the Saudi King about the latest situation in Indian-held Jammu and Kashmir.

According to a Foreign Office statement, the prime minister will confer with the Saudi leadership in light of his recent consultations with Iranian leaders in his recent visit on October 13. “Bilateral ties and other regional developments would also form part of the discussions,” the statement mentioned.

The Foreign Office said Pakistan and Saudi Arabia are bound in a fraternal relationship, marked by mutual trust and understanding, close cooperation, and an abiding tradition of supporting each other. This is Prime Minister Imran Khan’s third visit to Saudi Arabia this year. His earlier visits were in May and September 2019.

Earlier, Special Assistant to the Prime Minister on Information and Broadcasting Dr Firdous Ashiq Awan said Prime Minister Imran Khan has embarked on a visit to Saudi Arabia for promoting peace and security in the region.

In a tweet, she said the prime minister is emerging as an advocate for unity and solidarity in the Islamic Ummah and for reconciliation among the Muslims. Talks will be held with the Saudi leadership on matters of mutual interest and regional and international situation, she said, adding Pakistan has cordial religious, cultural and historical ties with Saudi Arabia. The special assistant said the bilateral relations based on mutual trust and brotherhood were further strengthened with the visit of Crown Prince Mohammed Bin Salman to Pakistan.

Pakistan and Saudi Arabia have always supported each other in their hour of need, she added.

Meanwhile, in a brief interview with CNN’s programme hosted by Becky Anderson on Tuesday night, Prime Minister Imran Khan sounded his optimism about possible improvements in the US-Iran ties which have been currently at the lowest ebb after President Donald Trump announced withdrawal from the Joint Comprehensive Plan of Action (JCPOA), also known as the Iran nuclear deal followed by imposition of pressing sanctions. The prime minister said during his visit to New York, the US president asked him that he (the PM) should try and go between Iran and the United States. During his recent visit to Iran, he also spoke to Iranian President Hassan Rouhani about the US offer, he added.

The prime minister, to a question, replied that the situation is evolving and that he will not go into details. “Let’s see … it gets anywhere.” he said, adding, “I did not go into too much detail, until there is response from both sides.” He also admitted that the relations between the two countries were more complicated.

To another query, he expressed his optimism that there is realization on both sides.

About the US president, the prime minister said the people criticise him often but “I think, what I like in him that he does not believe in wars.”