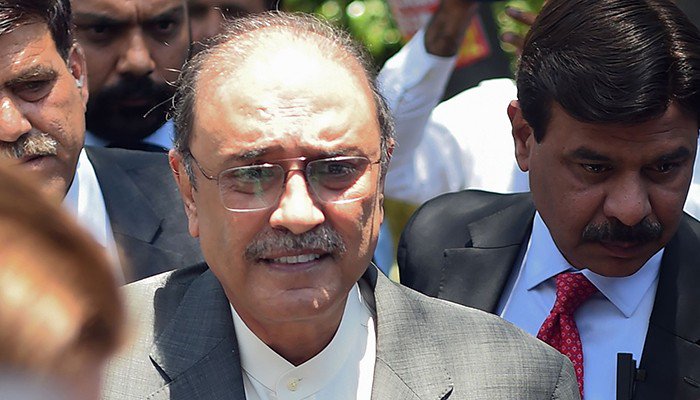 An accountability court in Islamabad on Tuesday rejected a petition filed by former president Asif Ali Zardari, who has been put in jail on judicial remand, seeking his shifting to a hospital for medical care.

The court remarked that the court doesn’t have jurisdiction over the matter, and that it should be referred to the relevant forum.

A day earlier, Judge Muhammad Bashir had reserved the verdict on the application after hearing arguments from Zardari’s advocate Latif Khosa. Khosa had argued before the court that his client’s life was in danger and it was his constitutional right to avail medical facilities in the jail.

Meanwhile, the National Accountability Bureau (NAB) informed the accountability court on Tuesday that a co-accused in Park Lane reference against former president Asif Ali Zardari has decided to become approver in the case.

The NAB produced Javed Hussain, a former executive director of the Securities and Exchange Commission of Pakistan (SECP) and a co-accused in the Park Lane reference, before the accountability court. The NAB prosecutor informed Judge Mohammad Bashir about the new development in the case and said that the case of the accused has been sent to the NAB Headquarters.

The NAB also requested to the court for physical remand of the accused.

Separately, the NAB Lahore has submitted an investigation report of accused Shoaib Qamar, who allegedly laundered money for the Shehbaz Sharif’s family.

NAB Lahore is investigating money laundering case against the Sharif family. Qamar was also arrested by the NAB in the same case and is being held on physical remand.

According to NAB, Shoaib has made several important revelations during the investigation. The accused used to withdraw Rs15-20 million a month from Good Nature Trading Company. The money withdrawn was given to Hamza Shahbaz, Salman Shahbaz, Nusrat Shahbaz and others. These funds were also used to meet the kitchenette needs of Model Town residence. During the probe, the accused also revealed about another Benami company, Nisar Trading.

Also in Lahore, a combined investigation team of NAB on Tuesday interrogated former prime minister Nawaz Sharif in Chaudhry Sugar Mills case. The investigators questioned Nawaz about alleged money laundering of Rs 410 million through the partnership of Yousuf Abbas and Maryam Nawaz. To this, Sharif replied that they should table the questions to the persons concerned as business is not an illegal thing. When questioned for the transfer of shares worth Rs11 million to a foreigner, Naseer Abdullah, by the accused persons, he said the family had business connections with the person.

A question was tabled before the former prime minister regarding the sources of loan worth $15.52 million that had been acquired for the Chaudhry Sugar Mills. Sharif refused to answer it too, saying that he is unaware of the details as the record of the loan is not present with him.

Meanwhile, an accountability court on Tuesday extended physical remand of PPP senior politician Khursheed Shah till October 21 in a case related to owning assets beyond means. The NAB officials produced Shah before the court and sought an extension in his physical remand.