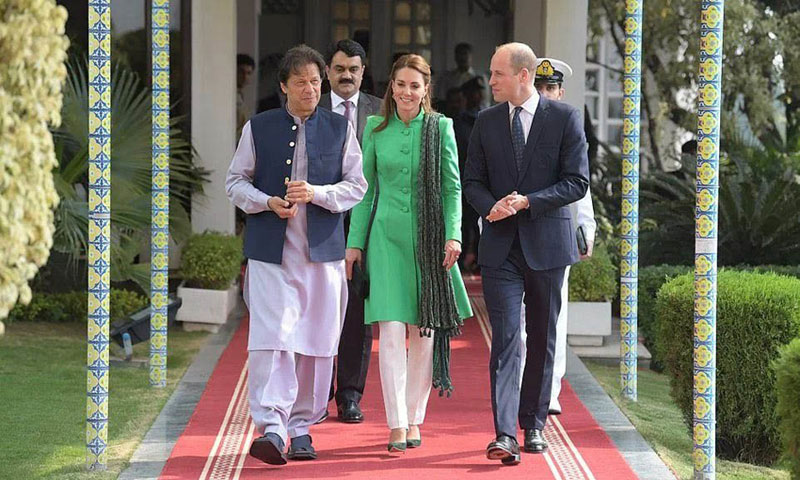 Prime Minister Imran Khan Tuesday commended the visiting Duke and the Duchess of Cambridge for promoting positive activities in Pakistan as he mentioned their efforts on raising worldwide awareness on climate change, inequality and education.

The prime minister, in a meeting with Prince William and Kate Middleton here at the Prime Minister House, appreciated the royal couple for holding interaction with young Pakistanis, including schoolchildren. The meeting that lasted for half an hour was held in a warm and cordial atmosphere.

Prime Minister Imran Khan recalled the love and affection among the people of Pakistan for Prince William’s late mother Princess Diana because of her compassion and support for the charitable causes. He updated the royal couple of Pakistan’s domestic priorities and also international perspective, particularly the relations with India post August 5, and the support for peace and reconciliation in Afghanistan.

The Duke of Cambridge termed Pakistan a very important country for the United Kingdom. He thanked the government of Pakistan for the warm welcome and hospitality extended to them and their entourage.

The prime minister later hosted a luncheon for the Duke and the Duchess.

Earlier on their arrival at the Prime Minister House, the prime minister received Prince William and Kate Middleton at the main entrance. Around 30 representatives from British media outlets, also part of the royal entourage, were given an opportunity to cover the arrival and departure of the Duke and the Duchess.

Duchess Kate Middleton exuded elegance wearing a green sherwani-collar style long shirt, paired with white trousers and a traditional printed stole with dangling tassels. The choice of her dress, that matched the bi-colour Pakistani flag, was in particular admired by the mainstream national media as a gesture of respect for the host country.

Earlier, the Duke and Duchess of Cambridge began a series of formal meetings Tuesday with a call on President Dr Arif Alvi and Begum Samina Alvi, where they discussed climate change and measures to alleviate poverty.

Accompanied by British High Commissioner to Pakistan Thomas Drew and other staff members, the president commended the visiting dignitaries for their endeavors to raise awareness about mental health, climate change, and poverty alleviation.

A statement from the President House said the Duke of Cambridge thanked the president for the warm welcome and hospitality extended to him and his entourage. The royal couple appreciated the initiatives undertaken by the government of Pakistan to combat climate change and alleviate poverty.

The Duke and Duchess of Cambridge also visited a school for girls to witness how a UK project was helping to get teachers into the poorest schools.

Kate Middleton donning a royal blue classic kurrta with trousers and dupatta, designed by Pakistani designer Maheen Khan, arrived at the school along with William in a more casual look wearing trousers and shirt was received by cheering kids. The royals shook hands and talked with the beaming kids at the entrance. The model school – a public sector entity – established in 1978 caters to students between the ages of 4 to 18, under the ‘Teach for Pakistan’ programme based on the United Kingdom’s ‘Teach First Scheme’.

The royal couple, on reaching the school, shared smiles with the kids and highlighted the importance of girls’ education, besides expressing satisfaction over the ‘Teach for Pakistan’ scheme which helps disadvantaged kids.

The next stop for Kate and William was at the Margalla Hills National Park (MHNP), Trail 5, where they had a stroll, set a Leopard trap and took part in activities with local school kids.

The visit was aimed at encouraging local school children learn about conservation and pollution at the National Park.