President Recep Tayyip Erdogan’s military offensive, dubbed the Operation Peace Spring, in the northeastern Syria against the Kurdish-led Syrian Democratic Forces (SDF) has been continuing in full swing. The YPG-an extension of a US and Turkey-designated terror group, PKK-was rebranded as the SDFin 2015 by the US in northern Syria. The US trained, armed and equipped the SDF to fight Daesh. 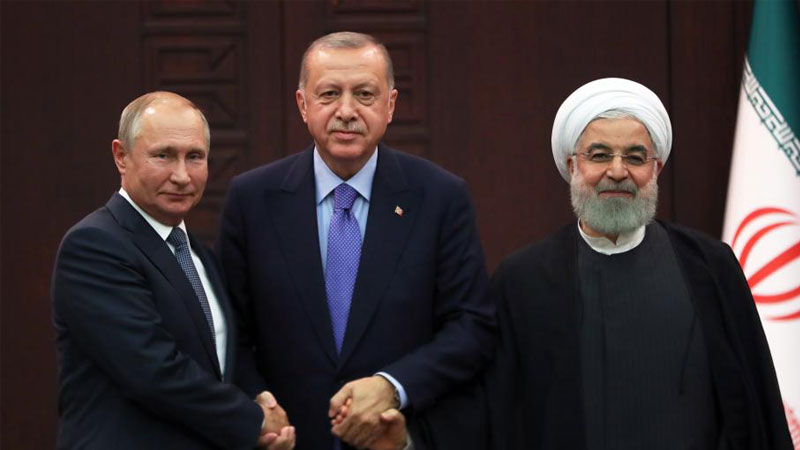 The Turkish-backed Syrian National Army rebels have been able to drive out the YPG militants from Ras al Ain and Al-Abyad, two Syrian border towns of extreme strategic importance. Turkish-allied forces have also taken control of the M4 highway, a major supply route for the SDF, stretching across the northern Syria.

Turkey claimed to have killed, captured or wounded more than five hundred SDF militants. Eighteen civilians and a Turkish soldier have also been killed in the border towns of Turkey by SDF mortar shelling. The SDF says it has lost hundred and four fighters. During the last five days, Kurdish-lead SDF has been able to target the border towns of Turkey with mortar shells, but the victory of Turkish-allied forces in Ras al Ain and Tal Abyad would hamper SDF militants’ ability to attack Turkish border towns.

As declared by President Erdogan at the beginning, the objectives of the Operation Peace Spring include: a) driving the YPG terrorists out from the Turkish border; b) creating a safe zone, thirty to thirty-five kilometres deep inside Syria; c) relocating the 3.5 million Syrian refugees currently in Turkey to a safe zone; d) altering the demographic balance in northern Syria to what it was during the times of pre-civil war Syria. The move will effectively create a buffer between the YPG and Turkey.

Despite strong criticism around the world over the current Turkish incursion, most of the countries including the US, Russia, Iran and Pakistan have termed the Turkish security concerns as legitimate. Turkey, like any other state, has every right to secure herself from terrorists who have thrived on the geopolitical situation of the region.

The YPG is no doubt an extension to PKK-a terrorist group that has mercilessly killed over forty thousand innocent civilians during the past four decades in Turkey. The SDF, during the Syrian civil war, with the US military and financial support, was able to change the demographic balance in northern Syrian to its favour. Hundreds of thousands of militants around the world were relocated near the Turkish border in northeastern Syria in a bid to create an autonomous Kurdish region.

Turkey, Iran, Iraq and Syria oppose Kurdish statehood or autonomy since it could flame the Kurdish separatist tendencies, endangering the territorial integrity of the aforementioned countries. Therefore, Turkey’s current operation against the SDF is also significant for Iran, Iraq and Syria.

Turkey, Iran and Russia have worked hard to bring relative stability to Syria. The troika is the main guarantor to the Astana Peace Process to end the Syrian civil war

President Erdogan launched the Operation Euphrates Shield in 2016 and the Operation Olive Branch in 2018 in northern Syria to remove national security threat to Turkey posed by the YPG. President Trump announced in December2018 to withdraw US troops from northern Syria declaring Daesh’s defeat. Turkey then wowed to act against terrorists after the US withdrawal. However, despite his announcement, domestic pressure didn’t allow Trump to pullback US troops. On October 9, Trump announced US withdrawal from northern Syria after a long telephonic conversation with President Erdogan.

President Erdogan embarked upon the Operation Peace Spring as fifty US troops embedded with the SDF were pulled back from northern Syria. The Kurdish-lead SDF called the US withdrawal a betrayal and backstabbing.

President Erdogan, talking to media on Sunday, has also wowed to expand the operation by taking control from Al-Hassakah to Kobane in northern Syria. The SDF with Russian mediation has struck a deal with the Syrian government that has moved its forces to the northern fronts in a bid to stop Turkish incursion. The Syrian government initially blamed the SDF of betrayal and conspiring against the country with foreign forces for autonomy but now has vowed “to confront Turkish aggression.” Iran and Russia have already offered to mediate between the Kurds, Turkey and Syria. Both countries must intervene to prevent a clash between Turkish-backed forces and the Syrian army in Manbij and Kobane.

The Kurdish administration claimed that around eight hundred Daesh terrorists in its custody have escaped from jail due to the Turkish attack. Kurds have also said that guarding the prisons was no longer a priority. Turkey called it a false propaganda to terrify the US and the west. Many in the west and the US are apprehensive of Daesh’s resurgence. Former US Secretary of Defence James Mattes has also suggested that Daeshhas not been finished, and the US should keep exerting the pressure.

Although Turkey has vowed to take responsibility of some twelve thousand Daesh fighters present in SDF jails in northern Syria, prolonged instability in northern Syria could allow Daesh to resurge. Daesh have claimed recent car bombings and declared a new campaign in Syria. Acting US Defence Secretary Mark Esper has announced pullout of a thousand US troops from northern Syria, allowing vacuum to be created for non-state actors. Turkey, Iran and Russia with consensus must act to fulfil the vacuum left by the US.

Trump has also authorised the US treasury to sanction Turkey. So in the coming days, sanctions could be imposed on Turkey.

Turkey, Iran and Russia have worked hard to bring relative stability to Syria. The troika is the main guarantor to the Astana Peace Process to end the Syrian civil war. Under the Astana process, more than thirteen rounds of talks have taken place. The presidents of the three countries have met several times, and have vowed to work together to find a political solution to the Syrian issue. Turkey’s Operation Peace Spring must be within the framework agreed by the three countries. Any disagreement between Turkey, Iran and Syrian would benefit the anarchist and chaotic forces.

For Turkey’s own sake, a limited operation in northeastern Syria to address its legitimate security concerns should be the top priority of President Erdogan. Getting embroiled in the Syrian civil war could destabilise Turkey and slowdown its economic progress. The sooner Turkey disembarks from Syria, the better it would be for Turkey’s stability, progress and prosperity.