* These days, the director and his wife, Tasmina Sheikh who has produced the film and other previous projects under the banner of Elysèe Productions, are in Karachi for two purposes 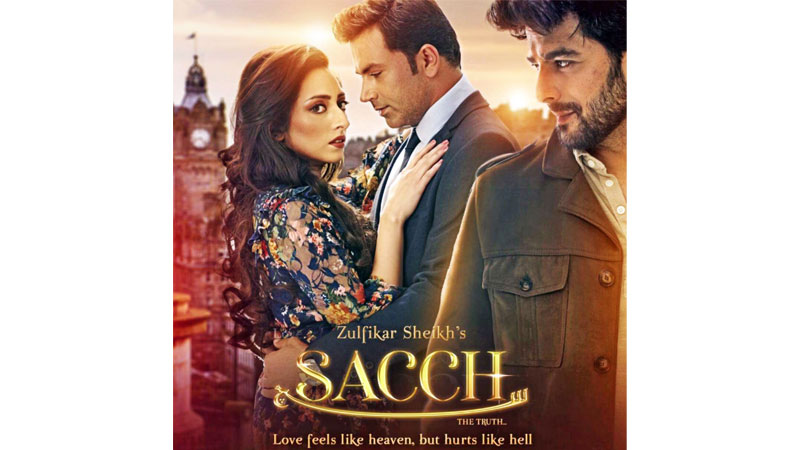 On Saturday, director and actor Zulfikar Sheikh unveiled the bright and catchy poster for his film ‘Sacch’ which will have its worldwide release on December 20, 2019.

Designed by Salman Tehzeeb, the poster is visually appealing, having a rose gold hue as its theme colour. Interestingly, the poster does not shy away from revealing the basic plot of the film. Having Asad Zaman Khan, Elysèe Sheikh and Humayun Ashraf in it, it suggests from the former two being in each other’s arms that they will be the lovers while Humayun Ashraf, with his dishevelled hair and unshaved face will be the villain. This is also quite evident from the fearful look which Sheikh has in her eyes while looking askance at Ashraf. From all of this, we get the idea that “Sacch” will incorporate a love triangle, the characters in the triangle performed by Elysèe Sheikh, Asad Zaman Khan and Humayun Ashraf with Uzma Gillani, Ayesha Sana, Javed Sheikh, Fazila Qazi, Noman Masood and many other senior actors in the roles of the young characters’ guardians. How the creative writer Haseena Moin and the veteran director Zulfikar Sheikh have beautified a story based on a love triangle is what keeps us curious.

These days, the director and his wife, Tasmina Sheikh who has produced the film and other previous projects under the banner of Elysèe Productions, are in Karachi for two purposes. One is that the work on the film’s dubbing and background music is being done in Karachi and the other is that on the 18th of October, the theatrical trailer of the film will be launched.

The director has announced that both the red carpet and the launching ceremony of the film’s theatrical trailer will take place on the mentioned date at 6pm at Nueplex Cinemas standing in DHA, Karachi and that it is going to be a star-studded event. He also says that the promotions for the film will also be held in Lahore which is certainly going to be a treat for those fans of the star couple who reside in the city.

Zulfikar and Tasmina are also being seen these days on the morning show sets of various Pakistani channels where they are asked about their film, their recent appearance being in Faisal Qureshi’s “Salam Zindagi” that runs on ARY Zindagi. It was also suggested in the episode that there should be more and more affordable cinemas in the country so that people from all kinds of backgrounds may have exposure to entertainment.

It is still hoped that Pakistanis will try their best to visit the cinemas in order to watch “Sacch” because it is in the medium of film that the husband and wife have made their début. Otherwise, they have been in the hearts of Pakistanis ever-since they started producing high-quality serials for PTV.

This time too, we have high hopes and we wish the creative family best of luck.

The writer is a freelance journalist and can be reached at m.ali_aquarius85@yahoo.com. He Tweets at @Muhamma40297238