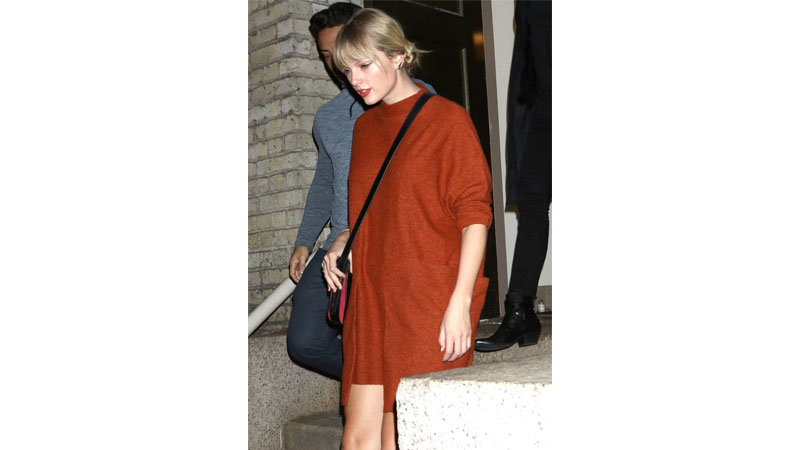 Swift even took to her Instagram Stories to commemorate the special occasion, writing, “Thank you @Madonna for an outstanding show #MadameXTheatre. Shout out to the phenomenal dancers, singers, musicians, set designers, crew wardrobe, glam, and M who gave it EVERYTHING.” The 29-year-old singer could be seen pouting her lips for the photo, rocking a bold red lip, with Porowski and other friends-including Ashley Avignone-also pictured in her selfie.

“She looked happy and excited to be there,” the insider said. “Fans were calling out to Taylor, but she was focused on the stage, clapping and dancing along.” Back in 2015, Swift and Madonna stole the show when the two pop icons performed a surprise duet at the iHeartRadio awards.

The two hit the stage to perform Madonna’s “Ghosttown.”

A source told E! at the time that their friendship began awhile back after Madonna applauded Swift’s songwriting skills in interviews. Swift has also previously expressed how much she looks up to the 61-year-old singer.

“One element of Madonna’s career that really takes center stage is how many times she’s reinvented herself,” Swift has previously told Billboard of Madonna. “It’s easier to stay in one look, one comfort zone, one musical style. It’s inspiring to see someone whose only predictable quality is being unpredictable.”

As far as her friendship with the Queer Eye star goes, Porowski made a cameo in the Grammy winner’s latest “You Need to Calm Down” music video. At the end of the show, per our insider, Swift and company went backstage and left through the stage door. Before getting into her car, Swift flashed a smile at her adoring fans. A few minutes later, Madonna was also seen leaving through the same stage door.