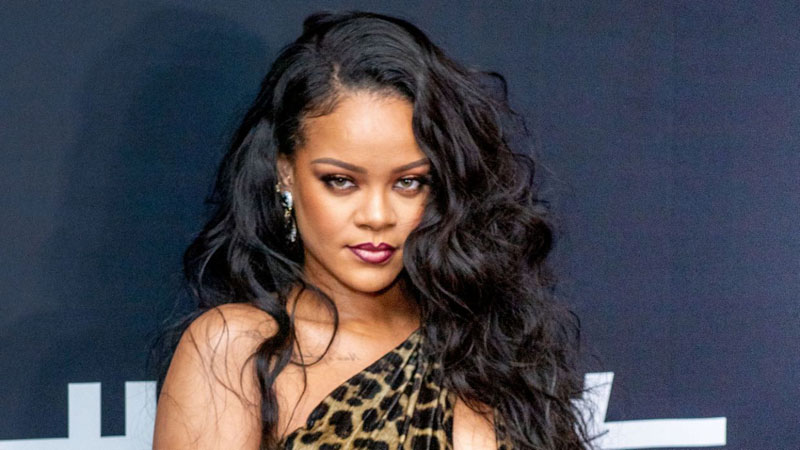 The Rihanna Navy asked, pleaded, begged for an album and Rihanna delivered – sort of.

Last Tuesday, the pop star, designer and entrepreneur announced Rihanna, a coffee table-ready photo album – or, in her words, “visual autobiography” – featuring over a thousand photos taken of her throughout her life, largely in the past decade of her career. Many of the photos across the 504-page tome would be made public for the first time ever, and to top it all off, the book would come in three limited editions with very Rihanna-worthy names: “This Shit Is Heavy,” “Drippy + the Brain” and “Stoner.”

On Friday, singer and songwriter Rihanna shut down New York’s Guggenheim Museum for an industry-studded book party – a testament to, more than anything, how many business pools the singer has dipped her toes into. Executives and staffers from her book publisher Phaidon, her label Roc Nation, her cosmetics and fashion brand Fenty, and a myriad of brand partnerships mingled in all-black outfits in the Guggenheim lobby, drinking champagne and eating fried macaroni canapes half an hour before the event’s official start time.

Rihanna superfans may have been disappointed in having to wait longer for her reggae-inspired album, but they received an above-average consolation prize. Fans were able to purchase a limited number of tickets through a private Eventbrite link, which was later made public and as the clock drew closer to 8pm, the museum lit up in colour as hordes of young, well-groomed people in paisley suits and Gucci perfume filed inside.

While guests waited for Rihanna herself to appear, they could climb up the Guggenheim ramp to peruse the museum’s main exhibit – Artistic License, in which six artists create their own interpretations of works in the Guggenheim’s main collection – or they could wander to one side of the lobby where about a dozen copies of Rihanna were on display for guests to flip through. Standard-edition copies were laid out flat on a long bench, while four copies of the Fenty x Phaidon edition (aka “This Shit Is Heavy”) rested on Haas Brothers-designed bookstands, modelled after Rihanna’s own outstretched palms.

The books are, indeed, quite heavy, but the standard and Fenty x Phaidon editions of Rihanna on display were about the same size, 16-and-a-half inches tall and a little over a foot across. The event’s pièce de résistance, though, was an enormous copy of the black fabric-bound Luxury Supreme edition, signed by Rihanna and resting on a custom-made “Drippy + the Brain” stand: a huge, bespoke black fabric cushion, covered in squiggling folds designed to look like the texture of the human cerebrum, and surrounded by a gold toned, cast-resin border with finger-like protrusions. Anyone who wanted to touch the Luxury Supreme copy had to wear gloves, a handler for the book repeatedly told guests, along with a harrowing set of stats: “measuring 4 ¾ feet across,” “weighing 126 pounds with the stand,” “200 copies made,” “retailing at $5500.”

Rihanna super fans may have been disappointed in having to wait longer for her reggae-inspired album, but they received an above-average consolation prize. Fans were able to purchase a limited number of tickets through a private Eventbrite link, which was later made public and as the clock drew closer to 8pm, the museum lit up in colour as hordes of young, well-groomed people in paisley suits and Gucci perfume filed inside

Flipping through the book gives one a glossy chronological depiction of Rihanna’s life, starting with a two-page fold-out collage of early childhood photos, report cards, and newspaper clippings from when “Pon de Replay” first arrived on the pop charts, and moving on through tour diaries, vacation snapshots, and photoshoot outtakes from moments already familiar to those well-versed in Rihanna’s world, such as when she ate chicken wings while wearing a sheer Swarovski-encrusted gown at the 2014 CFDA Fashion Awards. There’s very little text, aside from the occasional image credit or title pages for different chapters in her career, but letting the images speak for themselves is more than sufficient. Even for those who aren’t obsessed with the pop star’s every move, it’s a gorgeous collection of photographs (although, at $150 for a standard copy, it asks for a certain level of devotion), and the sheer number of never-before-seen, high-quality images prompts speculation as to whether or not Rihanna has her own temperature-controlled archive in the same vein as Beyoncé. 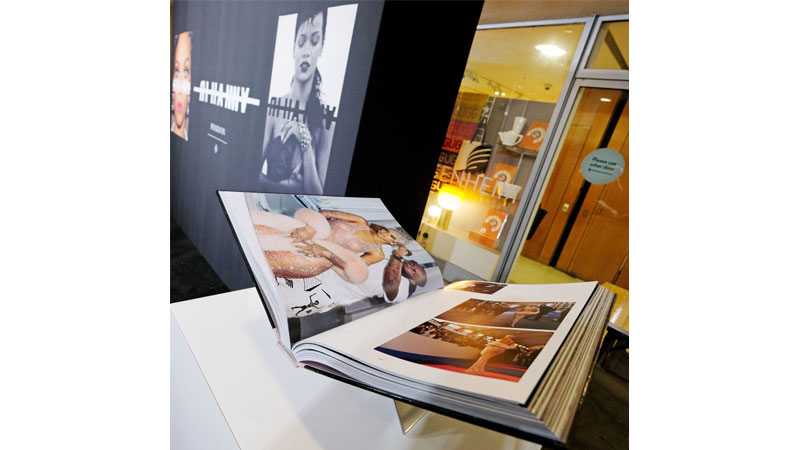 Speaking of Rihanna’s every move, the woman herself finally appeared through the main entrance, surrounded by a small entourage of bodyguards and her core collaborators but otherwise unannounced. It took all of 15 seconds for the fans in the room to show themselves and mob around her, screaming her name, but Rihanna took it in stride. Dressed in a Yves Saint Laurent leopard-print cutout dress with maroon snakeskin boots and wavy hair falling past her shoulders, she strode nonchalantly through the crowd of her admirers to give handshakes and hugs and flip through copies of her own book, before heading to the circular bar in the center and ordering champagne with orange juice. (If you were lucky enough to be near her path, you’d find that the rumours are true: she smells amazing, like the best powdered-sugar guava pastry in the world.)

The museum’s unique design and the hodgepodge crowd of Navy-level stans amongst schmoozing industry execs proved a challenge for her security team. It took an Oceans 8 series of manoeuvres using the Guggenheim’s elevators to get Rihanna up to the fourth floor, in a section set aside for her to mingle with her VIP guests, including writer/comedian Lena Waithe, Fenty junior creative director Jahleel Weaver and a duo that looked suspiciously like the Olsen twins. Just as fans, who had been craning their necks up towards the ceiling, began to relax a little and dance to the DJ’s playlist of quintessential Mariah Carey hits, Rihanna scurried back in the elevator and down to the ramp just above the museum lobby fountain, where finally, on her own makeshift stage, Rihanna could deliver her thank-you speech.

Along with thanking her creative team, business partners and other collaborators – including her childhood friend and “bestie” Melissa Forde, who got the loudest cheer of the night from fans – Rihanna paid special homage to the venue she’d chosen. “I want to thank the Guggenheim not only for having us here, but to share this piece of art,” she said of her book, “and have it be among the art that has been at the Guggenheim since 1959.” She said this, appropriately, while standing in front of the entrance sign for Artistic License, an exhibit that puts the focus on newer generations of artists giving their own interpretations of the canon.

Whether or not you believe a luxury photobook by a celebrity belongs in a museum, the Rihanna Navy certainly thought so. And as a surprise treat for them, Rihanna announced that everyone in attendance would be getting a standard-edition copy of Rihanna as they exited the building. Granted, this wasn’t the most practical party favour; guests who were planning on taking the subway home from Manhattan were suddenly saddled with a book that weighed as much as a small child, delivered in a comical black briefcase. For an event as mythical-sounding as Rihanna strolling through the Guggenheim, it was a reminder of just how far the influence have carried beyond the club singer from Barbados.