Wow, what an embrace it was! None could deny that that profoundly warm embrace between the heads of two major business partners and strategic allies, the US and India, and their strongly clasped hands on the mammoth stage set up at the rally of around 50,000 people, held at the NRG Stadium, Houston on September 22, 2019, conveyed a very strong and lucid message to Pakistan in particular, and the world in general, how close the two countries were to each other. 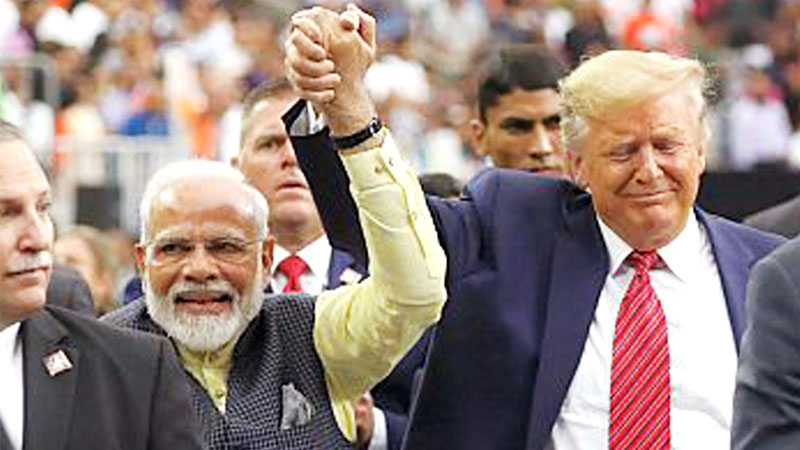 Strategic interests of the two countries apart, the basic reason why I termed this unequivocal demonstration of warmth and affection between the two leaders, US President Donald Trump and Indian Premier Narendra Modi as a ‘multibillion-dollar embrace’ is because of the extremely strong economic bond that the US has with India. It is a known fact that India is a huge market for the US for sale of sophisticated military hardware and other advanced technology. The US has sold billions of dollars worth of military hardware to India not in the too distant past. The fact of the matter is it is gearing up to sell yet more, worth billions, in the immediate future.

The Trump-Modi meeting in Houston on September 22, and on the sidelines of the UN General Assembly session on September 23, 2019, if I may equitably conclude, should be ominous for Pakistan, particularly in the backdrop of the ongoing Indian-occupied Kashmir (IoK) imbroglio. To be more specific, the signals emanating from both sides during the meet were profoundly lucid and indisputable. Should Pakistan still pin hopes for strong and concrete support from the US vis-à-vis resolution of the hopelessly nerve-wracking problem of the IoK? Does Pakistan have the choice to think otherwise? Apparently, it doesn’t. This then leaves Pakistan with the only option to keep endeavouring to convince the US that the IoK is a serious flashpoint which, on being ignited, could potentially engulf not only the region but, perhaps, the entire world into a catastrophe beyond the imagination of all and sundry across today’s peace-starved, turmoil-ridden world.

In the backdrop of this uneasy fact, the situation tends to become more desperate when others too join the ranks for economic reasons, and shy away from unequivocally supporting Pakistan on the IoK tragedy. It is a tragedy that perhaps has no parallel in the recent world history. I had penned the names of some of the Islamic countries, including Saudi Arabia and the UAE, in one of my articles titled “Despicable Kashmir debacle: why this lukewarm world response?” published in some eminent English dailies on August 28-31, 2019. Unfortunately, very strong ‘economic relations’ of these countries with India seem to have taken precedence over what is known as ‘principles’. It has become abundantly clear that for purely economic reasons response of these countries to Pakistan’s clarion call for support to the Kashmir cause was extremely subdued and, therefore, highly demoralising.

The UN and the US, in particular, and the world community, in general, seem to have failed to appreciate that there is something else that is equally significant as the economic interests of any nation, and that is principles. Any nation that compromises on its principles, for self-interest or whatever reasons, is bound to lose its respectability in the comity of respected world nations in the long run.

The Kashmir imbroglio should be of vital interest and concern to the entire world. Why should it be so? Because Kashmir is a dangerous flashpoint that could potentially lead Pakistan and India, the two globally recognised nuclear powers of the region, to a catastrophic nuclear war. And, God forbid, if that happens it would devastatingly engulf not only the region but also perhaps the entire world eventually. It is this vitally important factor that apparently hasn’t yet crossed the minds of the powers that be. The world community remains insensitive to the developments taking place in the IoK. The brutalities being brazenly committed by over 500,000 Indian troops in the occupied valley, particularly during the past decade or so, apparently don’t seem to have made any impact on the sleepy conscience of the civilised world.

The present state of affairs compels one to ponder why the UN, the US, the powers that be, in particular, and the civilised world, in general, remain hopelessly unmoved by the nerve-wracking episodes in the IoK. Doesn’t their silence speak volubly about their double standards in dealing with issues of international interest and significance?

Under the circumstances, one is compelled to ask the self-proclaimed civilised world and propagators of peace, justice and democracy: would they have demonstrated the same apathy and insensitivity had any European nation, or people belonging to any other religion, been subjected to such unparalleled atrocities as being unremittingly committed by the treacherous Indian forces on the innocent people of IoK? No, certainly not. They would have not only profoundly condemned but also taken immediate cognizance of the issue and adopted stringent measures for its permanent resolution.

The Kashmir imbroglio should be of vital interest and concern to the entire world. Kashmir is a dangerous flashpoint that could potentially lead Pakistan and India to a catastrophic nuclear war

To endorse this opinion of mine may I have the privilege to draw the attention of the readers towards my earlier article titled “World conscience in deep slumber while Kashmir bleeds” published in a number of eminent national dailies of the country from September 12, 2019 onward? In the referenced article, I had explicitly mentioned the names of two countries that emerged on the map of the world as independent states in the not too distant past: East Timor and South Sudan. With unequivocal support of the United Nations and equally strong support of the world powers, East Timor got its independence from Indonesia in 1999, and South Sudan gained independence from the Republic of Sudan in 2011. I wouldn’t endeavour to go into the details of how these two countries were able to ultimately attain their freedom from the clutches of their subjugators, as the details have been penned in my article referred above.

Over two months have passed by with no remission whatsoever in the human rights abuses and brutalities being audaciously committed by the ruthless Indian forces on the innocent people of the IoK. While the incumbent Indian government of Modi is seeking world support against terrorism, India itself is overtly involved in committing state terrorism in the IoK.

The United Nations, the US and majority of the world nations continue to harp the same tune that it has been harping since the past over seven decades: urging Pakistan and India to get down to the negotiating table and hammer out the grave issue of the occupied Kashmir through bilateral negotiations. The UN and the world community must appreciate that India has obstinately been against bilateral negotiations, particularly in respect to the IoK issue. On the other hand, Pakistan, as known to the entire world, has been consistently inviting India for a dialogue on all issues, including the issue of the IoK, only to be repeatedly shunned by India. Shying away from talks by India makes it abundantly clear that it is not at all prepared to resolve the Kashmir issue through bilateral negotiations. Why then the UN, the US and the other world nations are adamant that Pakistan and India should endeavour to resolve the long-drawn and menacing problem of the IoK through mutual dialogue?

The world community must realise that the critically perilous Kashmir dispute can never be resolved through a dialogue between Pakistan and India. It must be resolved in accordance with the charters of the UN and the UN Security Council Resolution of 1948 on the occupied Kashmir, the Resolution that cogently declares IoK a disputed territory and grants the right of self-determination to the people of the occupied territory. Wouldn’t it then be justified to ask the UN, the US and other world powers to exercise their influence on India, as it did in the case of East Timor and South Sudan, and compel it to implement the UN Resolutions vis-à-vis the occupied Kashmir in letter and spirit? They must press India to hold a plebiscite in IoK under the supervision of the UN forthwith, and let the people of the IoK decide their own fate?

The writer is an Islamabad-based political analyst and freelance columnist