This is a timely and important contribution of historian Yogesh Snehi who teaches at the School of Liberal Studies, Ambedkar University Delhi. Synthesis and syncretism predate the advent of Islam and the Sufis in the Indian subcontinent. This is a very distinctive if not unique feature of the plural cultural and civilization ethos of this region. Hinduism, notwithstanding its divisions of varnas and castes, accepted plurality of deities. Buddhism and Jainism were in the ancient period two major challenges to the status quo. After the arrival of Islam and especially Sufism a new cultural system was established, which too adapted to the proto-plural format of the subcontinent. 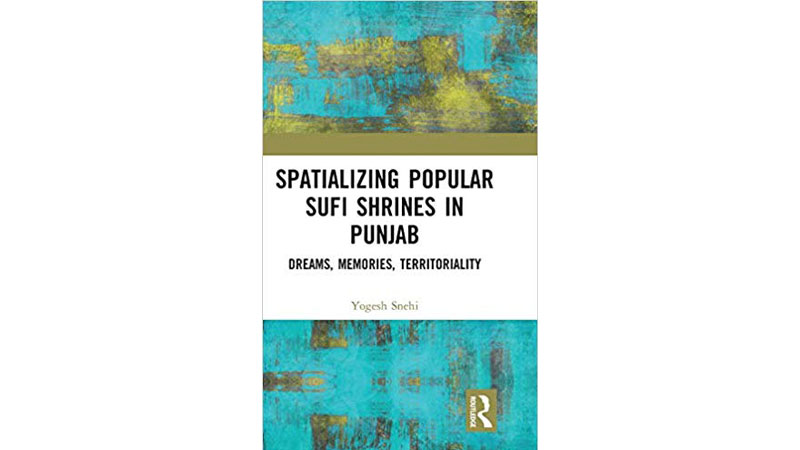 The teachings of Sufis, Gorakhnathi Yogis, the Bhakhti Sants and the Sikh Gurus converged on the idea of one Creator or Spirit permeating all forms of life, notwithstanding monist or pantheist manifestations. In Sufi parlance it was expressed as, Wahdat-ul-Wajud, which inevitably resulted in learning from one another, synthesis and syncretism. Nowhere else was such interaction more deeply rooted among the people than in the Punjab.

The author’s point of departure is to widen and deepen the scope of the role of Sufi shrines in the cultural heritage of the Punjab. He goes beyond conventional study of formal texts, architecture (of shrines), annual pilgrimages and the hagiography of saints. His directs his focus on the linkages and interconnectivity which the Sufi Shrines represent spatially. By spatiality he means the networks which the shrines generated. His notion of spatiality includes both time and space and takes cognition of networks of trade, migration, demography, rural settings, existing religious settings and other such factors which together constitute a greater social and cultural world than a study merely of the texts, rituals and practices. To the notion of spatiality are added dreams, memories and dissent.

Such an approach is most fruitful because no other region apart from Bengal on the other end in the north-east of the subcontinent has undergone cumulative change and transformation since at least the nineteenth century when the Mughal Empire went into irreversible decline and instead in the Punjab the Kingdom of Lahore was founded by Maharaja Ranjit Singh. The 90 years of British rule wrought vast changes in not only the methods and procedures of government and administration, but also economy and class structure as well as topography and demography. For example, during British rule much of western Punjab, which was desert and semi-desert was transformed through the biggest irrigation system of the world at that time consisting of canals and water barrages. It was accompanied by the transfer of population from several overpopulated districts of eastern Punjab into the canal colonies in western Punjab.

However, such drastic transformation received severe jolts with the bloody rupture of the Punjab at the time of Partition in 1947 between India and Pakistan. Nearly 800,000 Hindus, Muslims and Sikhs were killed. Of the 34 million population of the undivided Punjab, which included both the British-administered 29 districts as well as the princely states, at least 10 million crossed the border in search of safe havens and none could return to their hearths and homes afterwards.

Amid all that upheaval the physical remains of the Sufi saints and their shrines remained put, but not their devotees. As is well-known the Sufi shrines have historically been objects of pilgrimage for not only Muslims but also Hindus and Sikhs. After the partition the possibility to visit the shrine became increasingly difficult depending on which side of the border their devotees were placed. Memories and dreams as well as well as dissent and innovation became the vehicle through which the trauma of partition and separation was sublimed among devotees of the saints.

Ajay Bhardwaj had in his celebrated documentary Kite Mil We Maahi, already shed light on the continuity and change in the role of the Sufi shrines in the overwhelmingly Hindu and Sikh environment of East Punjab. He focused on the Punjabi Dalits who have turned to Sufism as a means to create an alternative narrative from the one represented by the upper castes subscribing to Hindu and Sikh orthodoxy. The Qadri and Chishti orders especially have remained popular in the Indian Punjab and their Hindu and Sikh devotees have remain in touch with their Muslim peers and gaddinashins (incumbents or successors of the Sufi founders of the network)

Yogesh Snehi shows that that the Sufi shrines and their devotees are to be found at all levels of society including Jats and Rajputs. In that sense, the role and hold of Sufi shrines in the day-to-day life of the people of East Punjab is far greater the marginalized phenomenon of Dalit urge for social elevation and higher self-esteem. He notes that the right-wing Sikh religious establishment discouraged the Sikhs, Jats and Mazhabis, from taking part in Sufi activism and networks but such pressure has not been successful.

Several case studies are included. Among them the legend of Sakhi Sarwar, a 13th century Sufi buried in Dera Ghazi Khan in southern Punjab on the border of the Balochistan hills attracted my attention especially. During my research on the partition of the Punjab I met an elderly Hindu gentleman Amrik Chand Ahluwalia who told me that as a child he remembered going with his father to faraway Balochistan to the urs (annual festival) of Sakhi Sarwar. What amused and touched me was that he said that although he was a Hindu, he ate only halal meat which he could buy in Patiala. His story is in my book and many others which testify to the existence of at least two societies or three societies or social orders in the Punjab.

The upper- caste, upper class, the ordinary urban and small-town middle class and the vast segment of rural society. We learn from Snehi that the urs of Sakhi Sarwar is celebrated in several places in the Indian Punjab and in the adjoining states. Shrines purported to represent Sakhi Sarwar have been built and the incumbents to the status of guardian Sufi is occupied by Hindus, Muslims and Sikhs. This is true of several other case studies included in the study. The book includes many pictures, sculptors and drawings – all representing popular or peoples’ art. I wonder if a comparable study has been undertaken in the Pakistani Punjab.

The contrast between the high culture of Sufi shrines represented by states and governments and the little or peoples’ culture is striking. The former is text-bound and focuses on formal rituals while the latter represents what is broadly known as the’ ways of life’ or ordinary people. In politics the former invariably prevails but the latter continues to survive one way or another.