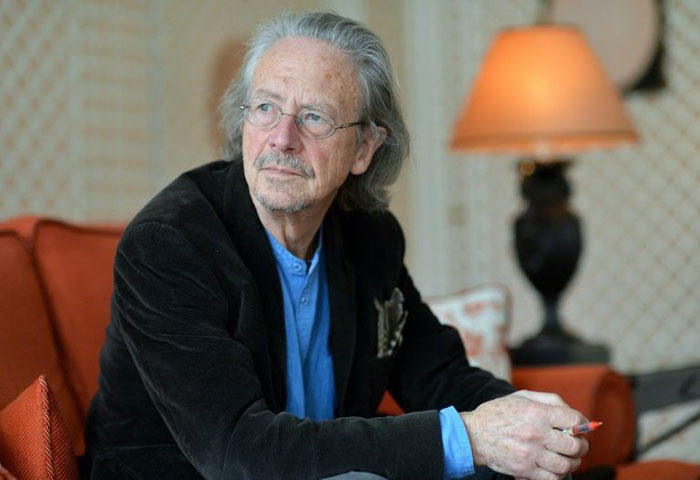 Austrian Peter Handke, one of the most original German-language writers alive, once used his famously sharp tongue to call for the Nobel Prize in Literature to be abolished.

The prize brings its winner “false canonisation” along with “one moment of attention (and) six pages in the newspaper,” the novelist, playwright, poet and translator told Austrian media in 2014.

It was not the first time that Handke had shown himself to be an iconoclast. He has described Thomas Mann, a giant of German literature and a 1929 Nobel laureate, as a “terribly bad writer” churning out “condescending, snotty-nosed prose”.

But what really appalled many peers and fans was his attendance at former Serbian president Slobodan Milosevic’s funeral, and his sympathy for the Serbs in the 1990s Yugoslav wars.

Handke was born in Griffen in southern Austria during World War II on December 6, 1942 to a German soldier father and a mother from Austria’s Slovenian minority.

After a few early years in Communist East Berlin, Handke grew up back in Austria, and first discovered his love of writing while contributing to the magazine of his hated Catholic boarding school.

He burst onto the literary scene in 1966 with his novel “The Hornets” and with a play, “Offending the Audience”, in which four actors dissect the nature of theatre and then turn on the audience.

That success led him to kiss goodbye to his law studies and write full-time. He has never looked back, leading a peripatetic existence and writing prolifically.

He has also been no slouch in film-making, cooperating several times with German director and close friend Wim Wenders. Many of their works explore themes such as loneliness and mortality.

In 1972, Wenders adapted Handke’s novel “The Goalkeeper’s Fear of the Penalty” about a goalie who is sent off during a match and later commits a murder.

The pair also worked together in the 1987 cult classic “Wings of Desire”, about a pair of angels roaming Berlin.

In the 1990s Handke emerged as a vocal defender of the Serbs in the bloody break-up of Yugoslavia, even comparing them to the Jews under the Nazis, a remark he later retracted.

His 1996 travelogue “A Journey to the Rivers: Justice for Serbia”, caused a storm, and in 1999 he returned Germany’s prestigious Buechner prize in protest at NATO’s bombing of Belgrade.

At the 2006 funeral of Milosevic — who died while on trial for crimes against humanity, and who wanted Handke to testify in his defence — the writer made a speech in front of thousands of mourners.

Some stood up for Handke, including Nobel-winning compatriot Elfriede Jelinek. But many others, from Susan Sontag to Salman Rushdie, lined up to lambast him.

German poet and essayist Hans-Magnus Enzensberger, noting Handke’s 1960s firebrand past, said it was “a paradox that the remnants of the peace movement are running around with supporters of mass murder”.

In 2006 an outcry forced him to reject another German prize — the Heinrich Heine award — and the Comedie-Francaise theatre in Paris refused to put on one of his plays.

And when, in 2014, he came to collect the Ibsen prize in Norway, he was greeted with demonstrators chanting “fascist” and holding “Genocide-denier” placards.

“What an indignity!” Handke told the Austria Press Agency afterwards. “Not for me, but for the seriousness of writing.”

At 76 and with a mane of grey hair, Handke remains active and currently lives in Paris. His last novel was published in 2018.

The Wenders-Handke creation, “The Beautiful Days of Aranjuez”, competed at the Venice Film Festival in 2016.

“Without him I would perhaps have become a painter,” Wenders said.