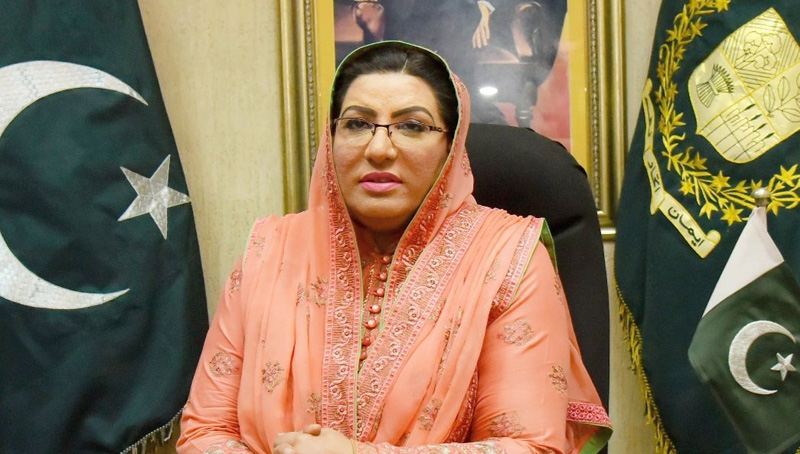 Special Assistant to the Prime Minister on Information and Broadcasting Dr. Firdous Ashiq Awan Wednesday said the revival of the country’s major export-oriented textile sector due to best policies of the PTI government was best answer to the critics, always objecting economic planning of the government.

She stated this in a news conference along with All Pakistan Textile Mills Association (APTMA) Group Leader Gohar Ejaz and Taskforce on Textile Chairman Ahsan Bashir here at APTMA House.

APTMA Group Leader Gohar Ejaz acknowledged that the present government resolved textile sector’s revival issues pending for the last 10 years, citing that the government ensured energy tariff to textile industry at par with regional and other competitor countries. Taking advantage of viable energy tariff, the country’s textile industry registered 32 percent quantitative growth in exports and its total turnover remained at US $ 16 billion with US $ 13 billion export revenue and the industry earned US $ one billion net profit, besides paying Rs 40 billion taxes till June 2019, he told.

The APTMA leader mentioned that earlier, the textile industry was closing down but now it was planning to set up new textile units due to government’s support and viable policies.

On this occasion, Dr. Firdous Ashiq Awan said, “You see, this is not the government claiming of industrial revival due to its well-conceived economic policies, but the industrialists are admitting they were doing robust business, which not only benefited the industrialists, investors and traders but also millions of labourers attached with this sector”. This fact proved the government’s direction on economic front and it should be an eye-opener for those critics who through media and other forums, always talking loud of poor economic policies, which they claimed jeopardizing the country’s industry, trade and exports, the Special Assistant said.

She added that Prime Minister Imran Khan was striving hard to steer the country out of obsolete and out-dated system that had for the last many decades been delivering nothing for the public good but strengthening the status quo that was detrimental for economy and institutions. That was why, she added, the Prime Minister was advocating for effective institutional reforms and elimination of status quo as well as across the board accountability to grasp the menace of corruption, which had since long been eating up the vitals of the country by obstructing the way of best governance and better service delivery to the common man.

The Special Assistant said, “Change has never been accepted easily by anyone but one’s firm determination and good intention makes it easy. The PTI government has the firm resolve to bring positive changes for public welfare, as evident from the fact that the Prime Minister took the ownership of industrial revival and has been removing all bottlenecks in this regard while taking all stakeholders aboard. Our sincere efforts and measures are now bearing tangible economic results”.

Dr. Firdous added that the present government had introduced inspector-less regime for ease of doing business, as industrialists had been facing officials of 37 departments for matters regarding setting up of new units, exports, operations and taxes. The government had decided to automate the process of getting departmental No Objection Certificates (NOCs), verification of documents etc. and now the industrialists and businessmen were availing all such facilities online, and today, its better results were eminent, she continued.

Contrary to this, she mentioned, Pakistan recorded zero percent growth in exports during last five-year tenure of the political opponents of PTI, asserting that one could well-judge the previous government’s governance, economic policies and performance as it had left behind US $ 40 billion trade deficit in addition to other challenges of economy.

She said that the Prime Minister was now visiting China and holding meetings with Chinese leadership to enhance volume of bilateral trade manifold. Since Pakistan was playing a key role in the futuristic project of China-Pakistan Economic Corridor (CPEC) as it would have far reaching benefits for Pakistan’s economy. Top leadership of both the countries was also deliberating upon various projects, joint ventures, technology transfer and investment opportunities, she added.

Both the leaders also called for taking practical steps to end curfew imposed by India in Occupied Kashmir, she said and asserted that China had appreciated and supported Pakistan’s efforts for the restoration of peace in Afghanistan.

Responding to reporters queries, Dr Firdous Ashiq Awan said that political and national narratives together made Pakistan’s narrative but Maulana Fazlur Rehman was heading towards the other way instead of standing with the country’s narrative.

She said the present government was committed to making students of religious seminaries (Madaris) as great asset of Pakistan, and this factor irked the Maulana as he could no longer use this precious segment of youth to serve his personal political interests.

To another question, she said Prime Minister Imran Khan had highlighted the real picture of Islam in a very comprehensive manner at the United Nations General Assembly (UNGA), the highest forum of the world, and now Maulana Fazlur Rehman had no grounds to fulfill his political whim in the name of Islam. Presently, she mentioned, Indian media was giving wide coverage to Maulana Fazlur Rehman, which proved the fact that he was adhering to narrative of conspiracy, political adventurism and personal interests. “We have no objection on the JUI-F led opposition parties’ peaceful protest but its timing is awkward,” she said and explained that entire Pakistani nation decided to show solidarity with their Muslim brethren of Indian Held Kashmir on that day, therefore, the Maulana should stand with the narrative of Pakistan.

To a query, Dr Firdous argued that what the people, who had enjoyed ancestral rule for decades, so far gave to Pakistan and its people, and gained what from Pakistan for their own children, citing that someone bought Surrey Palace and some bought Avenfield for their kids due to which today millions of children of Pakistan were deprived of their even basic rights especially access to education. Keeping all these realities in mind, she said, Prime Minister Imran Khan wanted overall reformation of the system and elimination of black sheep in all sectors through effective accountability to transform the governance system that was centric to the people’s welfare and service.

The special assistant also congratulated the APTMA office-bearers for making massive development in the textile sector and felicitated Ahsan Bashir for becoming chairman of the Taskforce on Textile.